Use of this site indicates acceptance of the Privacy Policy and Terms of Use.
The information on this Website is not reliable and not intended to provide tax, legal, or investment advice. Nothing contained on the Website shall be considered a recommendation, solicitation, or offer to buy or sell a security to any person in any jurisdiction.
CEO.CA members discuss high-risk penny stocks which can lose their entire value. Only risk what you can afford to lose.
© 2022 - CEO.CA Technologies Ltd.
@nasdaq/taat-preparing-to-launch-in-switzerland-to-capitalize ↻
0 online
Today This week
Search Subscribe
Members of @nasdaq/taat-preparing-to-launch-in-switzerland-to-capitalize

by @nasdaq on 6 May 2022, 16:01
TAAT® Preparing to Launch in Switzerland to Capitalize on New Competitive Advantages

LAS VEGAS and VANCOUVER, British Columbia, May 06, 2022 (GLOBE NEWSWIRE) -- TAAT® GLOBAL ALTERNATIVES INC. (CSE: TAAT) (OTCQX: TOBAF) (FRANKFURT: 2TP) (the “Company” or “TAAT®”) is pleased to announce that it is working with a tobacco distributor that has a presence in Zurich and Zug to coordinate a near-term launch of TAAT® Original, Smooth, and Menthol in Switzerland with a primary objective of capitalizing on recent changes to Switzerland’s market landscape causing tobacco brands to be prohibited from advertising in public places. Although tobacco advertising has long been banned in most Western markets, Switzerland was among the last to allow tobacco product advertisements in public spaces (e.g., on billboards, in movie theatres, and at events such as music festivals). On February 13, 2022, voters in Switzerland overwhelmingly approved legislation forbidding tobacco companies from advertising in public spaces1.

A photo accompanying this announcement is available at https://www.globenewswire.com/NewsRoom/AttachmentNg/cddd3181-f921-4051-8fda-3808054c7d22

The Company has been exploring several launch opportunities throughout Europe, particularly after finalizing the advanced formulation of Beyond Tobacco™ using reconstituted material. In a press release dated September 3, 2021, TAAT® announced that the advanced Beyond Tobacco™ formulation yielded excellent feedback from tobacco wholesalers in markets to include Germany, Poland, France, and Switzerland. Pending final regulatory approval of the TAAT® product by Swiss authorities, the Company expects Switzerland to be the first new international market to be added for TAAT® in 2022 following the pending finalization of a distribution agreement and initial purchase order. Switzerland currently has a higher adult smoking rate than the European average at 27%2; more than double the national rate of 12.5% in the United States3.

As TAAT® is a non-tobacco product, the Company benefits from an extensive range of freedoms with respect to its ability to market through public-facing media in markets where tobacco advertisements are restricted or disallowed. In the United States, TAAT® has advertised its brand as a better alternative to tobacco cigarettes through methods such as in-store displays at the point of sale, as well as sports sponsorships (e.g., a stock car racing team, the entourage of world champion boxer Floyd Mayweather). The Company intends to strategically place German-language advertisements such as the mockup shown below as part of its launch plan in Switzerland, with French-language variations for markets in western Switzerland such as Geneva, the country’s second-ranking city by population.

TAAT® Founder Joe Deighan commented, “As the tobacco industry continues to evolve, it is a major part of our playbook to jump on opportunities to do things that tobacco companies cannot do as a way for TAAT® to gain a competitive advantage. Switzerland was already a target market for a future TAAT® launch due to its relatively high adult smoking rate of 27% and its optimal location in the centre of Europe, sharing a border with five other nations. However, with Switzerland set to put an end to tobacco advertising based on a vote for new legislation last quarter, we recognized this impending change for the timely opportunity that I believe it to be. We are working closely with a Swiss tobacco distributor who is now in the final stages of obtaining government approval for TAAT® to be sold in Switzerland, and I am excited for the next steps as we continue to build out our tobacco industry footprint.”

The Company has developed TAAT®, which is a tobacco-free and nicotine-free alternative to traditional cigarettes offered in "Original", "Smooth", and "Menthol" varieties. TAAT®'s base material is Beyond Tobacco™, a proprietary blend which undergoes a patent-pending refinement technique causing its scent and taste to resemble tobacco. Under executive leadership with "Big Tobacco" pedigree, TAAT® was launched first in the United States in Q4 2020 as the Company seeks to position itself in the $812 billion1 global tobacco industry.

Disclosures relating to investor relations firms retained by TAAT® Global Alternatives Inc. can be found under the Company's profile on http://sedar.com. 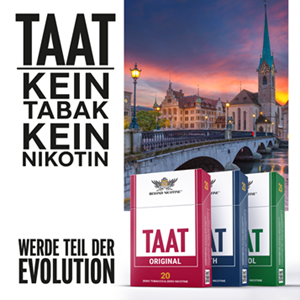 In the 2020s, tobacco advertisements are rarely seen in Western markets due to long-standing bans on advertising of tobacco products. While TAAT® currently benefits from its ability to advertise in markets such as the United States as a non-tobacco product, voters in Switzerland only recently approved legislation to ban tobacco advertising in public spaces. The Company is therefore planning to launch TAAT® in Switzerland to capitalize on this potential competitive advantage by using tactics such as displaying advertisements (provisional design shown above for illustrative purposes) in public areas that are commonly visited by adult smokers.