Use of this site indicates acceptance of the Privacy Policy and Terms of Use.
The information on this Website is not reliable and not intended to provide tax, legal, or investment advice. Nothing contained on the Website shall be considered a recommendation, solicitation, or offer to buy or sell a security to any person in any jurisdiction.
CEO.CA members discuss high-risk penny stocks which can lose their entire value. Only risk what you can afford to lose.
© 2016 - Pacific Website Company Inc.
@nasdaq/teranga-gold-announces-a-27000-metre-drilling-and ↻
0 online
Today This week
Search Subscribe
Members of @nasdaq/teranga-gold-announces-a-27000-metre-drilling-and

(All amounts are in U.S. dollars unless otherwise stated)

TORONTO, July 25, 2019 (GLOBE NEWSWIRE) -- Teranga Gold Corporation ("Teranga" or the "Company") (TSX: TGZ, OTCQX:TGCDF) is pleased to announce an extensive drilling and exploration program during the second half of 2019 at Golden Hill, an advanced-stage exploration project that has delivered multiple near-surface and high-grade gold discoveries over the last two years. Teranga owns 100% of Golden Hill, which is located within the central part of the Houndé Greenstone Belt, a highly mineralized gold zone in southwest Burkina Faso, West Africa that is currently home to three operating gold mines.

Golden Hill’s budget for drilling and exploration in the second half of 2019 is estimated to be at least $5 million and will be financed by the Golden Hill tranche of the Taurus debt facility. This $25-million tranche is intended to advance the project through the feasibility stage of development.

Paul Chawrun, Chief Operating Officer, stated, “Our initial mineral resource estimate, announced in February 2019, provided a solid base from which to grow Golden Hill and reaffirmed our interpretations that most of the deposits comprising the resource estimation offer upside potential. The drill and exploration program announced today, which includes up to three drill rigs and approximately 27,000 metres of drilling, is part of our plan to increase resources as we move the project through a preliminary economic assessment and into the feasibility stage of development.”

The project currently includes numerous deposits and prospects within a 7.5-kilometre radius (Figure 1 in Appendix). This configuration is conducive to a multi-pit operation feeding into a centralized processing facility, similar to the Company’s Sabodala and Wahgnion gold operations.

During the first half of 2019, a number of preparatory surveys were completed at Golden Hill to further enhance understanding of potential extensions to the mineralization defined at the known prospects and deposits. The surveys also helped to identify new targets worthy of drilling evaluation. These activities included extensive soil sampling, excavator trenching and an airborne magnetic/radiometric survey.

The 27,000-metre exploration program is designed as a combined reverse circulation and diamond core drilling program. Currently, eleven separate drill targets have been identified for inclusion in this drilling evaluation program, including five that have not been previously drilled. In addition to the drilling component, approximately 15,000 metres of auger drilling and 10,000 metres of excavator trenching are also planned for this exploration campaign.

“Due to the demonstrated importance of structural controls on the gold zones at all Golden Hill deposits, we have focused our ongoing exploration efforts on identifying additional favorable structural trends that could add resources through drilling evaluations. A recently completed airborne geophysical survey has been key to identifying favorable structural targets and outlining a number of new priority areas for early-stage evaluations, including Gogoba West, Ma South, Ma Far North and Copper,” said David Mallo, Vice President, Exploration.

The Company has also commenced initial studies and test work in support of an anticipated preliminary economic assessment (“PEA”) at Golden Hill. Metallurgical test work has been underway at ALS (Perth). Upon completion of this test work to determine the basis for an optimized flowsheet for all of these deposits, PEA level engineering in conjunction with environmental social impact assessment baseline work will commence to determine an estimate of capital and operating costs that support an initial mine plan concept. This work will provide the basis for an economic assessment of the project and form the basis for a submission to the Government of Burkina Faso requesting the conversion of the Golden Hill exploration license to a mine license in 2020.

Cumulative drill results from all prospects within the Golden Hill project are included on the Company’s website www.terangagold.com under Exploration.

Teranga's Burkina Faso exploration programs, corresponding to the drill holes being reported herein, were managed by Peter Mann, FAusIMM. Mr. Mann was a full-time employee, of Teranga who recently retired, and is not "independent" within the meaning of National Instrument 43-101 – Standards of Disclosure for Mineral Projects (“NI 43-101”). Mr. Mann has sufficient experience which is relevant to the style of mineralization and type of deposit under consideration and to the activity which he is undertaking to qualify as a "Qualified Person" under NI 43-101. The technical information contained in this news release relating to exploration results is based on, and fairly represents, information compiled by Mr. Mann. Mr. Mann has verified and approved the technical information disclosed in this release, including the sampling, analytical and test data underlying such information in the form and context in which it appears herein. The reverse circulation and diamond core samples are assayed at the BIGS Global Laboratory in Ouagadougou, Burkina Faso.

The risks and uncertainties that may affect forward-looking statements include, among others: the inherent risks involved in exploration and development of mineral properties, including government approvals and permitting, changes in economic conditions, changes in the worldwide price of gold and other key inputs, changes in mine plans and other factors, such as project execution delays, many of which are beyond the control of Teranga, as well as other risks and uncertainties which are more fully described in Teranga's Annual Information Form dated March 29, 2019, and in other filings of Teranga with securities and regulatory authorities which are available at www.sedar.com. Teranga does not undertake any obligation to update forward-looking statements should assumptions related to these plans, estimates, projections, beliefs and opinions change. Nothing in this document should be construed as either an offer to sell or a solicitation to buy or sell Teranga securities. All references to Teranga include its subsidiaries unless the context otherwise requires.

Teranga is a multi-jurisdictional West African gold company focused on production and development as well as the exploration of approximately 6,400 km2 of land located on prospective gold belts. Since its initial public offering in 2010, Teranga has produced more than 1.8 million ounces of gold at its Sabodala operation in Senegal. Focused on diversification and growth, the Company is preparing for the first gold pour at its second gold mine, Wahgnion, which is located in Burkina Faso, as well as carrying out exploration programs in three West African countries: Burkina Faso, Côte d’Ivoire and Senegal. The Company had more than 4.0 million ounces of gold reserves as of December 31, 2018. Teranga applies a rigorous capital allocation framework for its investment decisions and is focused on funding future organic growth plans responsibly.

Steadfast in its commitment to set the benchmark for responsible mining, Teranga operates in accordance with the highest international standards and aims to act as a catalyst for sustainable economic, environmental, and community development as it strives to create value for all of its stakeholders. Teranga participates in the United Nations Global Compact initiative and a leading member of the multi-stakeholder group responsible for the submission of the first Senegalese Extractive Industries Transparency Initiative revenue report. 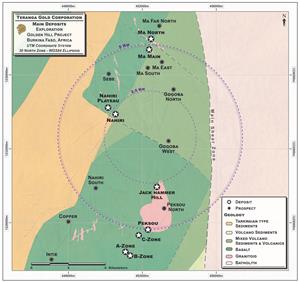 The project currently includes numerous deposits and prospects within a 7.5-kilometre radius.