Use of this site indicates acceptance of the Privacy Policy and Terms of Use.
The information on this Website is not reliable and not intended to provide tax, legal, or investment advice. Nothing contained on the Website shall be considered a recommendation, solicitation, or offer to buy or sell a security to any person in any jurisdiction.
CEO.CA members discuss high-risk penny stocks which can lose their entire value. Only risk what you can afford to lose.
© 2022 - CEO.CA Technologies Ltd.
@nasdaq/uk-tobacco-wholesalers-enthusiastic-about-taat-following ↻
1 online
Today This week
Search Subscribe
Members of @nasdaq/uk-tobacco-wholesalers-enthusiastic-about-taat-following

LAS VEGAS and VANCOUVER, British Columbia, Oct. 22, 2021 (GLOBE NEWSWIRE) -- TAAT™ GLOBAL ALTERNATIVES INC. (CSE: TAAT) (OTCQX: TOBAF) (FRANKFURT: 2TP) (the “Company” or “TAAT™”) is pleased to announce that several large-scale tobacco wholesalers in the United Kingdom have received TAAT™, and expressed a high level of enthusiasm about the product based on its several advantages compared to traditional tobacco cigarettes. In a press release dated September 29, 2021, the Company announced that more than 43,000 packs of TAAT™ arrived in London as part of over CAD $1,200,000 worth of purchase orders for the United Kingdom and Ireland issued by Green Global Earth (“GGE”). In less than one calendar year, the Company has placed TAAT™ in approximately 1,200 retail stores across the United States through strategies that it intends to employ as part of its first international launches of TAAT™ in markets to include the United Kingdom.

As a non-tobacco product, TAAT™ stands to benefit from freedoms that are not afforded to products containing tobacco or nicotine. Tobacco wholesalers in the U.K. who received TAAT™ throughout October 2021 noted that in-store promotional graphics can be displayed for TAAT™ to cultivate interest in the product among smokers of legal age, whereas such advertisements would not be permitted for tobacco cigarette brands. Furthermore, being exempt from certain taxes on tobacco and nicotine products, TAAT™ can be sold at a lower price point in the United Kingdom compared to leading brands of tobacco cigarettes; an especially important consideration in the United Kingdom where the average price for a pack of tobacco cigarettes is approximately double the average price in the United States (described in the Company’s April 30, 2021 press release). Additionally, tobacco product packaging laws in the United Kingdom require tobacco cigarettes to be sold in a uniform pack design with negligible brand-identifying elements such as colours and logos; though the Company’s distribution partners in the United Kingdom have confirmed the TAAT™ packs can be sold in a substantially similar format to the standard design currently used in the United States (bearing the respective colours of each TAAT™ variety).

A photo accompanying this announcement is available at https://www.globenewswire.com/NewsRoom/AttachmentNg/b9cae7f5-6a07-47c3-9b6c-de93e9dcb75b

Based on outcomes from the Company’s existing dialogues with tobacco wholesalers in the United Kingdom, TAAT™ intends to dispatch a full container shipment to the United Kingdom during Q4 2021, from which TAAT™ would be placed in retail points of sale to include supermarkets and convenience stores. As part of these dialogues, the Company is also forming a collection of in-store promotional graphics to include window decals, which can enable U.K. TAAT™ retailers to capitalize on their ability to promote the product to their patrons who are smokers of legal age.

TAAT™ Chief Executive Officer Setti Coscarella commented, “It is very exciting for us to be in these stages of executing the first international expansion of TAAT™. We have extensively discussed how we can be competitive in the United Kingdom based on price, pack design, and the merits of the product itself. One thing we have not gone into detail about, however, is that it appears to be much easier to launch nationwide in the United Kingdom, in the absence of the complexities of individual state and territory laws such as those commonly found in the United States. We look forward to finalizing our first international store placements with tobacco wholesalers in the United Kingdom as part of our next steps in building tobacco industry market share globally.” 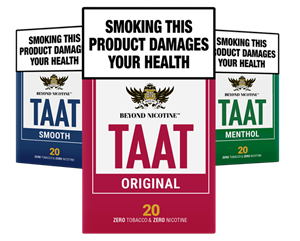