Use of this site indicates acceptance of the Privacy Policy and Terms of Use.
The information on this Website is not reliable and not intended to provide tax, legal, or investment advice. Nothing contained on the Website shall be considered a recommendation, solicitation, or offer to buy or sell a security to any person in any jurisdiction.
CEO.CA members discuss high-risk penny stocks which can lose their entire value. Only risk what you can afford to lose.
© 2021 - CEO.CA Technologies Ltd.
@nasdaq/vr-confirms-ree-mineralization-at-its-hecla-kilmer ↻
0 online
Today This week
Search Subscribe
Members of @nasdaq/vr-confirms-ree-mineralization-at-its-hecla-kilmer

by @nasdaq on 22 Jul 2021, 09:00
VR confirms REE mineralization at its Hecla-Kilmer copper-gold IOCG breccia target in northern Ontario, and finalizes plans for follow-up drilling in September

From VR’s CEO Dr. Michael Gunning: “It is an important step forward to see that the re-assay of our sample pulps for Hole 2 using a sodium peroxide fusion designed to optimize the analytical detection for all rare earth elements confirms their presence in the high density breccia zones intersected last fall. The >0.5% TREO concentrations meet the cut-off grade commonly applied to rare earth element mineral deposits, and the > 50 m widths attest to the scale that the H-K hydrothermal system is working at.

Beyond the details provided in the next section, I encourage readers to appreciate that the REE mineralization shown in Figure 3 at 580 m depth in Hole 2 is similar to that which occurs at surface in Hole 4 and shown in Figure 4; the explicit vertical extent of REE mineralization between the two drill holes speaks to the volume potential of the overall copper-gold IOCG hydrothermal breccia system at H-K.

Looking forward, the point of Figure 1 is to illustrate the obvious vector for follow up drilling this fall, towards the center of the 400 x 800m, 3.5 mGal gravity anomaly given the correlation of the REE mineralization to high density profiles in XRF data. That said, I remind our shareholders of the additional correlation in our XRF drill hole density data to local copper mineralization, which we illustrated in the previous news release. To be certain, follow-up drilling this fall will target the center of the large density anomaly to evaluate the potential for significant copper and gold within the fluorite-apatite-carbonate hydrothermal breccia system at Hecla-Kilmer for which an IOCG chemical affinity is clear in our data, including rare earth elements.

We have been working with the same key service providers from last year’s program with regard to camp, helicopter and drill for the past three months, and we are narrowing in on mobilization for late August. The goal is to replicate the strong daily production and overall cost efficiency of the 2020 program. As you can see in Figure 1, our framework for this follow-up drilling is for up to six holes and up to 3,000 m in total, which we anticipate to take 4-6 weeks to complete based on production last year.

We look forward to providing further updates as our exploration at H-K advances.”

REE mineralization was intersected in two drill holes in 2020, HK20-002 and 004, located on the eastern margin of a large gravity anomaly identified subsequent to drilling by a winter survey in March, 2021. The mineralization correlates with high density zones in XRF density profiles and occurs within potassic-altered hydrothermal breccia which comes to surface at the top of Hole 4, and in sodic alteration 550 m below surface at the bottom of Hole 2. Composite data for Hole HK20-002 are summarized in the table below.


Drill core photos and corresponding QEMSCAN images (Quantitative Evaluation of Materials by Scanning Electron Microscopy) are shown for each drill hole in Figure 3 and Figure 4. They reveal the differing mineralogy and habit of REE mineralization within the peripheral high temperature sodic alteration assemblage in Hole 002 and the more proximal, higher temperature potassic alteration in Hole 004. The potassic alteration style which comes to surface in Hole 004 (base of till) provides a strong chemical vector towards IOCG-type mineralization, and is the priority target for the drilling planned for this fall.

Hole 004 will be re-logged and sampled prior to the planned upcoming drill program in order to provide a complete characterization of REE mineralization intersected last fall on the eastern margin of the new gravity anomaly, and to provide a more complete correlation and calibration of geochemical data with XRF data, which is already apparent in the two data sets for drill hole 002.

Figure 2 is important. The high density gravity anomaly is discordant to the magnetic boundaries evident on the RTP total magnetic intensity map for H-K, and it overlaps with, but is offset from the center of the MVI anomaly (total magnetic vectorization inversion) at H-K derived from the 3-D inversion of the high resolution airborne data from 1993. As such, the high density mineralization at H-K, whether it is from copper, gold and/or rare earth elements relates to an evolved hydrothermal fluid that formed after the formation of primary magnetite during crystallization of the original igneous phases of the multi-phase alkaline igneous complex, and after secondary hydrothermal magnetite which itself is related to high temperature potassic alteration of the extensive, sulfide-bearing, fluorite-carbonate hydrothermal breccia system that is hosted within, but is destructive to the primary igneous complex.

Summary technical and geological information for the Company’s various exploration properties is available at the Company’s website at www.vrr.ca.

For the first phase of drilling at Hecla-Kilmer project, VR submitted drill core for Minalyze XRF scanning and sawn drill core samples for geochemical assay to the SGS Canada Inc. (“SGS”) laboratory facilities in Sudbury, Ontario, with final geochemical analytical work done at the SGS laboratory located in Burnaby, BC., including ICP-MS and ICP-AES analyses for base metals, trace elements and full-suite REE analysis, and gold determination by atomic absorption assay. Analytical results are subject to industry-standard

and NI 43-101 compliant QAQC sample procedures externally by the Company and internally at the laboratory as described by SGS.

Technical information for this news release has been prepared in accordance with the Canadian regulatory requirements set out in National Instrument 43-101. Justin Daley, P.Geo., Exploration Manager and Chief Geologist at VR and a non-independent Qualified Person oversees and/or participates in all aspects of the Company’s mineral exploration projects, and the content of this news release has been reviewed on behalf of the Company by the CEO, Dr. Michael Gunning, P.Geo., a non-independent Qualified Person.

The Hecla-Kilmer complex is located 35 kms southwest of the Company’s Ranoke property in northern Ontario. It is located 23 km’s northwest of the Ontario hydro-electric facility at Otter Rapids, the Ontario Northland Railway, and the northern terminus of Highway 634 which links the region to the towns of Cochrane and Kapuskasing along the northern Trans-Canada Highway located some 100 km’s to the south.

The H-K property is large. It consists of 224 mineral claims in one contiguous block approximately 6 x 7 km’s in size and covering 4,617 hectares. The property is owned 100% by VR. There are no underlying annual lease payments on the property, nor are there any joint venture or back-in interests. There is an industry-standard royalty attached to the property, including a buy-back provision to VR.

Like the Ranoke property, H-K is located on provincial crown land, with mineral rights administered by the provincial Ontario Ministry of Energy, Northern Development and Mines (MENDM). There are no annual payments, but the MENDM requires certain annual exploration expenditures and reporting. The property falls within the Moose Cree and Taykwa Tagamou First Nations traditional territories.

Hecla-Kilmer (“H-K”) is a multi-phase alkaline intrusive complex with carbonatite approximately 4 x 6 km’s in size and emplaced along the western margin of the crustal-scale Kapuskasing structural zone which bisects the Archean Superior Craton in northern Ontario. The opportunity for VR is to apply modern IOCG and carbonatite mineral deposit models and exploration technologies to H-K for the first time, ever. A shallow, six-hole diamond drill program was completed in 1970 as part of a regional base metal exploration program by Ashland Oil and Elgin Petroleum. One hole was abandoned, and only 854 m were completed in total in 5 holes, all on magnetic highs in the outer concentric zones of the complex. Selco Exploration Company completed two drill holes in 1981 on peripheral magnetic highs as part of a regional diamond exploration program, and intersected ultra-basic rocks and breccias in the outer, concentric zones of the multi-phase H-K complex. A high resolution airborne magnetic survey was completed in the region for diamond exploration in 1993, after the aforementioned drilling.

VR is an established junior exploration company focused on greenfields opportunities in copper and gold (TSX.V: VRR; Frankfurt: 5VR; OTCQB: VRRCF). VR is the continuance of 4 years of active exploration in Nevada by a Vancouver-based private company. The diverse experience and proven track record of its Board in early-stage exploration, discovery and M&A is the foundation of VR. The Company focuses on underexplored, large-footprint mineral systems in the western United States and Canada, and is well financed for its exploration strategies and corporate obligations. VR owns its properties outright, and evaluates new opportunities on an ongoing basis, whether by staking or acquisition.

For general information please use the following:

This press release contains forward-looking statements. Forward-looking statements are typically identified by words such as: believe, expect, plans, anticipates, intends, estimate, and similar expressions or are those which, by their nature, refer to future events. Forward looking statements in this release include but are not limited to: “The key aspects for the follow-up drill program are finalized, with mobilization currently planned for late August …”, and … “VR evaluates new opportunities on an ongoing basis, whether by staking or acquisition.”

Graphics accompanying this announcement are available at
https://www.globenewswire.com/NewsRoom/AttachmentNg/5fb6fb9d-2a1c-4021-9f97-438a14630c4f 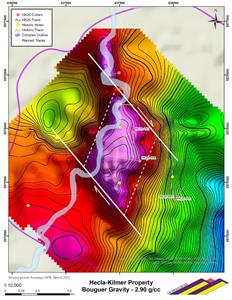 Locations of the drill holes completed by VR in 2020, and those planned for 2021, plotted on the residual gravity map derived from the ground-based survey completed in March, 2020. The white lines delineate the Riedel dilational structural geometry of the boundaries of the large, internally coherent, 3.5 mGal gravity anomaly. Three short drill holes from a cursory six-hole program in 1970 are also shown; two are located on the edge of the gravity anomaly which is now targeted as the source of gold and copper mineralization evident in drill core rubble pieces discovered in the field at the historic drill camp. 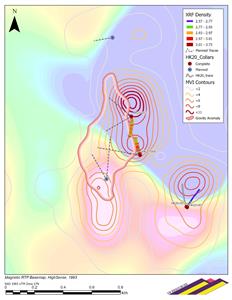 Outline of the 3.5 mGal gravity anomaly shown in Figure 1, and contours for the MVI magnetic inversion anomaly, plotted on an RTP magnetic base map. The anomalies are discordant to the RTP magnetic patterns which relate to the primary emplacement of the multi-phase complex at H-K. As such, high density REE mineralization is believed to be related to an evolved fluid late in the formation of an extensive, sulfide-bearing, fluorite-carbonate IOCG hydrothermal breccia system that is hosted within, but is destructive to, the original phases of the complex. 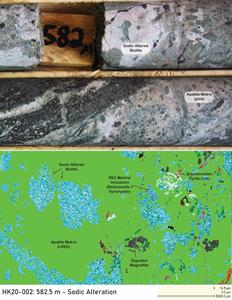 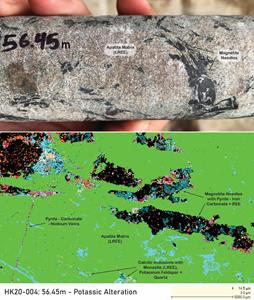