Use of this site indicates acceptance of the Privacy Policy and Terms of Use.
The information on this Website is not reliable and not intended to provide tax, legal, or investment advice. Nothing contained on the Website shall be considered a recommendation, solicitation, or offer to buy or sell a security to any person in any jurisdiction.
CEO.CA members discuss high-risk penny stocks which can lose their entire value. Only risk what you can afford to lose.
© 2016 - Pacific Website Company Inc.
@newsfile/benchmark-reports-259-gt-gold-and-3320-gt-silver ↻
0 online
Today This week
Search Subscribe
Members of @newsfile/benchmark-reports-259-gt-gold-and-3320-gt-silver

Edmonton, Alberta--(Newsfile Corp. - June 4, 2019) - Benchmark Metals Inc. (TSXV: BNCH) (OTCQB: CYRTF) (WKN: A2JM2X) (the "Company" or "Benchmark") is pleased to provide exploration plans and historical results at the Amethyst Breccia Zone (the "AGB Zone") located in the eastern portion of the regional Lawyers Trend, an area just 2 km from the main resource expansion area of the Lawyers Project that remains under-explored. The AGB Zone is a sub-parallel structure adjacent to the Cliff Creek, Dukes Ridge and Phoenix structures within the Lawyers Trend (see Location Map below) and will be a high-priority target for the 2019 drill program of up to 30,000 metres.

Selected historical high-grade drilling intercepts at the AGB Zone include:

The Lawyers Project is situated in the Stikine Terrane of northern British Columbia, Canada, where magmatic events provided a source for mineralizing porphyry and epithermal systems. These mineralizing events form an arch of gold and polymetallic deposits around the Bowser Basin (that include Brucejack, KSM, Premier, Red Mountain, Bronson, GT Gold, Red Chris, and Kemess), referred to herein as the 'Golden Horseshoe'.

Significant mineralization was intersected by historic drilling outside of the main mined area. The AGB zone remains open in all directions. Recently acquired data, geological compilation and reinterpretation for the AGB zone has revealed significant potential to add gold and silver ounces in unmined areas. This is based upon data incorporated from over 17,000 metres of drilling, 4,500 assays from surface and underground sampling, in addition to more than 600 metres of trench data with more than 600 samples and assays. 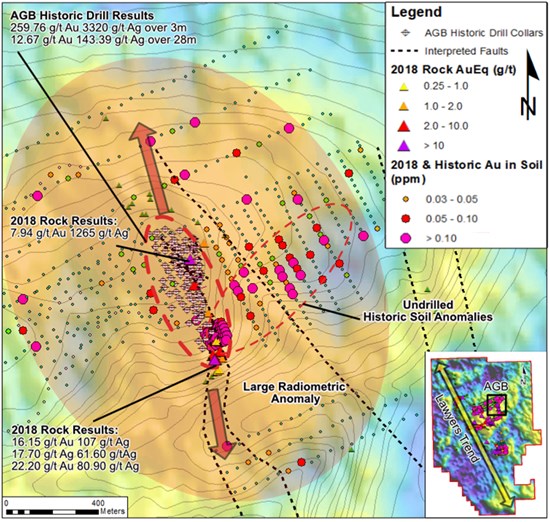 The mineralization is north-northwest striking, steeply west-dipping, and occupies a topographic high. The zone has been traced for more than 500 metres along strike, greater than 225 metres vertically, and is up to 75 metres wide. To the north, 2018 soil samples identified anomalous gold and silver, coincident with reconnaissance mapping that identified chalcedonic quartz veining in outcrop (Kaip and Childe, 2001). In addition, the zone has been traced to the south where several high-grade rock samples, yielding up to 22.20 g/t gold and 80.90 g/t silver, were collected in 2018.

With only limited data available for AGB and the eastern portion of the geophysical anomaly, it was not a focus of the limited 2018 work program. AGB is now a high-priority target for an expanded property-scale work permit in 2019.

Mineralization at AGB is hosted in a prominent quartz breccia zone and has a strong association with chalcedonic quartz veins. Pervasive potassic alteration, similar to that at Cliff Creek and Dukes Ridge, also occurs at AGB, resulting in a large K-radiometric anomaly that is coincident with the known mineralization. The radiometric anomaly continues to the north and to the south of AGB, across the valley toward the Dukes Ridge and Phoenix zones and remains untested. A major NW-SE structure is also an important feature at AGB, with the mineralization situated on the hanging wall of a steep west-dipping fault. These major north-west structures, which reflect the original volcanic basin geometry are common to all the major mineralized zones along the Lawyers Trend.

The technical content of this news release has been reviewed and approved by Michael Dufresne, M.Sc., P.Geol., P.Geo., a qualified person as defined by National Instrument 43-101.

Benchmark is a Canadian mineral exploration company with its common shares listed for trading on the TSX Venture Exchange in Canada, the OTCQB Venture Market in the United States and the Tradegate Exchange in Europe. Benchmark is managed by proven resource sector professionals, who have a track record of advancing exploration projects from grassroots scenarios through to production.

To view the source version of this press release, please visit https://www.newsfilecorp.com/release/45302