Use of this site indicates acceptance of the Privacy Policy and Terms of Use.
The information on this Website is not reliable and not intended to provide tax, legal, or investment advice. Nothing contained on the Website shall be considered a recommendation, solicitation, or offer to buy or sell a security to any person in any jurisdiction.
CEO.CA members discuss high-risk penny stocks which can lose their entire value. Only risk what you can afford to lose.
© 2022 - CEO.CA Technologies Ltd.
@newsfile/blue-star-gold-intercepts-1500-gt-gold-over-1765 ↻
0 online
Today This week
Search Subscribe
Members of @newsfile/blue-star-gold-intercepts-1500-gt-gold-over-1765

Blue Star's CEO, Grant Ewing, commented, "Our 2022 exploration campaign has begun with impressive results returned from DD22-FLO-002, which has the highest value (grams gold x width metres) of all intercepts drilled by Blue Star. The intercepts in FLO-002 are expected to allow the conversion of existing inferred ounces to an indicated category and expand the Flood Zone resource. Our understanding of controls on mineralization has improved significantly over the last several months and this has contributed to better targeting at both the deposit and property scale. Several promising target areas throughout our prospective landholdings will be assessed during the current program."

DD22-FLO-002 intersected 15.00 g/t gold over 17.65 m, and 5.30 g/t gold over 5.70 m, in a sparsely drilled area of the Flood Zone at approximately 100 m vertical depth. Both intercepts are within a structurally disrupted zone between a high Fe-Ti basalt unit and lower Fe-Ti basalt unit immediately adjacent to the sediment fold hinge. Drill hole DD22-FLO-001 tested the width of the Flood Zone in a near surface area where previous drilling ended prematurely. Core lengths of 6.64 m and 2.30 m with acicular arsenopyrite mineralisation were encountered in DD22-FLO-001; assays are pending.

Other Gnu Zone drill holes completed to date include DD22-QIP-001 and DD22-QIP-002 that are evaluating the new polymetallic vein discovery (20.8 g/t Au over 8.15 m) made by Blue Star in 2021. All of these holes are being sampled or have samples at the laboratory and these assays will be released once results are received.

Darren Lindsay, Blue Star's VP Exploration stated: "The team has done an outstanding job from getting the camp running, to successfully completing the regional magnetics program over Roma and Hood River, to delivering these initial spectacular results (FLO-002) in areas of geological uncertainty within the existing Flood Zone deposit. In addition, another polymetallic vein has been discovered while determining the extent of the 2021 vein discovery at the Gnu Zone. On top of these successes the exploration team is also very excited about implementing the detectORE™ system of Portable PPB Pty Ltd in our regional exploration efforts."

Figure 3: Table of results to date.

Figure 4: Table of drill collar locations for holes reported in this release.

To view an enhanced version of this graphic, please visit:
https://images.newsfilecorp.com/files/2421/131317_img.jpg 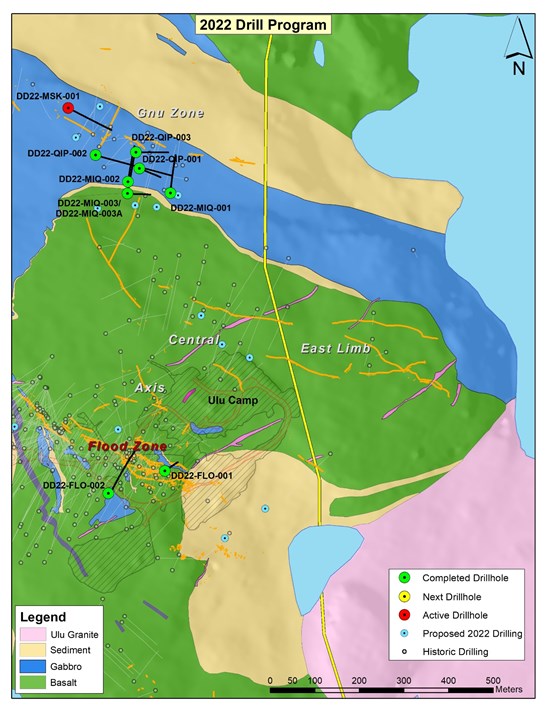 An orientation survey over the known areas of mineralization in the Ulu lease including the Flood Zone and the Gnu Zone have been completed with samples processed by the detectORE™ system for rapid low level gold analysis by portable XRF. Anomalous zones were detected in the areas expected including down-ice of the Flood Zone deposit. Subsequently the regional sampling program on the Roma project has been initiated.

The Company's properties are located approximately 525 km NNE of Yellowknife, NT in the Kitikmeot region of western Nunavut. The hamlet of Kugluktuk is approximately 210 km to the NW. The Roma property lies approximately 30 km north of the Ulu-Hood River property. The total area of Blue Star's projects encompasses 267 km2 of the highly prospective and underexplored High Lake Greenstone Belt.

The Ulu mining lease hosts the advanced stage Flood Zone gold deposit, where a significant high-grade gold resource has been outlined. Several additional gold prospects (including, but not limited to, Zebra, Contact, Central, Axis, and Gnu) are spatially related to the axis of the 5 km long Ulu Fold, which extends from the Ulu lease onto the northern part of the Hood River property and culminates at the North Fold Nose Zone. The recent expansion of the Hood River concession added several new target zones south of the Flood Zone gold deposit. The eastern side of the Hood River property is contiguous to the Ulu lease, and hosts over twenty known gold showings. The Hood River prospects have the same deformation history (including tight folding) as well as similar mineralization styles (acicular arsenopyrite and polymetallic quartz veins) and stratigraphic sequences as the Flood Zone. One of the most prospective target areas on the eastern Hood River property is the 4 km long Crown-Pro trend which has seen only limited drilling.

The Roma project lies in the northern section of the High Lake Greenstone Belt. The project covers high grade gold showings discovered by previous explorers, notably BHP Minerals from 1988 to 1994. Multiple significant gold showings are present within a 6.5 km x 2.4 km area on the historic Roma claim block. The original showing is a 0.30 to 3.0 m wide quartz vein exposed in outcrop and boulders for 2.0 km. In 1991, BHP drilled 10 shallow holes totalling 465 metres to test 1.72 km of strike of the vein. All drill holes intersected quartz veins from 15 m to 37 m vertically below surface. Visible gold was noted in three of the drillholes and the best results were 12.38 g/t Au over 2.31 m (including 64.0 g/t Au over 0.37 m) from DDH MD-01, and 8.69 g/t Au over 1.87 m from MD-03. No drilling was conducted downdip of the high-grade intersection in DDH MD-01 and no step out drilling to the north from this intercept was conducted. No follow up drilling is known to have been completed on this property since BHP's initial drill program in the 1990's. The Company has not verified the historical results from the Roma property and has presented information obtained from two assessment reports submitted by BHP Minerals Canada Ltd.; McMaster, G., (1995). Roma 3,4,5 and 6 Claims 1995 Geological and Geochemical Report, and Anonby, L. and Jopson, W., (1992). Geological, Geochemical, Geophysical and Drilling Report on the Roma 1 and 2 Claims.

The site of the future deep-water port at Gray's Bay is 40 - 100 km to the north of the properties, and the proposed route corridor for the all-weather Gray's Bay road passes in close proximity to the Roma, Ulu, and Hood River projects. 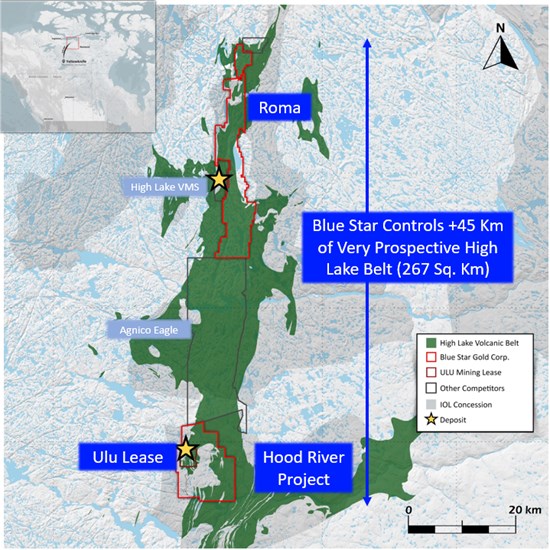 Drill holes reported had core samples cut by core saw with one half of the core retained and the other half sent for analysis. Samples were prepared by ALS Yellowknife-Geochemistry and analyzed at ALS Global, North Vancouver. Gold analysis was by fire assay using ALS code Au-AA26 and multielement analysis by code ME-MS61. Control samples include a crush duplicate every twenty samples; certified reference material was inserted once every ten samples. Reported assay intervals are uncapped, use a minimum 1 g/t gold assay cut off with the inclusion of up to 2 m of material below cut-off. True widths for all but the Flood Zone are not known due to lack of drilling and may range from 50% to 95% of drilled lengths.

DetectORE™ is a new rapid geochemical analysis technique developed by Portable PPB Pty Ltd to be used at exploration sites. Regional geochemical samples (1000m x 50m grid) consisting of till samples collected from frost boils were sieved to <1 mm to capture approximately 2kg of material; samples were dried with a 500 gram split used in the analysis technique which includes final reading of the sample collector devices by pXRF, reject material was also analyzed by pXRF for multi-element review and retained. The QP has ensured the QAQC program of detectORE™ of two reference materials per processing batch (90 samples) and at least two certified collector devices are analyzed during the analysis stage was followed. Additionally, the Company inserted one blank, one duplicate, and one known anomalous sample into the initial processing batches.

Darren Lindsay, P. Geo. and Vice President Exploration for Blue Star, is a Qualified Person under National Instrument 43-101 ("NI 43-101") and has reviewed and approved the technical information contained in this news release.

Neither the TSX Venture Exchange nor its Regulation Services Provider (as that term is defined in the Policies of the TSX-Venture Exchange) accepts responsibility for the adequacy or accuracy of this Release.

This press release contains "forward-looking statements" within the meaning of applicable securities laws. Forward-looking statements can be identified by words such as: "anticipate," "intend," "plan," "goal," "seek," "believe," "project," "estimate," "expect," "strategy," "future," "likely," "may," "should," "will" and similar references to future periods. Examples of forward-looking statements include, among others, statements we make regarding prospective income and revenues, anticipated levels of capital expenditures for fiscal year, expectations of the effect on our financial condition of claims, litigation, environmental costs, contingent liabilities and governmental and regulatory investigations and proceedings, and estimates of mineral resources and reserves on our properties.

Forward-looking statements are neither historical facts nor assurances of future performance. Instead, they are based only on our current beliefs, expectations and assumptions regarding the future of our business, future plans and strategies, projections, anticipated events and trends, the economy and other future conditions. Because forward-looking statements relate to the future, they are subject to inherent uncertainties, risks and changes in circumstances that are difficult to predict and many of which are outside of our control. Our actual results and financial condition may differ materially from those indicated in the forward-looking statements. Therefore, you should not rely on any of these forward-looking statements. Important factors that could cause our actual results and financial condition to differ materially from those indicated in the forward-looking statements include, among others, the following: economic and financial conditions, including volatility in interest and exchange rates, commodity and equity prices and the value of financial assets, strategic actions, including acquisitions and dispositions and our success in integrating acquired businesses into our operations, developments and changes in laws and regulations, including increased regulation of the mining industry through legislative action and revised rules and standards applied by the regulatory bodies in Nunavut, changes in the price of fuel and other key materials and disruptions in supply chains for these materials, closures or slowdowns and changes in labour costs and labour difficulties, including stoppages affecting either our operations or our suppliers' abilities to deliver goods and services to us, as well as natural events such as severe weather, fires, floods and earthquakes or man-made or other disruptions of our equipment, and inaccuracies in estimates of mineral resources and/or reserves on our mineral properties.

To view the source version of this press release, please visit https://www.newsfilecorp.com/release/131317