Use of this site indicates acceptance of the Privacy Policy and Terms of Use.
The information on this Website is not reliable and not intended to provide tax, legal, or investment advice. Nothing contained on the Website shall be considered a recommendation, solicitation, or offer to buy or sell a security to any person in any jurisdiction.
CEO.CA members discuss high-risk penny stocks which can lose their entire value. Only risk what you can afford to lose.
© 2022 - CEO.CA Technologies Ltd.
@newsfile/cabral-gold-identifies-new-area-of-extensive-gold-mineralization ↻
0 online
Today This week
Search Subscribe
Members of @newsfile/cabral-gold-identifies-new-area-of-extensive-gold-mineralization

Highlights are as follows:

Alan Carter, Cabral's President and CEO commented, "These recent trench results are highly significant for three reasons. Firstly, they indicate that the east-trending Machichie Main zone can be traced for at least 350m west of previous drilling, significantly increasing the strike extent, and in particular extending the high-grade zone previously identified in recent trenching. The Machichie Main zone remains open to the west. Secondly, and perhaps more importantly, these results suggest the presence of a large new mineralized body in intrusive rocks comprising a swarm or array of numerous gold-bearing quartz veins and veinlets. Trenching suggests that this new zone is northeast-trending parallel to the general trend of the veins. The array extends over an area of at least 500 x 300m, and includes the previously identified Machichie SW veins. This mineralized area remains open in every direction. Finally, the trenching program suggests a significant amount of oxide material has likely resulted from the weathering of this new mineralized zone which should add to the overall inventory of gold-in-oxide mineralization, which already includes three gold-in-oxide blankets discovered thus far at Cuiú Cuiú".

The Machichie target is located 500m north-west of the MG gold deposit (Figure 1). Previous drilling at the Machichie Main zone identified a persistent mineralized zone which is east-trending and dips steeply to the north. This main zone consists of a high-grade core zone surrounded by a low-grade alteration envelope which is similar in style to the primary bedrock gold deposits at MG and Central, as well as the recently announced PDM basement discovery. 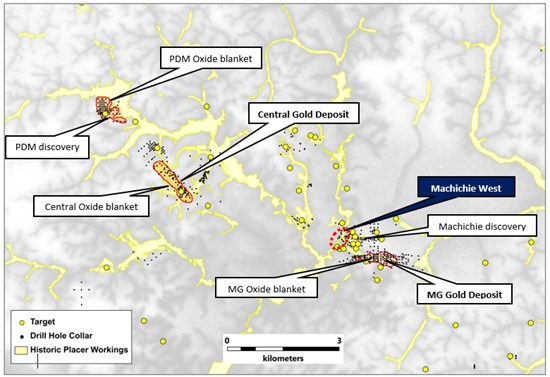 Figure 1: Map showing the location of the Central and MG gold deposits, the recent discoveries at PDM and Machichie, the three oxide blankets and the new Machichie West area. Other key gold targets are shown as yellow circles

The immediately adjacent Machichie SW target comprises an array of narrow steep-dipping, northeast-trending structures that have returned some very high-grade intercepts, which had been recognized to the southwest of the Machichie Main zone. These veins were initially only recognized south of the Machichie main zone, but trenching has now identified multiple parallel and north-east trending mineralized vein structures immediately north of the Machichie Main zone. This suggests the presence of a much more extensive sheeted vein array than previously envisaged covering an area of 300 x 500m and open in three directions.

Table 1 summarizes the results from all eleven recent trenches excavated in the new Machichie West area. The following discusses some of the more significant results and observations.

Trench CT0049 was characterized by numerous veins and veinlets within broad zones of hydrothermal alteration. The trench averaged 96.5m @ 0.6 g/t gold and mineralization remains open across strike to the south.

Several higher-grade zones are evident within this trench (Table 1, Figure 2) and are associated with zones of more intense veining. These returned:

The 7.7m higher-grade intercept is 50m west of the high-grade mineralization that was cut in trench CT0035A which returned 5m @ 8.3 g/t gold. Based on vein orientations and structures evident in both trenches, it is almost certainly the same zone, and is now interpreted to represent the western extension to the east-trending Machichie Main zone. The intercept in CT0049 of 7.7m @ 5.8 g/t gold starts from the beginning of the trench and is open to the south indicting that the higher-grade zone may be wider than the mineralized interval suggests. Furthermore, CT0049 is the westernmost trench excavated to date in the Machichie West zone indicating that both the Machichie Main zone and the Machichie West vein array are open to the west.

Trench CT0045, was excavated 50-100m east of trench CT49. It is oriented in a north-south, and occurs immediately north of CT0035A (Figure 2).This trench was designed to test for the presence of more northeast-trending veins. The trench returned 138m @ 0.5 g/t gold. Several of the more significant intervals of gold mineralization displayed northeast-trending foliations, fractures, and vein structures similar to veins in the Machichie SW area. Higher-grade intervals in Trench CT0045 include:

Three other trenches were excavated along the surface projection of the interpreted western extension of the Machichie Main Zone. Trenches CT0040 and CT0041 returned 0.7m @ 11.3 g/t gold and 1.6m @ 6.6 g/t gold, respectively, and are located approximately 150m east of trench CT0035A. CT0042 was also excavated on the projection of the main Machichie structure immediately east of trench CT0041 and returned 4m @ 1.5 g/t gold with the mineralized intercept being open across strike, and of unknown width.

All of the other trenches excavated on the western side of Machichie are mineralized along their entire length and include; 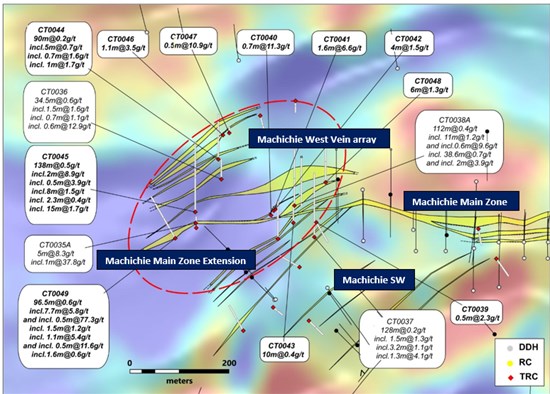 Figure 2: Detailed map showing the E-W trending Machichie Main and the NE-SW trending veins of the Machichie SW target. The Machichie West Vein array comprising an area of 300 x 500m is also shown and is coincident with a magnetic low (blue background). Current and recent trench results are shown, as is the outline of the main mineralized structures identified to date (yellow)

The trenching program immediately west of Machichie was initially designed to test the western extension of the main east-trending Machichie Main zone and has been very successful in that regard, with trench CT0035A returning 5m @ 8.3 g/t gold. That trench is located 300m along strike and due west of the most westerly drill hole. Trench CT0049 was excavated 50m further west and returned 7.7m @ 5.8 g/t gold (open) including 0.5m @ 77.3 g/t gold suggesting that the mineralized zone at Machichie extends at least 900m along strike.

The recent trenching program identified numerous new northeast-trending veins in weathered intrusive rock to north of the Machichie Main zone. The density of these veins and veinlets within the weathered intrusive host rock appears to increase steadily to the west and to the north.

The extensive low-grade values that were encountered in most trenches include zones of higher grade (Table 1). These are comparable with the gold values from the recently identified gold-in-oxide zones at MG, PDM and Central suggesting that the Machichie area could contain a significant amount of additional oxide material in weathered basement. Since this oxide material occurs in structures within weathered and oxidized intrusive rocks, the mineralization is expected to continue below the weathering profile into the hard underlying intrusive rocks, although drilling will be required to confirm.

The size and intensity of the veining noted from the recent trenches at Machichie West suggests that it could be a major new mineralized body.

Results are pending on 12 diamond-drill holes at MG.

Results for 21 RC holes are also pending at PDM.

Results are pending on 14 follow-up diamond-drill holes at Machichie.

Results are also pending on 6 diamond-drill holes at the Indio target and additional drilling is planned.

The preparation of an updated resource estimate for the Cuiú Cuiú project is in progress. The NI 43-101 estimate is being carried out by SLR Consulting (Canada) Ltd. and is expected to be completed during August.

The Company is a junior resource company engaged in the identification, exploration and development of mineral properties, with a primary focus on gold properties located in Brazil. The Company has a 100% interest in the Cuiú Cuiú gold district located in the Tapajós Region, within the state of Pará in northern Brazil. Two gold deposits have so far been defined at Cuiú Cuiú and contain 43-101 compliant Indicated resources of 5.9Mt @ 0.90g/t (200,000 oz) and Inferred resources of 19.5Mt @ 1.24g/t (800,000 oz).

Guillermo Hughes, MAusIMM and FAIG., a consultant to the Company as well as a Qualified Person as defined by National Instrument 43-101, supervised the preparation of the technical information in this news release.

Gold analysis has been conducted by SGS method FAA505 (fire assay of 50g charge), with higher grade samples checked by FAA525. Analytical quality is monitored by certified references and blanks. Until dispatch, samples are stored under the supervision the Company's exploration office. The samples are couriered to the assay laboratory using a commercial contractor. Pulps are returned to the Company and archived. Drill holes results are quoted as down-hole length weighted intersections.

To view the source version of this press release, please visit https://www.newsfilecorp.com/release/132827