Use of this site indicates acceptance of the Privacy Policy and Terms of Use.
The information on this Website is not reliable and not intended to provide tax, legal, or investment advice. Nothing contained on the Website shall be considered a recommendation, solicitation, or offer to buy or sell a security to any person in any jurisdiction.
CEO.CA members discuss high-risk penny stocks which can lose their entire value. Only risk what you can afford to lose.
© 2022 - CEO.CA Technologies Ltd.
@newsfile/canalaska-announces-additional-uranium-intersections ↻
0 online
Today This week
Search Subscribe
Members of @newsfile/canalaska-announces-additional-uranium-intersections

Vancouver, British Columbia--(Newsfile Corp. - September 29, 2022) - CanAlaska Uranium Ltd. (TSXV: CVV) (OTCQX: CVVUF) (FSE: DH7N) ("CanAlaska or the "Company") is pleased to announce successful completion of the $5 million 2022 drilling program at the West McArthur project. The majority of this program was focused on expansion of the newly announced high-grade basement-hosted uranium discovery on the project.

The Company is pleased to report three additional drillholes with elevated radioactivity, highlighted by a 12.4 metre (40.7 feet) intersection that contains multiple metre to sub-metre scale intervals of elevated radioactivity in WMA072-3, the last hole of the program. Geochemical assay results from the summer drill program, outside of the previously reported high-grade intersection of 2.4% U3O8 over 9.0 metres from 906.5 metres in WMA067, are pending. The West McArthur project is operated by CanAlaska, which currently holds a 78.91% ownership in the project. 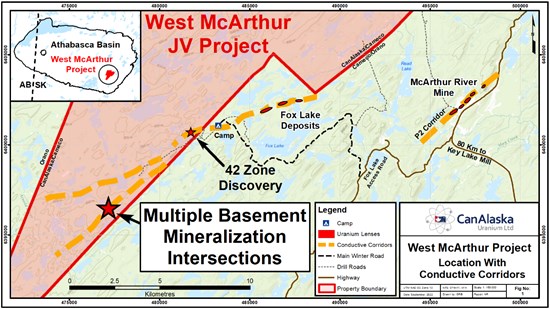 The drilling program consisted of 10,632 metres over 11 completed drill target tests. The initial program was focused on continued expansion of the 42 Zone mineralization and the immediate 1.8 kilometre anomalous trend to the southwest, in addition to regional testing of the newly acquired geophysical data. After the discovery of high-grade basement-hosted uranium mineralization in WMA067, on the second regional test of the drill program (see press release dated July 15th, 2022), the Company focused its efforts on understanding the controls of the mineralization. WMA067 is located 6 kilometres along strike to the southwest of the Company's 42 Zone mineralization on the C10 South conductive corridor. As part of the discovery follow-up, eight drill tests were completed on the same fence or immediately along strike of the WMA067 discovery hole. Elevated radioactivity was intersected in drillholes WMA067-4, WMA070, and WMA072-3 (Figure 2). 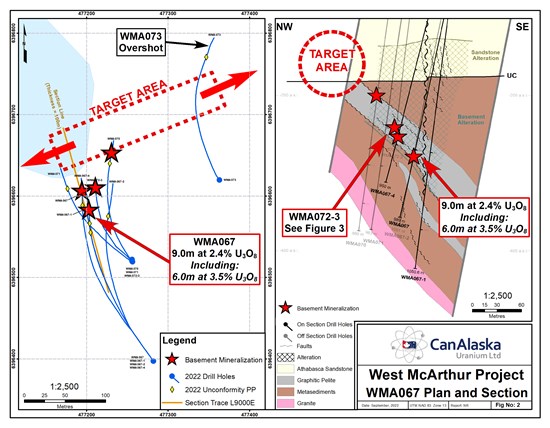 The Company believes that it has successfully identified the orientation of the controlling structure for the basement-hosted uranium mineralization. The ideal target, where this controlling-structure intersects the unconformity, has not been tested and remains a high-priority target for the next drilling program. A preliminary planned budget has been submitted to the Joint Venture for a $10 million 2023 exploration program scheduled to commence in January.

WMA072-3 tested 38 metres up-dip towards the northeast of WMA067 along the graphitic pelite. The basement consists of a wide package of graphitic and non-graphitic pelitic metasediments overprinted by clay and chlorite alteration. Multiple fault zones consisting of clay gouge, broken core, and cataclastic breccias were intersected in the basement of WMA072-3. The drill hole intersected a 12.4 metre long intersection that contains multiple metre to sub-metre scale intervals of elevated radioactivity (> 300 counts per second (cps) on handheld CT007-M scintillometer). The mineralization is highlighted by a 20 cm interval of massive off-scale pitchblende (> 65,500 cps on handheld CT007-M scintillometer). This is followed by multiple intervals of semi-massive, blebby, vein-controlled, and foliation-controlled pitchblende associated with yellow to orange uranium secondaries that range from 10 to 90 cm in length (shown in red on Figure 3). WMA072-3 is interpreted to have intersected the targeted horizon near the controlling structure, slightly to the east of the ideal target. Core recovery throughout the basement intersection is 100%. 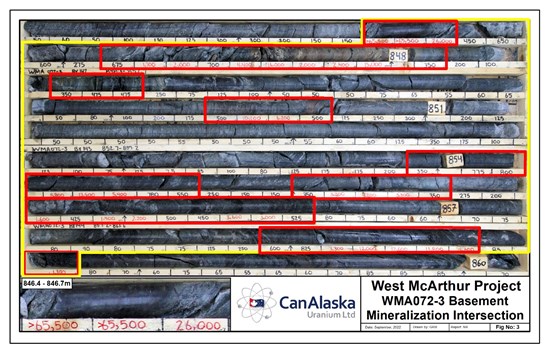 WMA067-4 tested 30 metres up-dip of WMA067. The basement consists of a wide package of graphitic and non-graphitic pelitic metasediments overprinted by clay, chlorite, and hematite alteration associated with fault zones that contain clay gouge, broken core, and cataclastic breccias. The drill hole intersected two zones of elevated radioactivity between 887.4 and 888.3 metres, consisting of one 60 cm and one 10 cm interval (> 300 cps on handheld CT007-M scintillometer). The mineralization is characterized by semi-massive and vein-controlled pitchblende with weak yellow uranium secondaries. WMA067-4 is interpreted to have intersected the targeted horizon to the west of the main mineralized controlling structure. Core recovery throughout the basement intersection is 100%.

WMA070 tested 80 metres up-dip and to the east of WMA067. The basement consists of a wide package of graphitic and non-graphitic pelitic metasediments overprinted by clay, chlorite, and hematite alteration. Multiple graphitic fault zones characterized by cataclasites, clay gouge, and enhanced alteration were intersected throughout the graphitic pelite sequence. The drill hole intersected a 4.5 metre wide zone that contains multiple sub-metre scale intervals of elevated radioactivity (> 300 cps on handheld CT007-M scintillometer). The mineralization is characterized by vein-controlled and disseminated pitchblende with weak yellow uranium secondaries. WMA070 is interpreted to have intersected the targeted horizon to the east of the main mineralized controlling structure. Core recovery throughout the basement intersection is 100%.

Additionally, WMA073 was completed 160 metres along strike to the northeast of the WMA067 fence, targeting the uppermost contact of the interpreted graphitic package that is host to the WMA067 mineralization. WMA073, drilled at an azimuth of 320˚ with an inclination of -80˚, intersected a 40 metre wide structural zone in the medial sandstone column from 573 m that is characterized by strong bleaching, silicification, and limonite alteration associated with steeply-dipping fractures, clay-healed breccias, and isolated sandy-clay gouge. Several intervals of poor recovery, 10 - 50%, were reported within the core of the structural zone between 587 and 605 metres. The basement of WMA073, below the unconformity at 804.5 metres, consisted of footwall metasediments followed by granitic gneiss. Based on the intense faulting and alteration in the lower sandstone, coupled with the footwall stratigraphy, it is interpreted that WMA073 overshot the target at the unconformity by approximately 60 metres. Based on these results, immediate follow up of the sandstone structure back to the ideal target at the unconformity is warranted.

CanAlaska CEO, Cory Belyk, comments, "The style of alteration and mineralization with local zones of very high-grade uranium mineralization is exactly what we would anticipate from the drilling program in this geological setting. The presence of off-scale radiometric results highlights the potential of this system to deposit large amounts of high-grade uranium. With a better understanding of the controlling fault structures now in hand, the CanAlaska team will focus on testing the target area at the unconformity, along strike and within the basement. This is a growing discovery that is truly wide open and we look forward to the next drilling program that is currently planned for early 2023."

All drill core samples from the 2022 summer program have been received by the Saskatchewan Research Council Geoanalytical Laboratories (SRC) in Saskatoon, Saskatchewan. The samples were shipped in secure containment for preparation, processing, and multi-element analysis by ICP-MS and ICP-OES using total (HF:NHO3:HClO4) and partial digestion (HNO3:HCl), boron by fusion, and U3O8 wt% assay by ICP-OES using higher grade standards. Radiometric assay samples are chosen based on downhole probing radiometric equivalent uranium grades and scintillometer (SPP2 or CT007-M) peaks. Assay samples comprise 0.3 - 0.5 metre continuous split-core samples over the mineralized interval. A 0.1% U3O8 cut-off with a maximum internal dilution of 1 metre is used for compositing and reporting the data. The SRC is an ISO/IEC 17025/2005 and Standards Council of Canada certified analytical laboratory. Blanks, standard reference materials, and repeats are inserted into the sample stream at regular intervals by CanAlaska and the SRC in accordance with CanAlaska's quality assurance / quality control (QA/QC) procedures. Geochemical assay data are subject to verification procedures by qualified persons employed by CanAlaska prior to disclosure.

On behalf of the Board of Directors
"Peter Dasler"
Peter Dasler, M.Sc.
President
CanAlaska Uranium Ltd.

To view the source version of this press release, please visit https://www.newsfilecorp.com/release/138799