Use of this site indicates acceptance of the Privacy Policy and Terms of Use.
The information on this Website is not reliable and not intended to provide tax, legal, or investment advice. Nothing contained on the Website shall be considered a recommendation, solicitation, or offer to buy or sell a security to any person in any jurisdiction.
CEO.CA members discuss high-risk penny stocks which can lose their entire value. Only risk what you can afford to lose.
© 2022 - CEO.CA Technologies Ltd.
@newsfile/cassiar-gold-announces-new-pit-constrained-inferred ↻
1 online
Today This week
Search Subscribe
Members of @newsfile/cassiar-gold-announces-new-pit-constrained-inferred

Calgary, Alberta--(Newsfile Corp. - May 10, 2022) - Cassiar Gold Corp. (TSXV: GLDC) (OTCQX: CGLCF) (the "Company") is pleased to announce the results of a new Mineral Resource Estimate ("MRE") at its 100% owned flagship Cassiar Gold Property ("Property") located in northern British Columbia, Canada. The MRE has been prepared in accordance with Canadian Institute of Mining, Metallurgy and Petroleum (CIM) definition standards. A technical report in support of the MRE (the "NI43 101 Report") will be filed on SEDAR within 45 days of this news release. The new pit-constrained MRE for the Taurus deposit and supporting technical report for the Property incorporates results from 16,000 m of diamond drilling and other exploration activities completed in 2020-21 and replaces the Company's previous NI43-101 resource disclosure, which did not provide economic constraints on the reported resource.

"We are delighted to report a new pit-constrained NI43-101-compliant resource estimate at the Taurus deposit which demonstrates a substantial open-pit mineable mineral resource in a highly accessible part of northern BC," stated Marco Roque, President and Chief Executive Officer of Cassiar Gold. "Our 2020-21 drill programs were not inherently designed for resource estimation work so the results of this new resource estimate are extremely robust and form a solid foundation upon which we can build through future exploration and resource drilling. We look forward to closing our public offering in the coming weeks and embarking on our most ambitious exploration program to date to expand the Taurus deposit and explore for new gold discoveries at this district-scale Property."

Due to the time necessary for the Company to complete a new NI43-101 Report at the Taurus Deposit, closing of the previously announced bought deal financing (see the Company's press releases dated March, 2, 3 and 31, 2022) (the "Offering") has been extended and the Company is continuing to work expeditiously towards filing the new 43-101 Technical Report, followed by the final prospectus to close the Offering. Filing of the final prospectus with respect to the Offering remains subject to all necessary regulatory and exchange approvals and the terms and conditions of the underwriting agreement dated March 8, 2022, which has been filed under the Company's profile on SEDAR. The Company will provide further updates concerning the Offering once additional details are confirmed.

The 2022 MRE is based on 462 drillholes totaling approximately 56,500 m completed by the Company and preceding operators. Of the total, 63 holes totaling 15,985 m were drilled by the Company in 2020 and 2021, after the Company took control of the property in 2019. Both drilling programs succeeded in confirming historical drill data; infilled several widely drilled portions of the deposit; and tested extensions and exploration targets though step-out drilling which resulted in the expansion of the deposit footprint.

Based on the geometry of the deposit and the nature of grade distribution, the resource estimation was estimated into 23 "vein" domains and a grade shell (nominally 0.30 g/t Au) domain, intended to best represent the deposit with regards to its geology and a proposed open-pit extraction method. Resource numbers are reported inside pit optimization and are considered to have reasonable prospects for eventual economic extraction by open-pit, bulk mining methods.

Table 1 below displays the inferred resource estimate at a cut-off grade of 0.50 g/t Au along with additional cut-offs to demonstrate the sensitivity of the estimated grades captured by the pit shell at different cut-off grades.

Mineralization at the Taurus deposit remains open laterally in several directions and at depth. Outside of the resource area, areas either lacked bounding drill holes or drilling was too widely spaced to be included in the MRE. Similar styles of mineralization are present in drill holes well beyond the area of the resource, including at the Wings Canyon area, which lies approximately 500 m southeast of the Taurus resource, where previous drilling had intersected broad intervals above resource cut-off grades.

Due to the geometry of the Taurus deposit and the nature of the grade distribution, the resource estimation was constrained using 23 wireframe volumes to represent the "vein" mineralization, and an approximate 0.30 g/t Au grade shell to constrain the alteration halo mineralization. Each domain was estimated using only samples captured within the individual domains ("hard" boundaries). The Grade Shell domain was estimated using "Variable Orientation", utilizing the "vein" domain directions to better represent the change of mineralization trends across the deposit.

Previous mining of the Taurus deposit in the area of the resource was identified and isolated to one area of the resource model in the far east, within the area of the historical Taurus underground mine. Mining shapes for the area were not accurately recreated in 3D and due to this uncertainty the area has been excluded from CIM categorization (Figure 1). In addition, some drilled areas which are above cut-off grade were excluded from the pit shells and resource estimate due to their distance from adjacent holes, or depth, and widely spaced areas of drilling form gaps in parts of the resource where the drill spacing exceeded search parameters. 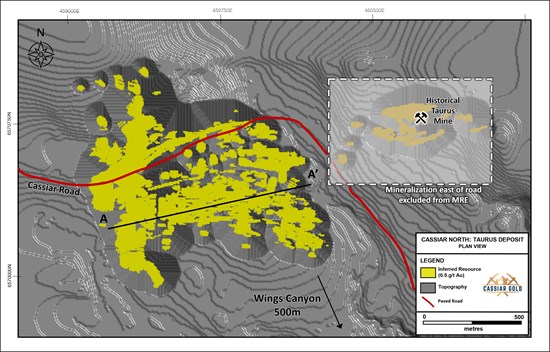 Areas surrounding the historical Taurus deposit highlighted by the transparent rectangle in Figure 1 have been excluded from categorization due to uncertainties in the historical areas of mining and form an area for potential additional future resource expansion. Gaps within the block model, and several mineralized drill holes excluded from the model occur in areas where drilling density is too wide to allow linking of mineralization within the search parameters and provide opportunity for potential expansion through in-fill drilling. 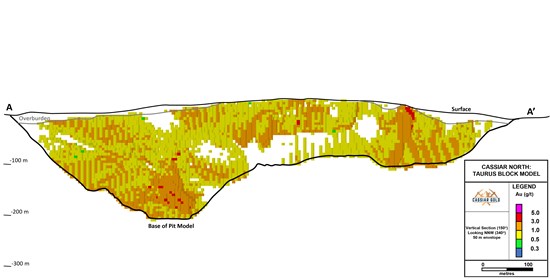 About the Cassiar Gold Property

The Property is located in northern British Columbia, approximately 75 km south of the BC/Yukon border and is located within the traditional territory of the Kaska First Nation. The land package covers approximately 59,000 hectares and comprises 223 mineral claims, 2 placer claims, and 18 crown granted mineral claims.

The property straddles Highway 37 and entirely encompasses the unincorporated settlement of Jade City. Permanent camp facilities for the Property are located on company-owned private land at Jade City and are connected to the local power grid. The Property has good road access via historic mine and exploration roads to most of the prospective gold areas.

The Property hosts both high-grade and low-grade gold mineralization, occurring along a 15 km long trend. The mineralization is hosted within mafic volcanics and is usually associated with regional and property-scale low-angle thrust faults and zones of listwanite.

The Property has been explored since the 1930s. Over 2,500 drill holes (both surface and underground), 38,000 soil samples, hundreds of silt, rock, and trench samples, plus numerous geophysical surveys have been conducted since that time. Since taking control of the Property in 2019, Cassiar has completed diamond drilling programs at the Taurus area in 2020 and 2021, and at the Cassiar South area in 2021, to confirm historical data and to test extension and exploration targets.

Today, the Taurus deposit remains open to significant resource expansion laterally and at depth. In addition, the Property remains largely underexplored and open to new discoveries for both bulk-tonnage style gold mineral resources as well as high-grade orogenic vein systems. The Property has 90 Minfile showings and over 70 individual veins or segments recognized on the Property by filed reports[1].

Cassiar Gold Corp. is a Canadian gold exploration company holding a 100% interest in its flagship Cassiar Gold Property located in British Columbia, Canada. The Cassiar Gold property spans 590 km2 and consists of two main project areas: Cassiar North, which hosts an NI43-101-compliant inferred resource estimate of 1.4Moz at 1.14 g/t Au (cut-off grade of 0.50 g/t) known as the as the Taurus Deposit (National Instrument 43-101 Technical Report on the Cassiar Gold Property, dated April 28, 2022, by S. Zelligan, P.Geo., posted to SEDAR); and Cassiar South which hosts numerous gold showings, historical workings, and exploration prospects. Historical underground mines in the Cassiar South area have yielded over 315,000 oz of Au at grades of between 10 and 20 g/t Au (BC Minfile), underscoring the high potential for further discovery and expansion of high-grade orogenic gold veins.

The Company also holds a 100% interest in the Sheep Creek gold camp located near Salmo, BC. The Sheep Creek gold district ranks as the third largest past-producing orogenic gold district in BC with historical gold production of 742,000 ounces gold at an average grade of 14.7 g/t gold from 1900 to 1951. Minimal exploration work has been conducted since the 1950s.

Cassiar Gold acknowledges, respects, and supports the rights of Traditional First Nations in the lands and communities where we operate.

To view the source version of this press release, please visit https://www.newsfilecorp.com/release/123355