20 Sep 2022, 06:00
@accesswire Cerrado Gold Reports Additional Results From the Infill Program at the Serra Alta Deposit at Its Monte Do Carmo Project in Brazil $CERT $CRDOF

Use of this site indicates acceptance of the Privacy Policy and Terms of Use.
The information on this Website is not reliable and not intended to provide tax, legal, or investment advice. Nothing contained on the Website shall be considered a recommendation, solicitation, or offer to buy or sell a security to any person in any jurisdiction.
CEO.CA members discuss high-risk penny stocks which can lose their entire value. Only risk what you can afford to lose.
© 2022 - CEO.CA Technologies Ltd.
@newsfile/cerrado-gold-achieves-strong-first-quarter-earnings ↻
0 online
Today This week
Search Subscribe
Members of @newsfile/cerrado-gold-achieves-strong-first-quarter-earnings

by @newsfile on 27 May 2022, 06:00
Cerrado Gold Achieves Strong First Quarter Earnings, Cashflow and Low Operating Costs at Its Minera Don Nicolas Mine in Argentina

Toronto, Ontario--(Newsfile Corp. - May 27, 2022) - Cerrado Gold Inc. (TSXV: CERT) (OTCQX: CRDOF) ("Cerrado" or the "Company") is pleased to announce its operational and financial results for the first quarter of 2022 ("Q1 2022"). Q1 2022 represents the second quarter of mine operations post completion of operational restructuring at its Minera Don Nicolas ("MDN") Mine in Argentina. The Company's financial results are reported and available on SEDAR as well as on the Company's website (www.cerradogold.com).

Mark Brennan, CEO and Co-Chairman stated: "We are very pleased with the consistent production the team are delivering at MDN. The strong cashflows we are now generating in Argentina will support our planned expansion to a 90,000 ounce per annum production rate within the next two years. Combined with the development of the Monte do Carmo project in Brazil, Cerrado continues its quest of becoming an intermediate gold producer in the near term." 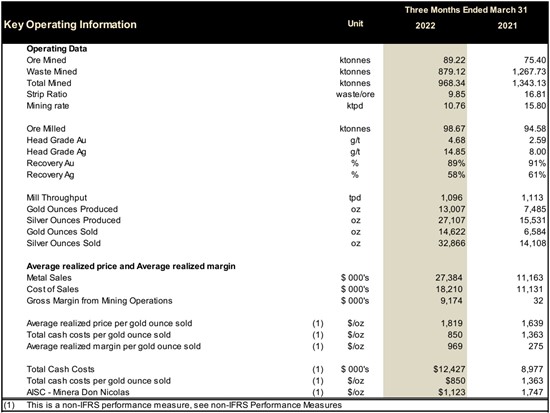 To view an enhanced version of Table 1, please visit:
https://orders.newsfilecorp.com/files/7487/125522_cerradotable1.jpg

To view an enhanced version of Table 2, please visit:
https://orders.newsfilecorp.com/files/7487/125522_cerradotable2.jpg

Net income for the three months ended March 31, 2022, was $3.4 million as compared to a $5.7 million net loss for the three months ended March 31, 2021, an improvement of $9.1 million. The increase in net income is primarily a result of a mine operating margin of $9.2 million (an increase of $9.1 million) a decrease in listing expenses of $1.5 million, a decrease in general and administrative expenses of $0.4 million offset by an increase of transaction costs of $0.6 million and foreign exchange expense of $0.6 million.

The scientific and technical information in this press release has been reviewed and approved by Sergio Gelcich, P.Geo., Vice President, Exploration for Cerrado Gold Inc., who is a Qualified Person as defined in National Instrument 43-101.

Cerrado Gold is a public gold producer and exploration company with gold production derived from its 100% owned Minera Don Nicolás mine in Santa Cruz province, Argentina. It also owns 100% of the assets of Minera Mariana in Santa Cruz province, Argentina. The company is also undertaking exploration and development activities at its 100% owned Monte Do Carmo project located in Tocantins, Brazil. For more information about Cerrado Gold please visit our website at: www.cerradogold.com.

This press release contains statements that constitute "forward-looking information" (collectively, "forward-looking statements") within the meaning of the applicable Canadian securities legislation, all statements, other than statements of historical fact, are forward-looking statements and are based on expectations, estimates and projections as at the date of this news release. Any statement that discusses predictions, expectations, beliefs, plans, projections, objectives, assumptions, future events or performance (often but not always using phrases such as "expects", or "does not expect", "is expected", "anticipates" or "does not anticipate", "plans", "budget", "scheduled", "forecasts", "estimates", "believes" or "intends" or variations of such words and phrases or stating that certain actions, events or results "may" or "could", "would", "might" or "will" be taken to occur or be achieved) are not statements of historical fact and may be forward-looking statements.

To view the source version of this press release, please visit https://www.newsfilecorp.com/release/125522