Use of this site indicates acceptance of the Privacy Policy and Terms of Use.
The information on this Website is not reliable and not intended to provide tax, legal, or investment advice. Nothing contained on the Website shall be considered a recommendation, solicitation, or offer to buy or sell a security to any person in any jurisdiction.
CEO.CA members discuss high-risk penny stocks which can lose their entire value. Only risk what you can afford to lose.
© 2016 - Pacific Website Company Inc.
@newsfile/falcon-completes-summer-2020-drill-program-on-the-historic ↻
0 online
Today This week
Search Subscribe
Members of @newsfile/falcon-completes-summer-2020-drill-program-on-the-historic

Vancouver, British Columbia--(Newsfile Corp. - July 16, 2020) - FALCON GOLD CORP. (TSXV: FG) (FSE: 3FA); ("Falcon" or the "Company") is pleased to announce it has successfully completed its expanded summer drill campaign to test the strike extensions of the historic Central Canada Gold Mine. The 7 holes, totaling 1,055 meters ("m") were drilled for this program with the final two holes totaling 363 m.

Each of the program's 7 core holes successfully intersected the historical mine trend with mineralized quartz veins intersected to a depth of 175 m below surface. The final two holes have confirmed the mineralization along strike for a distance of 200 m west of the reported resource area. Drilling also defined a well-mineralized quartz porphyry unit from the 40 m to 65 m depth. The deepest hole, CC20-07, discovered a previously unidentified mineralized fault zone with extensive quartz veining from 142 m to 177.46 m. Significant chalcopyrite, pyrite, and arsenopyrite were noted by the logging geologist throughout the intersection. The field team has completed logging and samples have been delivered to Activation Laboratories Ltd. ("Actlabs") in Thunder Bay, ON to undergo fire assay gold analysis.

Highlights of the drill intersections for the final two holes are as follows:

Karim Rayani, Falcon's Chief Executive Officer stated, "For an inaugural exploration effort, our 2020 drill program has returned outstanding visual zones of mineralization. The field work by our geological team has been first rate. The discovery of high-grade gold zones both within or associated with the broad halo mineralization may well be the harbinger of a company-making project. The Company is awaiting results of the re-analysis of core samples with visible gold and expanded sample intervals from holes 1 through 3 and will be released as they are made available."

As Falcon reported on June 23rd, 2020, the intersections in its first drill hole, CC20-07, assayed high-grade gold mineralization over a 3 m interval of 10.17 g/t Au at 67 m depth. The Company believes this remarkable result may be confirmation of the reported historical mine resource. This first drill hole also intersected a new mineralized zone untested by previous operators at 104 m depth, which sampled 18.6 g/t Au over 1 m.

Cautionary Statement: Investors are cautioned that the historical information respecting reported resources on the Central Canada Gold Mine Project has been taken from Ontario Ministry of Northern Development and Mines (MNDM) online database and historic mining journals and newspaper articles from the Fort William Daily Times Journal (1930-1934). The Company believes that the historic estimate is relevant to an appraisal of the merits of the property and forms a reliable basis upon which to develop future exploration programs. The Company will need to conduct further exploration which will include drill testing the project, and there is no guarantee that the results obtained will reflect the historical estimate. 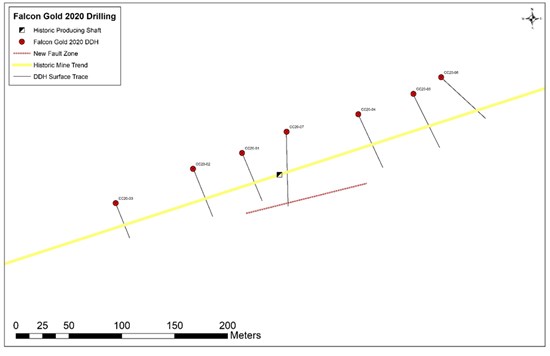 The technical content of this news release has been reviewed and approved by Mr. Alex Pleson, P.Geo., who is a Qualified Person as defined by National Instrument 43-101, Standards of Disclosure for Mineral Projects.

About Falcon Gold Corp. & the Central Canada Gold Mine Project

Falcon is a Canadian mineral exploration company focused on generating, acquiring, and exploring opportunities in the Americas. Falcon's flagship project, the Central Canada Gold Mine, is approximately 20 km south east of Agnico Eagle's Hammond Reef Gold Deposit which has Measured & Indicated estimated resources of 208 million tonnes containing 4.5 million ounces of gold. The Hammond Reef gold property lies on the Hammond fault which is a splay off of the Quetico Fault Zone ("QFZ") and may be the control for the gold deposit. The Central Gold property lies on a similar major splay of the QFZ.

The Company also holds 3 additional projects. The Camping Lake property in Red Lake - Ontario, a 49% interest in the Burton Gold property with Iamgold near Sudbury, and the Spitfire and Sunny Boy Gold Claims near Merritt, B.C.

This news release may contain forward looking statements including but not limited to comments regarding the timing and content of upcoming work programs, geological interpretations, receipt of property titles, etc. Forward looking statements address future events and conditions and therefore, involve inherent risks and uncertainties. Actual results may differ materially from those currently anticipated in such statements.

To view the source version of this press release, please visit https://www.newsfilecorp.com/release/59913