Use of this site indicates acceptance of the Privacy Policy and Terms of Use.
The information on this Website is not reliable and not intended to provide tax, legal, or investment advice. Nothing contained on the Website shall be considered a recommendation, solicitation, or offer to buy or sell a security to any person in any jurisdiction.
CEO.CA members discuss high-risk penny stocks which can lose their entire value. Only risk what you can afford to lose.
© 2016 - Pacific Website Company Inc.
@newsfile/fenixoro-reports-significant-results-from-soil-sampling ↻
0 online
Today This week
Search Subscribe
Members of @newsfile/fenixoro-reports-significant-results-from-soil-sampling

FenixOro VP Exploration Stuart Moller stated: "These preliminary soil results clearly indicate that we are identifying significant new areas of vein/stockwork potential. These results appear to confirm our hypothesis that the veins in the northwest, while faulted off in the center, continue in a significant northwest-southeast trend within the Abriaqui project boundaries. We are extremely encouraged and are aggressively advancing the next steps of the program." The remaining soil grids will cover the majority of the project area where they will test for additional veins as well as replacement and porphyry style gold mineralization.

The prospect area is densely vegetated with minimal rock exposure and the expectation has always been that there was additional mineralization to be found. To this end FenixOro has undertaken a ground magnetics program to further map the porphyry-style alteration and has begun a program of project-wide soil sampling. The magnetics program is complete and the Company is awaiting those results. These first results from the soil program are considered highly promising and positively confirm many aspects of the exploration program model.

The initial grid area in the southeast part of the project has several known veins including some with small scale historical workings. The known vein density, as currently mapped, is significantly lower than that in the main vein zone in the northwestern license. A significant fault offsets the two areas (inset, Figure 1). The intent of the soil study is to identify areas of shallowly buried additional vein sets.

To date over 800 samples have been taken out of a planned project-wide total of 1300. The soil program was begun in the relatively undeveloped southeastern vein area, as the main vein area in the northwestern block is much more developed and better understood. 221 samples were taken on a 25 x 100 meter spacing. Of the 178 results received to date 28% carry over 100 parts per billion gold and are considered to be significantly anomalous. Significant anomalies also exist in copper and silver. Seven samples contain over 1 g/t gold with a maximum value of 41 g/t gold.

This 400m high grade trend is interpreted to represent strike extensions of known veins from the northwestern block and new veins parallel to them. Multi-sample anomalies in the 100-1000 ppb gold range on lines 22, 24, and 28 are unexplained. They most likely represent additional high grade veins and/or lower grade interstitial stockwork type mineralization as seen in the main vein zone. Given the widespread nature of the anomalies it is considered likely that the southeastern area will eventually rival the main vein zone in vein density and economic potential.

To date there are no cases of the Covid-19 virus in the Municipality of Abriaqui and FenixOro crews continue to work normally. The Company continues to anticipate that it will receive the final water use permit that will allow for the commencement of its planned 6000 meter drill program in the very near term. 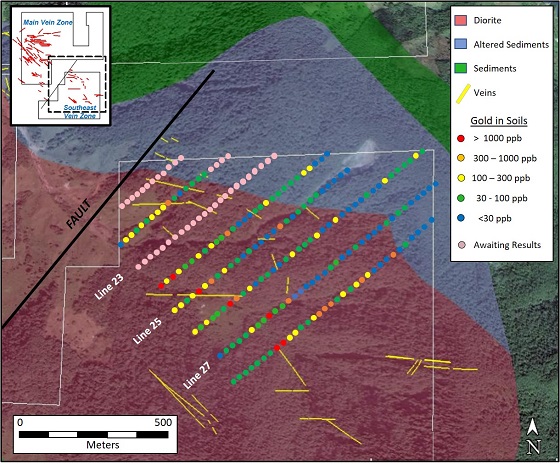 FenixOro Gold Corp is a Canadian company focused on acquiring gold projects with world class exploration potential in the most prolific gold producing regions of Colombia. FenixOro's flagship property, the Abriaqui project, is located 15 km west of Continental Gold's Buritica project in Antioquia State at the northern end of the Mid-Cauca gold belt, a geological trend which has seen multiple large gold discoveries in the past 10 years including Buritica and Anglo Gold's Nuevo Chaquiro and La Colosa. As documented in "NI 43-101 Technical Report on the Abriaqui project Antioquia State, Colombia" (December 5, 2019), the geological characteristics of Abriaqui and Buritica are very similar. The report also documents the high gold grade at Abriaqui with samples taken from 20 of the veins assaying greater than 20 g/t gold. Abriaqui has not yet been drilled but surface and underground geological mapping and sampling as well as a preliminary magnetometry survey have been completed. The property is drill-ready pending finalization of the government permitting process.

Fenix's VP of Exploration, Stuart Moller, led the discovery team at Buritica for Continental Gold in 2007-2011. The Buritica Mine currently contains measured plus indicated resources of 5.32 million ounces of gold (16.02 Mt grading 10.32 g/t) plus a 6.02 million ounce inferred resource (21.87 Mt grading 8.56 g/t) for a total of 11.34 million ounces of gold resources. Buritica is scheduled to commence production in 2020 with annual average production of 250,000 ounces at an all-in sustaining cost of approximately US$600 per ounce. Resources, cost and production data are taken from Continental Gold's "NI 43-101 Buritica Mineral Resource 2019-01, Antioquia, Colombia, 18 March, 2019"). Continental Gold was recently the subject of a takeover by Zijin Mining in an all-cash transaction valued at C$1.4 billion.

The comparison between Abriaqui and the nearby Buritica project is meant only to indicate the similarities between the two in terms of geological setting. FenixOro does not imply that exploration results and/or economic characteristics of a potential future mine at Abriaqui will be similar to those seen at Buritica. The sampling done at Abriaqui is in the form of rock chip and channel samples on surface and in shallow underground workings on vein exposures. The samples were prepared and analyzed at ALS laboratories in Medellin and Lima respectively. Samples were taken, prepared, shipped and analyzed following, industry standard QA/QC protocols and were submitted with certified reference standards.

Stuart A Moller, P. Geol. (British Colombia) Vice President of Exploration of FenixOro and a Qualified Person for the purposes of National Instrument 43-101, has reviewed and approved the technical information contained within this press release. Mr, Moller is a geologist with over 40 years of experience in world-wide mineral exploration including 10 years in Colombia.

To view the source version of this press release, please visit https://www.newsfilecorp.com/release/60350