Use of this site indicates acceptance of the Privacy Policy and Terms of Use.
The information on this Website is not reliable and not intended to provide tax, legal, or investment advice. Nothing contained on the Website shall be considered a recommendation, solicitation, or offer to buy or sell a security to any person in any jurisdiction.
CEO.CA members discuss high-risk penny stocks which can lose their entire value. Only risk what you can afford to lose.
© 2022 - CEO.CA Technologies Ltd.
@newsfile/maiden-mineral-resource-estimate-and-mansa-discovery ↻
0 online
Today This week
Search Subscribe
Members of @newsfile/maiden-mineral-resource-estimate-and-mansa-discovery

The MRE is classified as Inferred Resources and is constrained within optimised pit shells and comprises 15.3 million tonnes grading 1.5 grammes per tonne ("g/t") gold ("Au") for 730,000 ounces of gold.

The Company is also pleased to announce that exploration drilling at the Mansa Prospect, which is located 5km along strike from Makosa, resulted in encouraging drilling intersections including 4 metres ("m") grading 3.11 g/t Au, 5m grading 1.75g/t Au and 2m grading 10.65g/t Au.

The Makosa MRE encompasses the Makosa, Makosa North and Makosa Tail zones, which all remain open along strike and down dip, and are expected to grow with ongoing drilling either along strike or at depth.

The MRE provides a foundation for continued resource growth along strike to the north from Makosa North together with the satellite deposits, including the newly discovered Mansa, that are currently being assessed along the 30 kilometre long Makosa gold corridor.

"The Makosa Maiden Resource Estimate is the Company's first major milestone at the Douta Project. The resource is the culmination of the first round of mostly wide-spaced exploration drilling conducted over a strike length of over seven kilometres. This provides for a solid growth platform for Thor following the greenfield discoveries of Makosa and Makosa Tail in 2018 and 2020 respectively.

"We are now focussing our exploration towards expanding the resource along the prospective corridor that runs along the full 30km length of our exploration licence. Priority will be given to extensional drilling at Makosa North where the mineralisation remains open-ended towards the north-east.

"We are equally excited with the first drilling results from our new greenfield discovery Mansa which is located on the same structure as Makosa. In addition to undertaking definition drilling at Mansa the 5km gap between Makosa North and Mansa will also be targeted in our next drilling program."

Qualified Person
The above information relating to the resource estimate has been prepared by Mr Babacar Diouf (MSc Queens University, Ontario, M.AusIMM, Member Association des Ingenieurs Geologues sortant de I'IST(AGIST), Principal Geologist of Azimuth Consulting Senegal, who is responsible for this Mineral Resource statement and is an "Independent Qualified Person" as defined in NI43-101 and is a qualified person under the AIM Rules and has reviewed and approves the content of this news release.

The information relating to exploration results has been prepared under the supervision of Alfred Gillman (Fellow AusIMM, CP), who is designated as a "qualified person" under National Instrument 43-101 and the AIM Rules and has reviewed and approves the content of this news release. He has also reviewed QA/QC, sampling, analytical and test data underlying the information.

This announcement contains inside information for the purposes of Article 7 of Regulation (EU) 596/2014.

The Douta Gold Project is a gold exploration permit, E02038, which covers an area of 58 square kilometres ("km2") and is located within the Kéniéba inlier, eastern Senegal. The northeast trending permit (Figure 1) has an area of 58 km2. Thor, through its wholly owned subsidiary African Star Resources Incorporated ("African Star"), has a 70% economic interest in partnership with the permit holder International Mining Company SARL ("IMC"). IMC has a 30% free carried interest in its development until the announcement by Thor of a Probable Reserve.

The Douta licence is strategically positioned 4km east of the deposits Massawa North and Massawa Central deposits which form part of the world class Sabadola-Massawa Project that is owned by Endeavour Mining (Figure 1). The Makabingui deposit, belonging to Bassari Resources Ltd, is located immediately to the east of the northern portion of E02038. 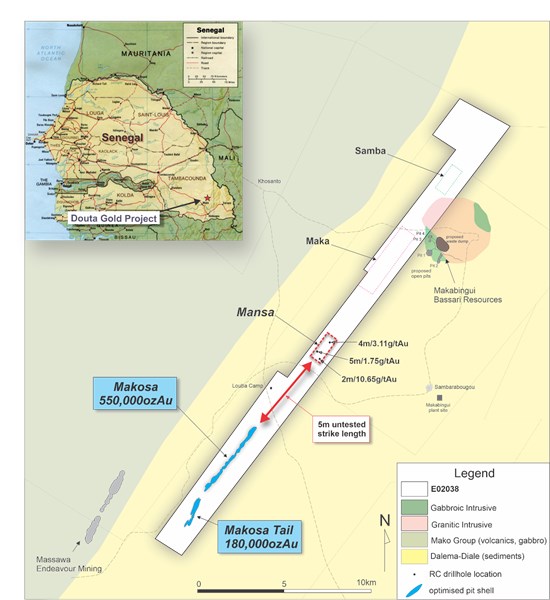 Thor is pleased to declare an initial resource estimate (MRE) of 15 million tonnes ("Mt") grading 1.53g/t Au for 730,000 ounces gold in the Inferred category at the Douta Gold Project in eastern Senegal. The MRE encompasses the Makosa, Makosa North and Makosa Tail zones, which are collectively named the Makosa Resource.

The MRE has been estimated by an independent consultant and is reported at a cut-off grade of 0.3g/t Au within optimised shells using a gold price of US$2,200.

Drilling has been almost exclusively sampled on 1m intervals with the primary laboratory for analysis being ALS Global's laboratory in Bamako, Mali. Split samples ranging in weight from 0.5 kilogrammes ("kg") to 3.5kg, with an average of 2.3kg were collected for analysis. After the sample preparation analysis, a fire assay with an atomic absorption finish on a 50 grammes ("g") subsample of the pulp (AA26), was completed umpire samples were submitted to the MSA laboratory in Abidjan.

Standard QA/QC protocols were followed with inserts of certified standards, blanks and duplicates representing approximately 10% of all analyses.

The Company's database is maintained internally with independent audits carried out by Cube Consulting (Perth) on request.

A weathering model was developed so bulk densities could be assigned according to weathering state.

The tonnage factor in the block models was determined by assigning the bulk densities to the following material types:

Statistical analysis was completed on assay values composited to 1m and extracted from within the mineralised zone domains for the two prospect areas, with a top cut (cap) being selected to reduce the influence of any 'outlier' high grades.

Variography was carried out on each combined domain with the appropriate parameters used to estimate the gold grade using Ordinary Kriging (OK). Due to the difference in orientation between Makosa Tail and Makosa/Makosa North two separate blocks were created to better align blocks with the orientation of the lode systems.

Block estimation used a two-pass strategy with the number of required samples (2 to 20) maintained in each pass, and search distance increased for the second estimation pass.

Kriging statistics (estimated grade, kriging efficiency, conditional bias slope, average distance to samples) were then plotted against the number of informing samples to optimise the outcomes. This was done primarily to avoid local conditional biases (too few samples) and over-smoothing (too many samples) of the estimated grade.

To test the reasonable prospects for eventual economic extraction, the Makosa Mineral Resource is constrained by an optimised pit shell (revenue factor of 1) defined by the parameters shown in Table 3.

A cross-section showing the pit shell in relation to the mineral resource at Makosa Tail is illustrated in Figure 3.

Drill hole density ranges from 50m to 200m spaced sections with spacing between holes on-section typically 30m (refer Figure 2). Notwithstanding the demonstrated geological continuity over a 7km strike length, the classification as 100% Inferred Resources is considered appropriate for the current level of understanding and development of the Mineral Resource. 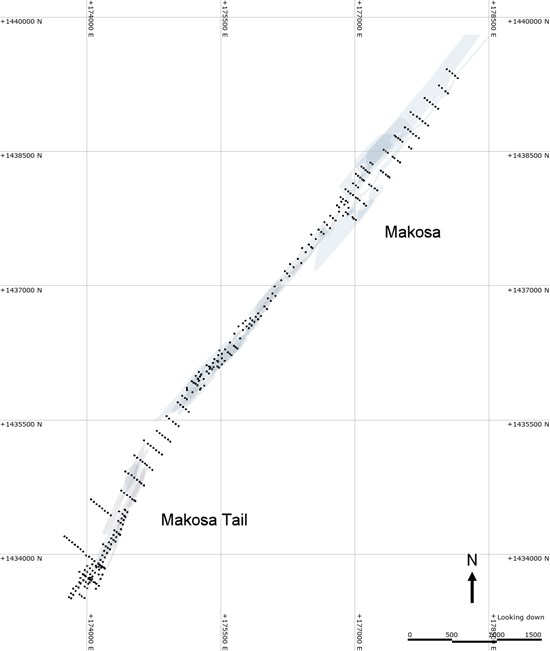 Thor has submitted metallurgical samples to ALS (Perth) and preliminary recovery results indicate that oxide material may be recovered by normal gravity/CIL methods whereas the fresh material is refractory to partially refractory and may be recovered by either Biological Oxidation (BIOX) or Pressure Oxidation (POX) methods. Ongoing metallurgical test work is focussed on achieving the optimal operational flow sheet for the fresh material.

The initial metallurgical results at Makosa are comparable to those reported from initial test work at the Massawa deposit which is located 4km to the west and which is owned by Endeavour Mining. Following exhaustive metallurgical testing the optimal laboratory flow sheet for Massawa achieved recoveries of 88% for fresh (refractory to partially refractory) using a BIOX processing route and 90% for oxide to transitional.

Until a representative number of samples has been fully tested using optimal recovery techniques Thor has adopted similar recovery factors used at Massawa.

This is considered appropriate for the current level of classification and understanding of the Mineral Resource.

No impediments with respect to reserves, parks or other areas of significance have been identified on the project area. The Douta exploration licence consists of a modified environment as a result of human activities including harvesting forest flora and burning vegetation as part of sporadic and unregulated historic artisanal mining activity. There are no settlements within the licence boundary.

Thor abide by the Senegal 2016 Mining Code which introduced an obligation for mining title-holders to contribute annually to a local development fund in the amount of 0.5% of sales, minus annual fees. Under the 2016 Code, mining projects require a prior environmental impact assessment, to be approved by the Directorate of the Environment and Classified Establishments.

To gain initial environmental baseline information within the Douta exploration licence a dry season ecology survey was undertaken in May 2021 by Senegal-based Synergie Afrique - a registered environment consultancy in Senegal. The survey will form part of the overall Environment and Impact Assessment ("EIA") which is expected to be completed in 18 months. It is planned to undertake a wet season ecology survey in the near future when the ephemeral streams are running. 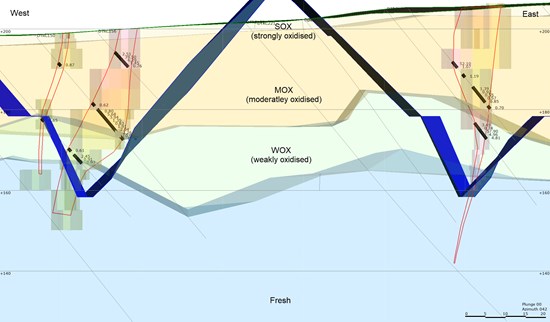 The Mansa Prospect is located 5km along strike to the northeast from Makosa. The exploratory RC drilling programme comprised 31 holes totalling 2,405m and tested anomalous zones as defined by the regional auger geochemical survey completed in 2020. Significant intersections are listed in Table 4 and located in Figure 4. Drill samples were analysed by ALS laboratories in Mali using the AA26 fire assay method (50g charge).

This initial RC programme focussed on the zone from surface to a vertical depth of about 60m, and although this initial drill coverage wide-spaced with drill sections spaced between 200m and 400m apart, the results have confirmed primary gold mineralisation associated with two parallel zones suggested by the geochemical data.

The geological setting of Mansa is similar to that of Makosa with mineralisation hosted by deformed sedimentary rocks near the contact with gabbro or volcaniclastics. Gold mineralisation appears to be controlled by the northeast trending brittle-ductile shear zones that dips steeply towards the northwest. Grade and thickness variations occur along with the shear zone. 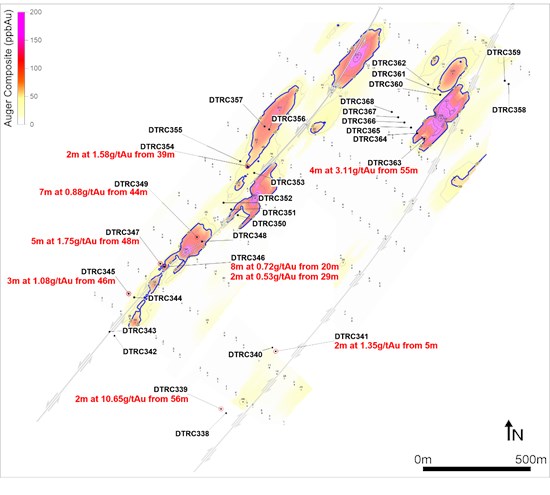 The initial exploration results from Mansa indicate the occurrence of gold mineralisation over a wide area measuring approximately 800m wide and 2,000m along strike.

The best results, including 4m grading 3.11g/t Au from 55m, were returned from drillhole DTRC363 which is located on the eastern shear zone in the northern portion completed of the drilling coverage. There is very little drilling over the eastern shear zone which appears to have been intersected in hole DTRC339, located 2km to the southwest from DTRC363 and intersected 2m at 10.65g/t Au from 56m.

Thor intends to progress the Makosa Resource expansion drilling together with parallel workstreams including detailed metallurgical sampling and testing, environmental and social baseline monitoring as part of an Environmental and Social Impact Assessment, geotechnical and hydrological studies.

The main resource expansion priorities are:

The broad Project-level objectives are:

This press release does not constitute an offer to purchase securities. The securities to be offered in the offering have not been and will not be registered under the United States Securities Act of 1933, as amended, or any state securities laws and may not be offered or sold in the United States or to, or for the benefit or account of, a U.S. person, except pursuant to an available exemption from such registration requirements.

NOT FOR DISSEMINATION IN THE UNITED STATES OR FOR
DISTRIBUTION TO U.S. WIRE SERVICES

To view the source version of this press release, please visit https://www.newsfilecorp.com/release/104023