Use of this site indicates acceptance of the Privacy Policy and Terms of Use.
The information on this Website is not reliable and not intended to provide tax, legal, or investment advice. Nothing contained on the Website shall be considered a recommendation, solicitation, or offer to buy or sell a security to any person in any jurisdiction.
CEO.CA members discuss high-risk penny stocks which can lose their entire value. Only risk what you can afford to lose.
© 2016 - Pacific Website Company Inc.
@newsfile/megumagold-and-osprey-gold-to-combine-creating-a-leading ↻
0 online
Today This week
Search Subscribe
Members of @newsfile/megumagold-and-osprey-gold-to-combine-creating-a-leading

by @newsfile on 23 Mar 2020, 21:27
MegumaGold and Osprey Gold to Combine, Creating a Leading Precious Metals Exploration Company in Nova Scotia

Halifax, Nova Scotia and Vancouver, British Columbia--(Newsfile Corp. - March 23, 2020) - MegumaGold Corp. (CSE: NSAU) (OTCQB: NSAUF) (FSE: 2CM2) ("MegumaGold") and Osprey Gold Development Ltd. (TSXV: OS) ("Osprey") are pleased to announce that they have entered into a letter agreement (the "Agreement") pursuant to which MegumaGold would acquire 100% of the issued and outstanding shares of Osprey via a business combination (the "Transaction").

The proposed Transaction would provide shareholders of both companies with:

MegumaGold and Osprey have both centered their exploration focus on the developing Meguma Formation of Nova Scotia. MegumaGold has assembled a strategically positioned, district-scale claim tenure position comprised of 107,114 hectares within the Meguma Gold District. MegumaGold's current focus is preparing drilling campaigns for its Killag and Touquoy West Properties while continuing to develop its regional targets throughout the district. At Touquoy West, located 4 km to the west of St Barbara's Touquoy mine, combined soil geochemistry results and Induced Polarization (IP) survey results have identified three main anomalies on strike with the Touquoy mine that have never been drill tested. At Killag, MegumaGold's initial Reverse Circulation (RC) drilling program has identified anomalous gold results over a strike length of 1 km open to the east and west, approximately 20 km to the east of St Barbara's Touquoy mine. MegumaGold currently holds 7,176 hectares of exploration licences adjacent to Osprey's Goldenville Project. Osprey's Mitchell Lake Zone, located approximately 3.5 km west of the Goldenville deposit, has been identified by Osprey as a high priority area for additional exploration work and follow-up drilling due to the lack of historical drilling in this area that leaves large areas of untested potential.

Management of both companies believe that the combination of Osprey's Goldenville and Caribou projects, with MegumaGold's developing gold projects and district-scale exploration potential will create a combined entity that will be the leader in advanced exploration and regional development of the Meguma gold district.

Theo Van der Linde, President of MegumaGold stated, "We believe this consolidation of assets is the logical step in building a company optimally positioned to capitalize on the upside of the developing gold camp in Nova Scotia. Combining Osprey's assets of Goldenville and Caribou with MegumaGold's developmental projects contained within its under explored 107,000 ha land position presents a compelling opportunity for our shareholders. The combination of MegumaGold's commanding land position in the Belt and Osprey's deposits creates a combined entity that through a continued corporate and exploration activity, would represent a go-to critical mass Canadian gold and exploration opportunity in the Meguma Gold District, adjacent to Atlantic Gold's operations which was acquired by St Barbara Ltd for $722 million cash consideration in July 2019."

Osprey Gold President, Cooper Quinn commented, "Our board of directors believes the proposed combination of Osprey and MegumaGold creates an attractive opportunity in Nova Scotia for Osprey shareholders by forging an entity of real scale, utilizing Osprey's historically producing, resource-stage projects with the significant exploration ground held by MegumaGold, and management teams with complementary skill sets. Our vision is to build the leading explorer in Nova Scotia, developing a resource base through exploration on deposits across the Meguma terrane where geology, access, and infrastructure align and we believe that the combined entity and its personnel will be positioned to raise and deploy the capital to do just that." 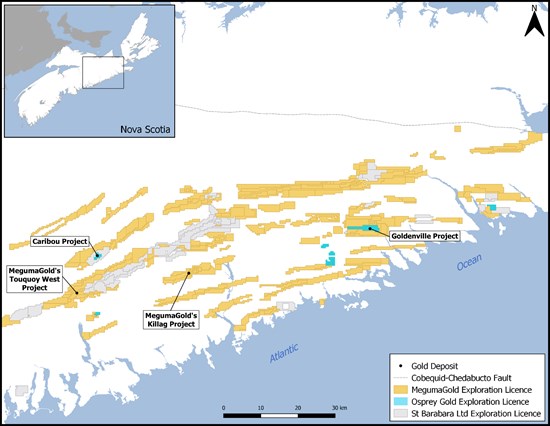 Details of the Proposed Transaction
MegumaGold will acquire all of the issued and outstanding shares of Osprey. Each shareholder of Osprey will receive such number of common shares of MegumaGold (the "Meguma Shares") as is equal to the product of the number of Osprey Shares held by such shareholder at an exchange ratio which equals one (1) Meguma Share per two (2) Osprey Shares outstanding at the closing of the Transaction.

The definitive agreement will provide that unexercised Osprey options and share purchase warrants will be assumed by MegumaGold and will: (i) remain outstanding for their full term, and (ii) following the closing date of the Transaction, entitle the holder thereof to acquire MegumaGold Shares in lieu of Osprey Shares, in such number and at such exercise price as shall be adjusted based on the exchange ratio inherent in the Transaction, and otherwise on the same terms and conditions as existed prior to the Transaction.

MegumaGold currently has 102,780,640 outstanding shares and 31,364,506 shares reserved for issuance under incentive stock options and warrants. As of today's date, without inclusion of including any of MegumaGold's current shareholdings in Osprey, it is anticipated an aggregate of 36,671,166 common shares of MegumaGold are anticipated to be issued to Osprey shareholders, along with incentive stock options and warrants entitling Osprey shareholders to acquire a further 13,921,068 common shares of MegumaGold.

The Transaction is subject to a number of conditions, including due diligence by each party, completion of definitive documentation, approval by Boards of Directors of each party, obtaining any necessary shareholder approvals (including any minority approval required by Multilateral Instrument 61-101, if applicable, obtaining all governmental, regulatory, TSX Venture Exchange ("TSXV"), Canadian Securities Exchange (the "CSE"), and other third-party approvals which are necessary in order to allow the parties to complete the Transaction. The precise form of the Transaction will be determined following further advice and consultation with the parties' respective legal and tax advisors. The Transaction cannot close until all of these conditions are met. There can be no assurance that the Transaction will be completed as proposed, or at all.

Qualified Person Statement
This press release has been reviewed and approved by Regan Isenor, Chief Executive Officer of MegumaGold Corp.; Paul Ténière, M.Sc., P.Geo. of Mercator Geological Services Ltd. and Perry MacKinnon, P.Geo., Vice President of Exploration of Osprey, both "Qualified Persons" as defined under NI 43-101, have prepared and approved the scientific and technical information disclosed in this press release.

Upon closing the Transaction, the resulting issuer is expected to be listed for trading on the CSE.

Forward-Looking Statements and Cautionary Language
All statements in this presentation, other than statements of historical fact, are "forward-looking information" with respect to MegumaGold and Osprey within the meaning of applicable securities laws including, without limitation economic estimates and any statements related to the proposed transaction, proposed board and management changes and shareholder and exchange approvals. MegumaGold and Osprey provide forward-looking statements for the purpose of conveying information about current expectations and plans relating to the future and readers are cautioned that such statements may not be appropriate for other purposes. By its nature, this information is subject to inherent risks and uncertainties that may be general or specific and which give rise to the possibility that expectations, forecasts, predictions, projections or conclusions will not prove to be accurate, that assumptions may not be correct and that objectives, strategic goals and priorities will not be achieved. These risks and uncertainties include but are not limited to exploration findings, results and recommendations, results of due diligence investigations, ability to raise adequate financing, shareholder and exchange approvals in respect of the transaction and unprecedented market and economic risks associated with current unprecedented market and economic circumstances, as well as those risks and uncertainties identified and reported in MegumaGold's and Osprey's public filings under its respective SEDAR profile at www.sedar.com. Although MegumaGold and Osprey have attempted to identify important factors that could cause actual actions, events or results to differ materially from those described in forward-looking information, there may be other factors that cause actions, events or results not to be as anticipated, estimated or intended. There can be no assurance that such information will prove to be accurate as actual results and future events could differ materially from those anticipated in such statements. MegumaGold and Osprey disclaim any intention or obligation to update or revise any forward-looking information, whether as a result of new information, future events or otherwise unless required by law.

Neither the CSE nor TSXV has approved or disapproved the contents of this news release or passed upon the merits of any of the transactions described herein, including the Transaction.

Neither the CSE, TSXV nor their Regulation Services Providers (as that term is defined in the policies of the TSXV) accepts responsibility for the adequacy or accuracy of this release.

To view the source version of this press release, please visit https://www.newsfilecorp.com/release/53703