Use of this site indicates acceptance of the Privacy Policy and Terms of Use.
The information on this Website is not reliable and not intended to provide tax, legal, or investment advice. Nothing contained on the Website shall be considered a recommendation, solicitation, or offer to buy or sell a security to any person in any jurisdiction.
CEO.CA members discuss high-risk penny stocks which can lose their entire value. Only risk what you can afford to lose.
© 2016 - Pacific Website Company Inc.
@newsfile/minera-alamos-continues-to-expand-mineralization-at ↻
0 online
Today This week
Search Subscribe
Members of @newsfile/minera-alamos-continues-to-expand-mineralization-at

Toronto, Ontario and Vancouver, British Columbia--(Newsfile Corp. - June 10, 2020) - Minera Alamos Inc. (TSXV: MAI) (the "Company" or "Minera Alamos") is pleased to report additional drill results from its Phase 2 drill program at the Santana gold project in Sonora, Mexico. Phase 2 was completed over the past year and was initiated as a follow-up to the Company's first drill program at Santana during the 2018/19 period. These new holes were designed primarily to test the northern limits of the Nicho main zone and to continue to evaluate the potential for further extensions of the known mineralization to the south and southwest. The successful results from the program, which are highlighted in Table 1 below, further expands mineralization to the southwest and confirms the depth potential previously identified in hole S20-134 (see news release of April 30, 2020).

The Company has also finalized initial plans for the Phase 3 drill program which will commence shortly following the resumption of post-covid mining activities in Mexico. Current plans call for an additional 20-25 holes at Nicho totaling approximately 4000m as well as the Company's first drill holes at the Zata and Gold Ridge targets in addition to the recently identified Bufita target. Drill testing on the new targets will include initial "scout" drill holes designed to understand the 3D geometry of the outcropping geology and associated geochemical anomalies, followed by more extensive definition drilling as warranted. In addition, the Company has further holes planned for the Divisadero target to gain a better understanding of the geometry, limits and the internal characteristics of this gold bearing intrusive centre. In total, the Phase 3 drill plans amount to approximately 6,000-7,500 m of drilling to be conducted over the second half of the year. The program could be expanded depending on the success of the initial holes on the new targets.

"The Phase 2 drill program at Santana has been extremely successful in demonstrating that the initial Nicho Main Zone breccia pipe has significant potential for expansion. We have now extended the lateral extents of the mineralized zone by almost 150m from what was identified previously and to overall vertical depths beyond 200m. The mineralization appears to remain open in multiple directions as well as at depth. The drilling planned for Phase 3 will focus on continuing to define the system's margins as the Company finalizes its pit optimization studies," stated Darren Koningen, CEO. "We are also excited to commence the drill testing of numerous new targets that have been identified within the Santana project boundaries over the last 18 months. During that period, our geological team has been able to put together a much more complete understanding and appreciation for the larger mineralizing events responsible for the emplacement of this cluster of gold-bearing breccia pipes. Should even a few of these new targets exhibit the potential we have now seen at Nicho it will be a transformative event for the Santana project and its future growth potential." 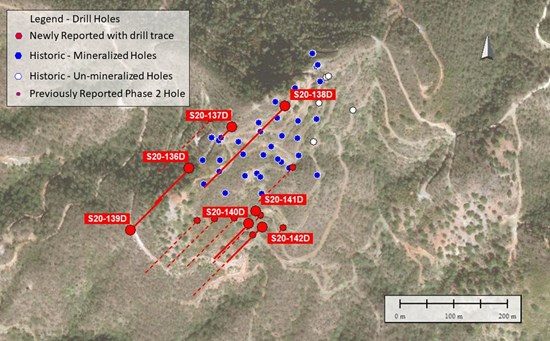 Hole S20-135D was drilled at the Divisadero area (not shown) and was planned to provide further geological information regarding the contact zones (structure, dip, etc.) between the porphyritic intrusive body, the andesites to the west and the quartz monzonites to the east. The drill hole encountered continuous mineralization in the intrusive zone between the two contacts averaging 0.31 g/t gold from 20.0m to 125.60m. The Company is preparing an access road at Divisadero which will allow for further investigation of the potential of the Divisadero zone and its real extension at depth and to the north. This work will be part of the Phase 3 exploration program.

Holes S20-136D to S20-138D were collared within the Nicho zone mineralization and intended to better delineate the northern limits of the deposit and the continuity in this area to the east and west. All three holes returned zones of mineralization with hole S20-137D showing good continuity from 70.0m to 160.0m (90.0m of 0.40 g/t gold). This intersection will be followed up in the coming drill program.

Hole S20-139D drilled downhill of the Nicho Main Zone topographic ridge to test the deeper geological structures drilled in previous holes. The hole was located approximately 100m southwest of any previous drilling and returned 42.5m of 0.36 g/t gold. The encouraging results appear to show western continuity of mineralization beyond what was previously expected based on surface outcropping in the area. Additional step out holes to the west are planned. 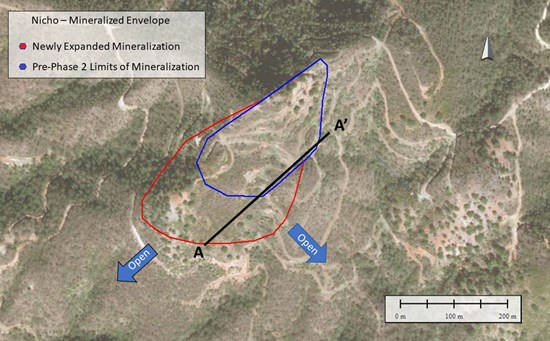 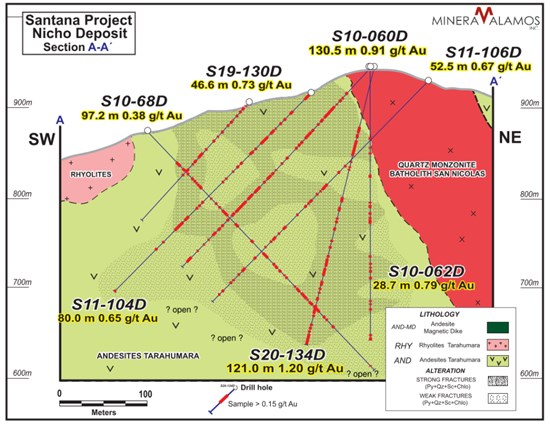 Note: Grade/width of composite intervals is a total of all mineralized intervals that have gold grades equal to or in excess of "typical" open-pit mining heap leach cut-off grades of 0.15 g/t gold.

The Company has finalized its next phase of drilling to include the initial testing of a number of newly identified targets on the Santana property (see Figure 3). The current priority target areas have been initially defined according to three regions - Nicho, Gold Ridge (includes Bufita) and Zata. Additional targets have also been identified and will be added to the drill testing program following the completion of supplementary ground follow-up activities. All of the targets appear to be "Nicho-like" in basic structure and have yielded similar surface sampling results as seen above and around the Nicho area. The Company looks forward to testing these new gold-bearing breccia pipes and zones and determining their significance to the currently under-construction Santana gold operation. For additional information on Zata and Gold Ridge targets please see the news releases dated October 1st, 2018 and September 5, 2019 respectively. 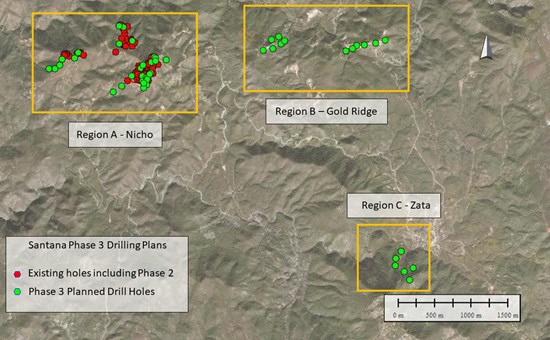 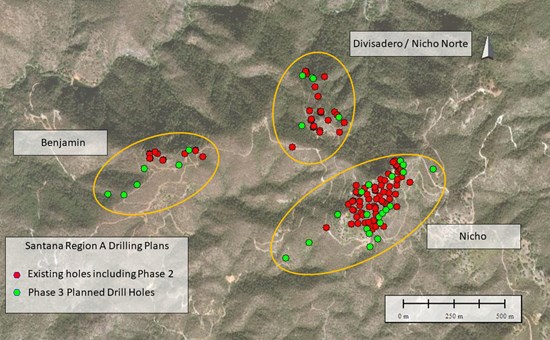 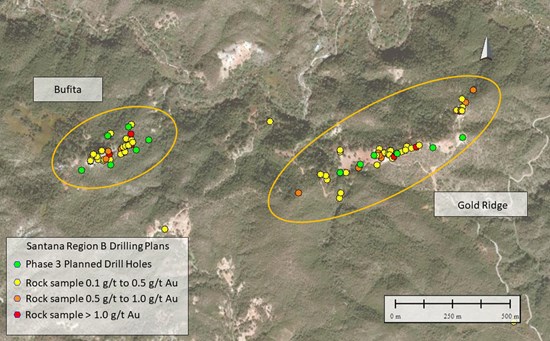 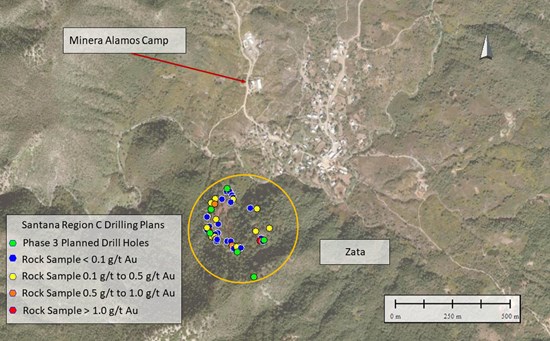 All diamond drill samples were collected by Minera Alamos personnel including the Company's exploration geologists. Drill core samples were cut in half and divided into typically 1-2m intervals. One half of the sample was bagged for analysis and the remaining half was logged by Minera Alamos personnel and stored for future reference. Blanks, duplicates, and standards were randomly inserted with the samples sent for analysis as part of the normal QA/QC procedures.

All samples were prepared and analyzed for gold using fire assaying with AA/gravimetric finish in addition to a standard 35-element ICP suite. All samples were sent for sample preparation at the ALS-Chemex facility in Hermosillo, Mexico.

Mr. Darren Koningen, P. Eng., Minera Alamos' CEO, is the Qualified Person responsible for the technical content of this press release under National Instrument 43-101. Mr. Koningen has supervised the preparation of, and has approved the scientific and technical disclosures in, this news release.

Minera Alamos is a gold development company poised to join the ranks of gold producers in 2021. The Company has a portfolio of high-quality Mexican assets, including the 100%-owned Santana open-pit, heap-leach development project in Sonora that is currently under construction, and which is expected to have its first gold production in late 2020 or early 2021. The La Fortuna open pit gold project in Durango (100%-owned) has an extremely robust and positive preliminary economic assessment (PEA) completed and is nearing the end of the permitting process. A construction decision on La Fortuna could be made in late 2020 or early 2021 and highlights the organic growth the existing projects can provide to the overall production profile. Minera Alamos is built around its operating team that together brought 3 mines into production over the last 12 years.

The Company's strategy is to develop low capex assets while expanding the project resources and pursue complementary strategic acquisitions.

To view the source version of this press release, please visit https://www.newsfilecorp.com/release/57583