Use of this site indicates acceptance of the Privacy Policy and Terms of Use.
The information on this Website is not reliable and not intended to provide tax, legal, or investment advice. Nothing contained on the Website shall be considered a recommendation, solicitation, or offer to buy or sell a security to any person in any jurisdiction.
CEO.CA members discuss high-risk penny stocks which can lose their entire value. Only risk what you can afford to lose.
© 2016 - Pacific Website Company Inc.
@newsfile/minera-alamos-drilling-provides-further-confirmation ↻
0 online
Today This week
Search Subscribe
Members of @newsfile/minera-alamos-drilling-provides-further-confirmation

Toronto, Ontario and Vancouver, British Columbia--(Newsfile Corp. - February 6, 2020) - Minera Alamos Inc. (TSXV: MAI) ("Minera" or the "Company") is pleased to announce the results from the first drill holes of its ongoing Phase 2 drill program at the Santana gold project. The Phase 2 program has a number of different goals that include further testing of the Divisadero discovery from 2018; better definition of the outer limits of the proposed Nicho and Nicho Norte open pits as well as extensions of mineralization at depth; water well drilling; and ultimately drill testing a number of new mineralized structures believed to be Nicho-style pipes that were defined during 2019.

In addition to the Divisadero holes and water drill holes discussed in this release, drilling results from the Nicho area will be released in the coming weeks upon complete receipt and evaluation of assays by the Company. Phase 2 drilling continues with the expectation of approximately 2,500m to 3,000m of drilling each quarter in 2020.

The Divisadero discovery was made near the end of the 2018 Phase 1 drilling with a single hole into the new target. Sitting at a lower elevation than the Nicho Norte and Nicho breccia pipes, the mineralization at Divisadero is hosted by porphyritic intrusive rock, associated with sericite-silica-pyrite alteration, a style of mineralization that could be representative of what the Company expects to drill beneath the previously identified Nicho breccia pipes. Encouragingly, it has exhibited disseminated gold grades that were comparable to the nearby Nicho-style breccias.

Two follow-up holes -- S19-125 and S19-126 -- were completed using available but limited access roads to confirm the previous discovery. The holes were drilled to a maximum depth of 200m from collars located south of the exposed outcropping limits. All 3 holes now drilled into Divisadero have confirmed the presence of wide intervals of disseminated gold-silver mineralization. New access roads are planned for construction to allow testing of the core of the currently mapped and sampled limits of an exposed target that appears to extend significantly to the north and east.

"The Santana property mineralization is hosted within a series of well-defined breccia pipes, only two of which have been drill tested in any significant manner. In 2018, the Company drilled one of these previously untested targets near the currently planned starter operations resulting in a significant new discovery, called Divisadero. This new discovery provided Minera Alamos with increased confidence that the overall project area may contain multiple Nicho-style mineralization centres that are easily accessible from surface," stated Darren Koningen, CEO of Minera Alamos. "While we work on cutting new road access that will allow us to better explore the actual limits of this partially outcropping new target area, we took advantage of the opportunity to drill two additional holes to confirm local continuity of the mineralization identified in 2018. As a result, we have now confirmed the presence of Nicho-style gold values over considerable thicknesses in an area that appears to remain open in multiple directions. These broad intervals of good heap leach grade mineralization underscore the exploration potential of the Santana property and the definition of other areas of mineralization should allow us to significantly expand the overall production profile for the property."

A review of the data from the recent drill holes appears to show that the overall mineralized intersections were impacted by modest intervals of discrete dilution created from a small number of unmineralized andesite dykes or xenoliths of andesite contained within the mineralized intrusive body. Should the minor amounts of barren andesitic material be excluded from the complete drill intersections (as would occur during potential mining operations) then the residual grade would be notably higher. The overall grades in the first three drill holes into the Divisadero zone are comparable to that expected for the initial mining operations at the nearby Nicho and Nicho Norte zones. In total, these three adjacent mineralized systems now span a considerable strike length in excess of 1km and remain open both laterally and at depth. The Company is currently planning the details for additional drill holes at Divisadero to better define its grade and tonnage potential. 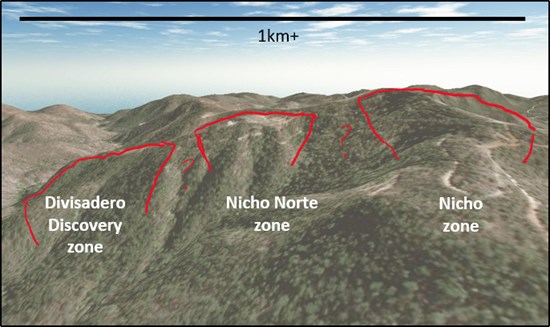 During the second half of 2019, the Company completed a technical study to evaluate the main hydrological systems present throughout the Santana project area. Work included a comprehensive program of field mapping and geophysical surveys aimed at identifying structural controls to the local groundwater flows. A total of five priority locations were identified for further evaluation via reverse circulation (RC) drilling. In total, the water exploration drill program initiated in December 2019 completed a total of 800m of exploratory drilling (all holes combined).

Water was discovered in all the target areas and two of the areas were selected for follow-up due to their potential for higher water volumes deemed suitable for the Santana mining operations start-up plans as well as capacity for future expansion as the project production growth profile is increased. Water Drill Holes (WDH) 3 and 4 were completed to a depth of 150m and 240m respectively and air-lift tests were performed to confirm the presence of continuous groundwater inflows. The steady-state groundwater table in WDH3 was located at approximately 6m from ground level, while WDH4 encountered artisanal water that was discharged naturally from the collar location. Hole WDH4 has been prioritized as having the greatest potential to provide water volumes sufficient to allow for future expansions of operations.

The Company is currently working to expand the diameter of drill hole WDH4 to 10 inches in diameter to facilitate the insertion of a permanent well casing. Following the completion of this work a full-scale pumping test will be completed to verify the continuous water inflow capacity and the ultimate water drawdown elevation. These details will then be utilized to design/construct the final pumping system for the project. 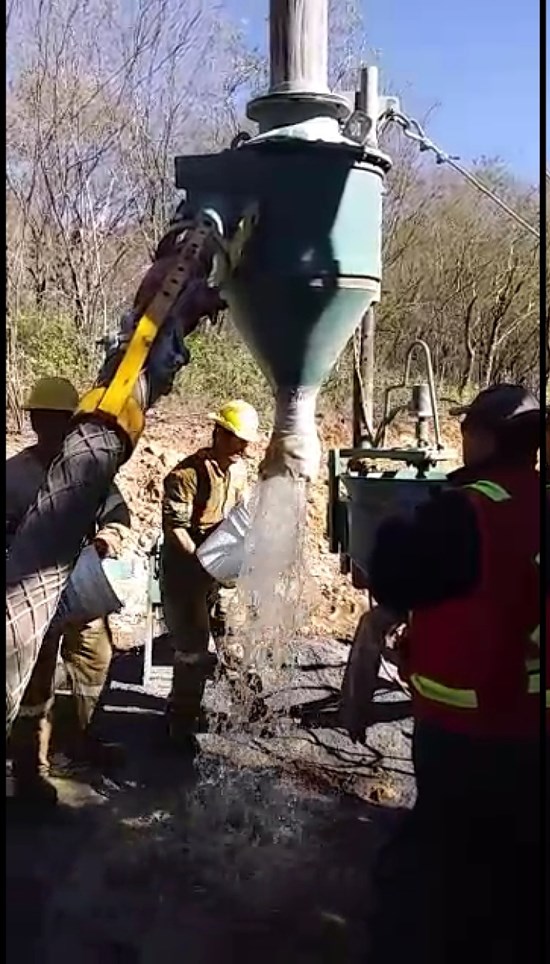 Update on Other Drilling Activities

With the rainy season well behind and construction work now underway, the breadth of new targets and mine site drilling will see the Company expand its drilling rates moving forward with two drilling shifts expected to commence shortly. This should provide a steady flow of drilling news while construction moves forward including the maiden drilling of a number of the new breccia pipe exploration targets identified in the field during 2019.

All diamond drill samples were collected by Minera Alamos personnel including the Company's exploration geologists. Drill core samples were cut in half and divided based on visual observations into typically 1-2 m intervals. One half of the sample was bagged for analysis and the remaining half was logged by Minera Alamos personnel and stored for future reference. Blanks, duplicates, and standards were randomly inserted in the sample stream with the samples sent for analysis as part of the normal QA/QC procedures.

All samples were prepared and analyzed for gold using fire assaying with AA/gravimetric finish in addition to a standard 35-element ICP suite. All samples were sent for sample preparation at the ALS-Chemex facility in Hermosillo, Mexico.

Mr. Darren Koningen, P. Eng., Minera Alamos' CEO, is the Qualified Person responsible for the technical content of this press release under National Instrument 43-101. Mr. Koningen supervised the preparation of, and has approved the scientific and technical disclosures in this news release.

Minera Alamos is an development stage company with a portfolio of high-quality Mexican assets, including the La Fortuna open-pit gold project in Durango (positive PEA completed and change of land use permit granted) and the Santana open-pit heap-leach development project in Sonora (permits received and construction currently underway).

The Company's strategy is to develop low capex assets while expanding the project resources and pursue complementary strategic acquisitions.

To view the source version of this press release, please visit https://www.newsfilecorp.com/release/52188