Use of this site indicates acceptance of the Privacy Policy and Terms of Use.
The information on this Website is not reliable and not intended to provide tax, legal, or investment advice. Nothing contained on the Website shall be considered a recommendation, solicitation, or offer to buy or sell a security to any person in any jurisdiction.
CEO.CA members discuss high-risk penny stocks which can lose their entire value. Only risk what you can afford to lose.
© 2016 - Pacific Website Company Inc.
@newsfile/ml-gold-extends-copper-mineralization-in-open-ended ↻
0 online
Today This week
Search Subscribe
Members of @newsfile/ml-gold-extends-copper-mineralization-in-open-ended

Vancouver, British Columbia--(Newsfile Corp. - November 8, 2018) - ML Gold Corp. (TSXV: MLG) (FSE: XOVN) ("ML Gold" or the "Company") is pleased to report that it has extended the open-ended mineralization at the Tana Zone on its Stars Project in central BC, Canada. Vein-hosted and disseminated copper mineralization has been intersected in Holes 11, 12 and 13 (DD18SS011-013) which were drilled as 100 metre step-out holes from the previously reported hole 10. Additional assays from holes 14, 15 and 16 (DDSS18014-016) are currently being processed.

The Stars Property is ideally located 60km southwest of the resource town of Houston, B.C. The project site is low-elevation, gentle topography, and is accessible by all-season main line resource roads making it ideal for low-cost open-pit mine development.

The Tana Zone is located on the eastern flank of the large 5-kilometre-long magnetic ring anomaly centred within ML Gold's Stars Property. The zone of copper mineralization occurs within and adjacent to a magnetic low and remains open to depth and along strike.

Copper mineralization has been directly related to feldspar porphyry intrusions with zones of increased potassic alteration typically making up the central portions of the mineralized intervals. Observations of the potassic alteration indicate that the mineralization is "leaking" from a larger source. These observations include high grade potassic breccias cemented with chalcopyrite (copper).

The main rock units present are altered feldspar-phyric porphyry intrusions cutting hornfelsed and silicified Hazelton Group volcanic rocks. The newly discovered porphyry unit has now been observed in six separate drill hole at the Tana Zone. ML Gold Geologists have noted many similarities to the Huckleberry deposit in regards to the lithology and mineralization styles.

Hole 13 (DD18-SS013) - Hole 13 cut a large interval of copper mineralization with numerous higher grade sub-intervals (73 metres @ 0.30% CuEq from 54.25 to 127.41 metres; within 183 metres @ 0.25% CuEq from 8.53 to 191.41 metres). Hole 13 intersected abundant disseminated and vein hosted copper mineralization contained within and proximal feldspar porphyry intrusions cutting pervasively silicified and hornfelsed volcanic rocks of the Hazelton Group. Hole 13 was drilled steeply from the same collar location as Hole 12 in the opposite direction to test the mineralization below the extensive QSP alteration observed in Hole 12.

The Tana Zone remains open along strike and at depth where additional drilling is being planned to test this theory. A larger drill will be needed to fully test the depth potential at the Tana Zone. 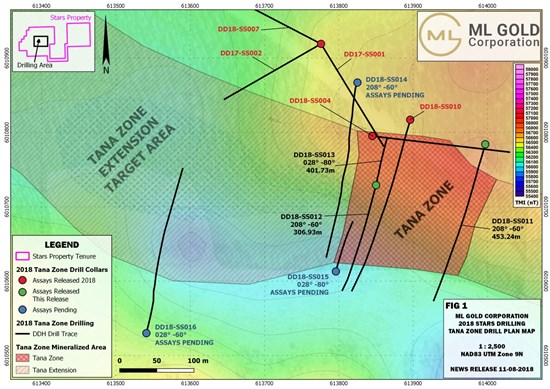 Additional maps are available on the Stars Project page at www.mlgoldcorp.com

The Stars property is host to multiple zones of copper mineralization with roughly 90% of the property remaining untested under glacial till cover. The property covers a large (~5km diameter) magnetic ring feature interpreted as a hornfelsed volcanic contact surrounding a monzonitic to dioritic intrusion centred within the project area. Later hydrothermal fluids and mineralized porphyry intrusions cut through the large monzo-diorite intrusion and surrounding volcanics. This secondary alteration and emplacement resulted in variable magnetic destruction of the hornfels volcanic rocks and possible increased magnetic susceptibility of intrusive rocks. Several primary geophysical targets remain to be tested on the property.

All drill core was logged, photographed, cut and sampled by ML Gold personnel. Prior to shipment to MS Analytical's sample preparation facility in Langley, B.C., certified reference material standards and blanks were inserted at a ratio of approximately one in every 10 drill core samples. Base metal assays are determined by IMS-230 4-acid digestion with ICP-AES/MS finish method, which reports results as parts per million (ppm). All analyses that reach the overlimit of IMS-230 are reanalyzed with an ore-grade method. The analytical results are verified with the application of industry-standard quality control and quality assurance procedures. The gold assays are determined by FAS-111 fire assay method which reports results in parts per million (equivalent to grams per tonne). Any samples with a fire assay that report gold concentrations equal to or higher than 10.0 g/t Au are analyzed by metallic screen method (Au-SCR24).

Adrian Smith, P.Geo., is the qualified person for the Company as that term is defined in National Instrument 43-101, and has supervised the technical information presented within this news release.

ML Gold Corp. is a Canadian listed Company, focused on creating shareholder value through discoveries and strategic development of mineral properties in Canada and the United States.

For additional information please visit the Company's website at www.mlgoldcorp.com. You may also email info@mlgoldcorp.com or call investor relations at (604) 669-2279.

This news release may contain certain "Forward-Looking Statements" within the meaning of the United States Private Securities Litigation Reform Act of 1995 and applicable Canadian securities laws. When or if used in this news release, the words "anticipate", "believe", "estimate", "expect", "target, "plan", "forecast", "may", "schedule" and similar words or expressions identify forward-looking statements or information. These forward-looking statements or information may relate to future prices of commodities, accuracy of mineral or resource exploration activity, reserves or resources, regulatory or government requirements or approvals, the reliability of third party information, continued access to mineral properties or infrastructure, currency risks including the exchange rate of US$ for CDN$, changes in exploration costs and government royalties or taxes in Canada, the United States or other jurisdictions and other factors or information. Such statements represent the Company's current views with respect to future events and are necessarily based upon a number of assumptions and estimates that, while considered reasonable by the Company, are inherently subject to significant business, economic, competitive, political and social risks, contingencies and uncertainties. Many factors, both known and unknown, could cause results, performance or achievements to be materially different from the results, performance or achievements that are or may be expressed or implied by such forward-looking statements. The Company does not intend, and does not assume any obligation, to update these forward-looking statements or information to reflect changes in assumptions or changes in circumstances or any other events affections such statements and information other than as required by applicable laws, rules and regulations.