Use of this site indicates acceptance of the Privacy Policy and Terms of Use.
The information on this Website is not reliable and not intended to provide tax, legal, or investment advice. Nothing contained on the Website shall be considered a recommendation, solicitation, or offer to buy or sell a security to any person in any jurisdiction.
CEO.CA members discuss high-risk penny stocks which can lose their entire value. Only risk what you can afford to lose.
© 2022 - CEO.CA Technologies Ltd.
@newsfile/mountain-boy-geophysical-results-support-potential ↻
0 online
Today This week
Search Subscribe
Members of @newsfile/mountain-boy-geophysical-results-support-potential

The ground-based geophysical program identified two compelling anomalies which correlate well with geological and geophysical results in a part of the property that has seen minimal prior work.

Mountain Boy's Telegraph project spans 289 square kilometers in the northern part of BC's Golden Triangle. It is located in the Traditional Territory of the Tahltan First Nations and in the vicinity of four porphyry deposits being advanced by major mining companies.

Lawrence Roulston, CEO, stated, "The geophysical anomalies are consistent with the district-scale picture that is emerging of a large area prospective for hosting porphyry systems, with possibly multiple mineralized centers. The recent geophysical survey is another step in a systematic approach to exploring this extensive geological system."

The Volterra 3D Induced Polarization (3DIP) survey consisted of 19.6-line kms and measured the resistivity and chargeability of the subsurface rocks. A magnetotelluric (MT) survey conducted in tandem measured the electromagnetic properties of the rocks at greater depth. 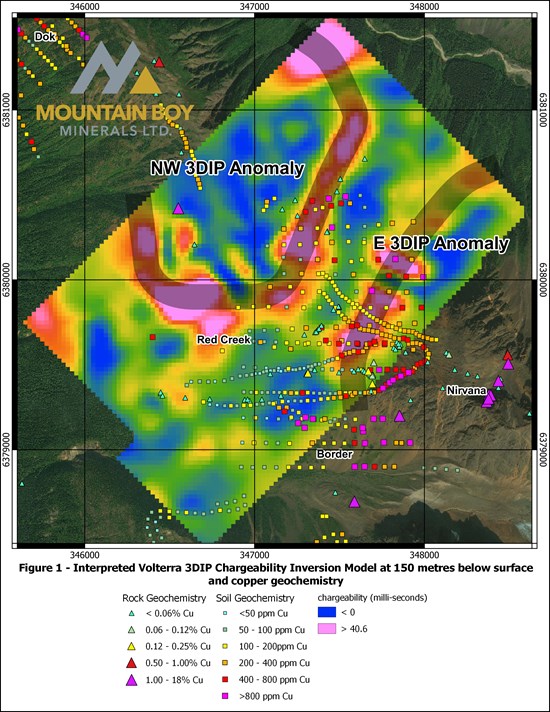 The recent survey identified two compelling anomalies, referred to as the NW 3DIP anomaly and the E 3DIP anomaly (Figure 1). The NW 3DIP anomaly occurs in the northwest portion of the survey grid and consists of a chargeability high shaped like a donut with its northwest side cut off. The donut is cored by a resistivity low. The most prominent chargeability high within the donut occurs at the north of the grid. Limited historic soil geochemistry within this area found anomalous soils of up to 1,220 ppm Cu and 129 ppb Au.

The two anomalies are separated by a distinct north to northeast trending zone characterized by non chargeability and moderate resistivity. This zone appears to be related to a rhyolitic porphyritic unit that has been mapped on surface.

After the 3DIP survey was completed, crews collected soil samples along portions of the 3DIP grid which were not covered by historic soil sampling. Results are pending.

The geologic team spent several weeks examining an extensive area of gossan referred to as the Strata Mountain Gossan, located northeast of the Dok target. The gossan extends for over 8 kilometres and is related to the oxidation of pyrite. It is interpreted to be the peripheral expression of a hydrothermal system. Both pyrite and chalcopyrite were observed in the field. On the basis of the initial interpretation, the property was extended to fully encompass the gossanous area. Assays and other analytical results are pending.

The Chuckster occurrence (Minfile 104G 129), located between the Dok and Yeti targets, was discovered by provincial government mapping in 1964. A grab sample taken by the government geologist assayed 0.29% copper and 136 g/t gold. There is no recorded evidence of any further work in the area. MTB geologists followed up on the occurrence and the surrounding area, discovering numerous mineralized showings with chalcopyrite. Sample results are pending.

Lawrence Roulston, CEO, further noted, "The 2022 field program saw the first comprehensive examination of this extensive geological system. In addition to geophysics, the geological team conducted mapping and sampling in various parts of the property, with several hundred samples in the lab. As well as assays, the samples are being examined with other scientific techniques, such as short-wave infrared analysis and geochronology to extract the maximum information. This season's work identified target areas not previously recognized. A thorough review of the recent results, together with the historic results, will prioritize the various targets and outline the next steps."

The technical disclosure in this release has been read and approved by Andrew Wilkins, B.Sc., P.Geo., a qualified person as defined in National Instrument 43-101.

On behalf of the Board of Directors:

To view the source version of this press release, please visit https://www.newsfilecorp.com/release/138025