Use of this site indicates acceptance of the Privacy Policy and Terms of Use.
The information on this Website is not reliable and not intended to provide tax, legal, or investment advice. Nothing contained on the Website shall be considered a recommendation, solicitation, or offer to buy or sell a security to any person in any jurisdiction.
CEO.CA members discuss high-risk penny stocks which can lose their entire value. Only risk what you can afford to lose.
© 2016 - Pacific Website Company Inc.
@newsfile/northway-provides-exploration-update-and-plans-for ↻
0 online
Today This week
Search Subscribe
Members of @newsfile/northway-provides-exploration-update-and-plans-for

Vancouver, British Columbia--(Newsfile Corp. - May 26, 2020) - Northway Resources Corp (TSXV: NTW) ("Northway" or the "Company") is pleased to provide an update regarding its planned 2020 exploration programs at the Healy and Napoleon Projects, located in central Alaska, USA. 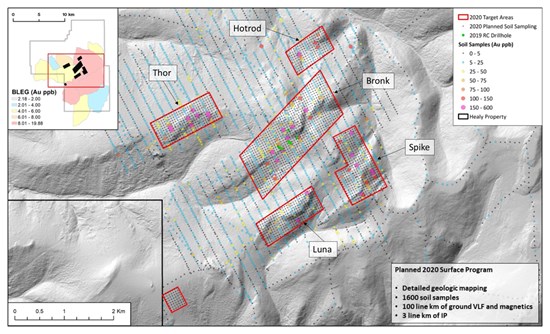 About the Healy Project

The Healy Project was first identified and staked by Newmont Corporation ("Newmont") in 2012. Follow-up prospecting, mapping and systematic soil sampling defined numerous, kilometer-scale gold, arsenic and antimony in soil anomalies. Healy is located along a major northeast trending fault system, as well as the prospective regional contact between metasedimentary rocks and cretaceous intrusive rocks, similar to the neighbouring Pogo and Tibbs areas. The property scale structural geology is defined by numerous low-angle thrust faults cut by steeply dipping northeast trending faults. Gold anomalism seems to be spatially associated with both steeply dipping faults and low angle thrust faults. No recorded exploration work had been done on the Healy property prior to Newmont in 2012 and 2013. The recent 2019 track mounted RC drill program completed by Northway was the first ever drill test of this newly identified gold system in the Goodpaster Mining District of Alaska, host of the world class Pogo gold deposit (10+ million ounces of gold endowment). 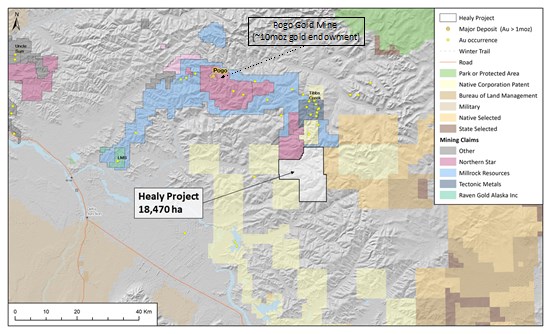 Figure 2. Claim map of the Goodpaster District showing the location of the Healy Project

Northway's 2019 reconnaissance drill program involved a total of 800m of drilling over 10 shallow holes that aimed to test bedrock beneath Bronk, one of the larger soil anomalies on the Healy property. This work led to the discovery of widespread gold mineralization hosted within a 150-200m wide steeply dipping shear zone. The style of mineralization and alteration is consistent with other orogenic gold systems in the Tintina gold belt and represents one of seven compelling target areas that require further exploration.

Zach Flood, CEO of Northway states "We are excited to follow up on the 2019 drill program which led to the discovery of the newest gold system in the Tintina Gold Belt. Our planned work in 2020 aims to build on this exciting new discovery and advance the project towards a more significant diamond drill program." 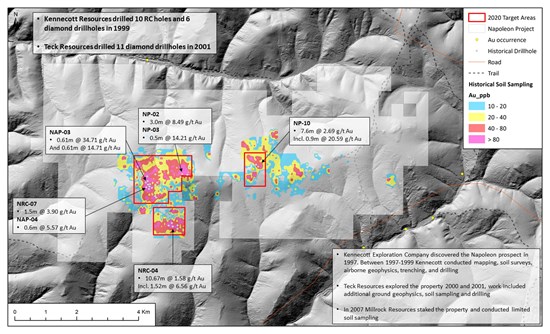 Figure 3. Map of significant historical drill results over gold in soil anomalies at the Napoleon Project

About the Napoleon Project

The Napoleon Project is located in the 40-mile placer district within the prolific Tintina Gold Belt; host of significant deposits such as Donlin Creek, Fort Knox, Pogo, Coffee, Sheelite Dome and Dublin Gulch. High grade gold mineralization at Napoleon is hosted in quartz veins which are related to a regional shear zone that intersects the Jurassic-aged Napoleon pluton. This pluton is located at the headwaters of several streams that have contributed to much of the placer gold production in the district, which is historically estimated at over 500,000 ounces of gold.

From 2000 and 2001 The Napoleon property was explored by Teck Resources. Work during this time included an airborne magnetic and EM survey, soil and rock sampling and 11 diamond drill holes. The best diamond drill intercepts were 0.90m @ 20.59 g/t Au at Twin Peaks Zone, and 3.00m @ 8.49 g/t Au at the Saddle Zone.

The technical content of this news release has been reviewed and approved by Thomas Hawkins P.Geo., VP Exploration for the Company, and qualified person as defined by National Instrument 43-101.

Northway is a Canadian gold exploration company focused in Alaska, USA. The Company is actively exploring the Healy Project, as well as its 100% owned Napoleon Project.

The 100% owned Napoleon Project covers 6065 ha within the historical 40-mile Mining District. An estimated 500,000 ounces of placer gold has been produced from the district.

Further information can be found on the Company's website www.northwayresources.com

To view the source version of this press release, please visit https://www.newsfilecorp.com/release/56529