Use of this site indicates acceptance of the Privacy Policy and Terms of Use.
The information on this Website is not reliable and not intended to provide tax, legal, or investment advice. Nothing contained on the Website shall be considered a recommendation, solicitation, or offer to buy or sell a security to any person in any jurisdiction.
CEO.CA members discuss high-risk penny stocks which can lose their entire value. Only risk what you can afford to lose.
© 2016 - Pacific Website Company Inc.
@newsfile/outcrop-gold-commences-phase-2-drill-program-at-santa ↻
0 online
Today This week
Search Subscribe
Members of @newsfile/outcrop-gold-commences-phase-2-drill-program-at-santa

Vancouver, British Columbia--(Newsfile Corp. - May 5, 2020) - Outcrop Gold Corp. (TSXV: OCG) ("Outcrop") is pleased to announce that drilling has resumed at the Santa Ana high-grade silver-gold project located in Colombia. This Phase 2 program will define the La Ivana mineralized zone to depths of 300 metres in order to build an ore-shoot and vein model and then enter a stage of more widespread drilling on nine targets with a potential cumulative strike length of 10 kilometers. Extensive soil sampling and trenches will define drill tests of each target. The Phase 2 program has a total of approximately 120 core holes planned for a total of 13,000 metres. Drilling will extend through the end of the calendar year and into the first quarter of 2021, providing sustained news flow of drill and surface assays for the next eleven months. Upon completing the 13,000 metres of drilling Santa Ana will be ready to transition to a delineation stage.

Mineral exploration activities have been deemed as essential businesses and the Company has received exemptions to operate from the national government of Colombia.[1] The Ministry of Health and Social Welfare has issued guidelines for employees, local workers and suppliers to follow, aimed at reducing the risk of COVID -19 exposure and infection during the conduct of work. Outcrop submitted a formal action plan demonstrating its adherence to guidelines to both the Ministry and the Mayor of Falan, the community nearest the project.

Outcrop in consultation with and as advised by the municipality of Falan, continues to provide basic food items to local communities and continues to contribute to a local COVID-19 general response fund managed by Falan.

To date no cases of COVID-19 infections are known among Outcrop's team on Santa Ana and Outcrop is adhering to strict guidelines of its agency approved Action Plan. Work includes oversight by a Health and Safety director hired for the project.

Outcrop has defined nine core target areas on the project, named La Ivana, El Dorado, Megapozo, Morales, Pollera, Guanabanera, Roberto Tovar, San Antonio, and Palomos. The vein system consists of north-northeast trending veins, linked by northwest trending veins. Detailed soil sampling and trenching is expected to reveal the general limits of ore-shoots to guide drilling. Later in the summer and fall Outcrop will begin reconnaissance prospecting on nearby Company owned mining title applications- additional vein zones are expected to be identified by this work. The objective of this reconnaissance prospecting will be to identify and or secure vein zones with a cumulative extent of at least 14 km within the Mariquita District- with all vein zones close enough to Santa Ana comprise one consolidated project.

The exploration model assumes drilling will identify numerous ore-shoots with average dimensions of 200 metre strike and 300 metre depth with average widths of 0.8 m to 1.4 m. In places these shoots will contain packages of two or more parallel veins. Potential ore-shoots will be defined by soil lines on 75 m spacing and trenches on 150 m spacing along the strike of vein zones. The expectation is that ore-shoots outcrop or sub-crop- and each 600 metre strike of vein zone will contain a 200 metre ore-shoot. If a vein segment does not express as an outcropping ore-shoot in soils, and or trenches and historic workings it will not be drilled until all anomalous vein segments at surface are drilled as a priority.

Targets and the exploration plan are presented in Map 1 and highlights of target sampling are shown in Table 1. 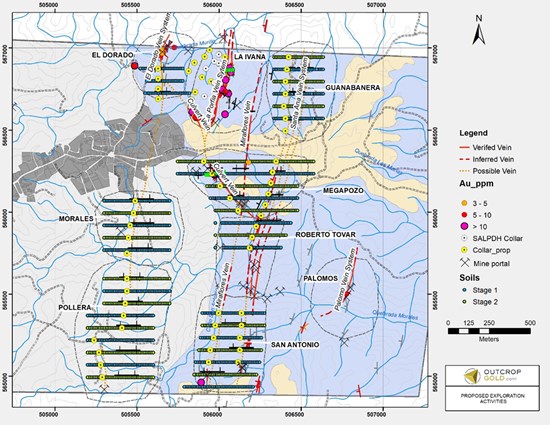 Table 1: Nine targets are supported by 248 samples with highlighted values. The nine target areas offer a potential of 10,000 metres of vein zone. Compared to drill assays, silver values may be depleted at surface.

There are strong suggestions that silver is mobile and that silver values are commonly attenuated in the oxide zone at surface - and in many cases silver values will be higher in unoxidized veins. This is suggested in drilling at the La Ivana and Roberto Tovar targets - where surface samples show lower average values than drill assays.

Exploration work will produce over 4,900 samples from soil profiles and trenches. This will represent 10 linear kilometers of soil profiles on 10 metre spacing and 950 linear metres of trenches across mapped and projected vein zones. This work is expected to confirm up to 8 to 10 kilometres of cumulative vein zones and commonly each vein zone will contain two or more parallel veins.

Soils and trenches would then move to the Palomos zone on the east side of the project where abundant vein float samples in drainages and limited workings suggest another 2 kilometres of vein zone may extend across the project.

If the 2 kilometres of the Palomos vein zone is also productive, up to 16 ore-shoots are possible from 13,000 metres. Ore shoots identified would require subsequent delineation but the "base case" for each ore shoot is 40,000 to 70,000 eq gold ounces at from 12 to 16 g eq g Au/t. Silver-gold ratios vary widely from 8:1 to 400:1. For rough estimates of exploration potential Outcrop is using gold - equivalent ounces, although on project wide basis - more gross metal value will be in silver. All estimates are purely for the purposes of exploration strategy and planning and not intended for any other use. Any estimates would have to be confirmed by independent qualified persons.

For perspective on other high-grade, narrow vein systems in Colombia-intercept widths at Santa Ana compare well with some of the early mechanized, long-hole test stopes at Continental Gold's Buritica project. At Buritica the 1.2-metre-wide San Antonio vein was developed with a 0.3 metre overbreak on each side to result in a designed 2.3-metre-wide stope. (from Continental news release of February 4th, 2016).

This is compelling evidence that away from and deeper than primitive workings, Outcrop will drill thicker veins on average where there is no truncation by historic mining and that close spaced parallel veins are common. Outcrop expects to see further in the program vein intercepts of 1.0 to 1.4 metres on average and multiple closed-spaced veins as the norm. At Buritica local close-spaced veins and wall-rock stockwork (Buritica bulk mineralized zones) can be mined in bulk in wider mechanized stopes.

The Santa Ana project comprises 3,538 ha located in the Municipality of Falan, Tolima Department, Colombia, approximately 15 km southeast of the of the town of Mariquita, and 190 km from Bogota, Colombia's capital city. The Santa Ana project covers a significant part of the Mariquita District where mining records date to at least 1585. The Mariquita District is the highest-grade primary silver district in Colombia. Under colonial Spanish era control of the mines, silver grades were reported to be among the highest in Latin America with the fourteen mines of Santa Ana producing average smelter returns of 4,300 g Ag/t from veins averaging 1.4 m wide.

Historic mining depths support a geologic and exploration model for a composite mesothermal and epithermal vein system having mineralization that likely extends to great depth. At Santa Ana it is unlikely that there is sharp elevation restriction common to high-grade zones in many epithermal systems with no mesozonal component.

Outcrop is a gold prospect generator active in Colombia acquiring gold exploration projects with world-class discovery potential. Outcrop performs its own grass roots exploration and then employs a joint venture business model on its projects to maximize investor exposure to discovery and minimize financial risk. Outcrop has seven primary projects in Colombia with three at an advanced stage of exploration. Outcrop will conduct focused drilling on flagship properties such as Santa Ana to create its own catalysts for value creation and to receive full value for future joint ventures or dispositions.

The technical information in this news release has been approved by Joseph P Hebert, a qualified person as defined in NI43-101 and President and Chief Executive Officer to the Company.

[1] Government Circular 4011 issued by the Colombian Ministry of Mines and Energy on April 17th, 2020, lifting operating restrictions for mineral exploration subject to COVID -19 guidelines and a Company filing of operating protocols regarding compliance plans.

To view the source version of this press release, please visit https://www.newsfilecorp.com/release/55387