Use of this site indicates acceptance of the Privacy Policy and Terms of Use.
The information on this Website is not reliable and not intended to provide tax, legal, or investment advice. Nothing contained on the Website shall be considered a recommendation, solicitation, or offer to buy or sell a security to any person in any jurisdiction.
CEO.CA members discuss high-risk penny stocks which can lose their entire value. Only risk what you can afford to lose.
© 2016 - Pacific Website Company Inc.
@newsfile/roscan-expands-gold-zone-at-mankouke-and-releases-new ↻
0 online
Today This week
Search Subscribe
Members of @newsfile/roscan-expands-gold-zone-at-mankouke-and-releases-new

Halifax, Nova Scotia--(Newsfile Corp. - August 16, 2019) - Roscan Gold Corporation (TSXV: ROS) ("Roscan" or the "Company") is pleased to announce further positive new assay results (shown as highlighted in yellow on Figure 2) from both its Diamond Core (DD) and Air Core (AC) Drilling programs at its Kandiole Project in Mali, West Africa. This drilling program was completed during April to July of 2019 and was designed to test both the north and south extensions of the Mankouke gold discovery zone and also test many other strong termite and soil gold anomalies that occur on the land package. The Mankouke gold discovery has been shown by detailed drilling to have a strike length to date of at least 600 metres.

In addition, the recent very impressive AC drilling assay results at the southern end of the Mankouke permit, as shown on both the plan in Figure 1 and on the section in Figure 3, indicates a 7-kilometer-long exploration corridor at Mankouke. This area will be a priority drilling target for the next exploration program.

A summary of significant new assay results is presented in Table 1.

Note: True widths cannot be determined with the information available

Greg Isenor, President and CEO of Roscan Gold stated "We are continuing to show that we have an excellent new gold discovery at Mankouke that appears to have both strike and depth continuity. Our land package has great potential and we are extremely encouraged by the hits we are seeing on the outside termite gold targets. There are many AC assays yet to be released and these will be available in the coming weeks. We are extremely pleased our approach to exploration in this area has been successful. It is "early days" and additional drilling is part of an obvious next step and extensive follow up drilling is required.

The drilling around the Mankouke discovery shows that a strong mineralizing system exists and is "alive". This is not supergene mineralization. The drilling season is over for a few months; however, deep holes are planned when we return to drilling after the rain season. We have the funds to continue drilling after the seasonal rains. In addition, the excellent AC results, including 5.86 g/t gold over 26 metres and 3.74 g/t gold over 30 metres, we received in the south of the Mankouke permit (see fig 1 and fig 3) will be followed up as soon as possible."

A total of 607 AC holes were drilled for a total meterage of 28,037. All results have been received and now being processed. The AC drilling, completed over the entire land package, tested the most important termite anomalies. Lines of AC holes were drilled across the target areas, generally in an east-west direction, at -50 degrees to the west and to a depth of 45 to 60 metres in a heel to toe fashion. AC drilling is used to sample unconsolidated ground and compressed air is used to remove the cuttings from the hole. During the Kandiole drilling program, 2-kilogram samples were collected, over 2 metre intervals and sent to the laboratory. A check sample of approximately 5 kilograms was collected for possible future tests.

The Mankouke Trend gold mineralization is hosted in breccia zones which are interbedded with saprolitic metasediments. Drilling to date has intersected gold mineralized breccia (8.63 g/t Au over 10 metres from 79.1 metres to 89.1 metres along the drill hole) at a vertical depth of approximately 60 metres. This drilling indicates that the gold discovery initially reported (News Release January 24, 2019) has "roots" and not supergene. This drilling information clearly shows the potential at depth in this area and identifies that this is a Birimian hydrothermal type gold mineralization.

The shallow detailed AC drilling at Mankouke continues to point out the northern extension of gold mineralization. Diamond drilling to date has also been shallow with the average depth of 110 metres. There has been gold host rock, breccia development identified in most of the diamond core holes drilled to date, so we are confident of the mineralizing system. At this point we interpret a north east plunge of the system and deep drilling is required. An airborne survey is planned to cover the area and will greatly assist in identifying structures for control in deeper drilling.

During the period of the rainy season from July to October, assay results will be evaluated. It is expected that drilling will resume during October and will primarily consist of diamond drilling to test for both the extensions of the Mankouke gold discovery, and to test the significant AC intersections identified in other areas of the property. AC drilling will also be continued to test the remaining termite and gold soil anomalies located on the land position and not previously tested.

In addition, an airborne survey is planned to cover the entire land package.

The technical content in this news release has been reviewed and approved by Gregory P. Isenor, P. Geo, a Qualified Person as defined by NI 43-101.

For quality control, duplicated samples were systematically collected in the field, and blank samples were inserted in the sample batches sent to the laboratory. Blank samples and duplicates were included in the sample batches sent to the lab. Before their transportation, the samples were stored in a Roscan secured location in the field. Batches of samples were transported by truck, driven by Roscan contractors, up to the sample preparation installations of Bureau Veritas laboratory at Bamako; prepared samples were then shipped by Bureau Veritas to their treatment installations at Abidjan, Ivory Coast. During the assay process, the laboratory applied its own quality controls with blanks, duplicates and standard samples. The assay method was atomic absorption (AA) with pre-concentration by fire assay (FA); the detection limit of the method is of 5 ppb.

Roscan Gold Corporation is a Canadian gold exploration company focused on the acquisition and exploration of gold properties in West Africa. The Company has assembled a significant land position of 100%-owned permits in an area of producing gold mines (including B2 Gold's Fekola Mine which lies in a contiguous property to the west of Kandiole), and major gold deposits, located both north and south of its Kandiole Project in west Mali. 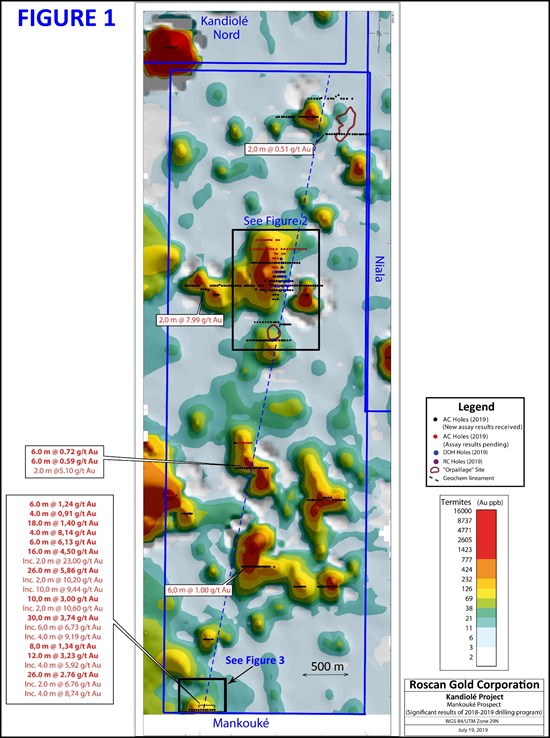 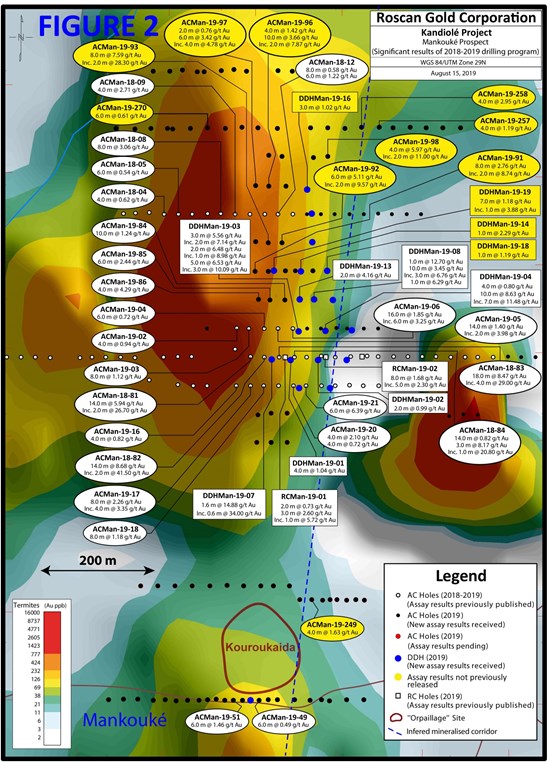 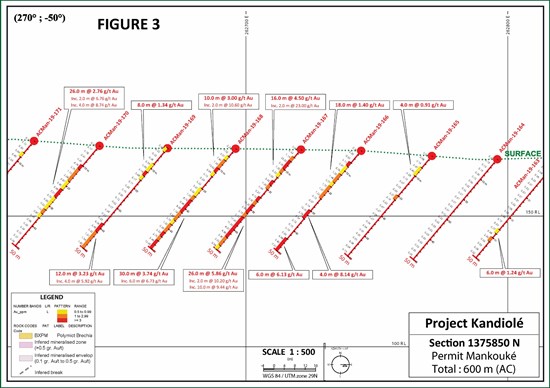 To view the source version of this press release, please visit https://www.newsfilecorp.com/release/46999