Use of this site indicates acceptance of the Privacy Policy and Terms of Use.
The information on this Website is not reliable and not intended to provide tax, legal, or investment advice. Nothing contained on the Website shall be considered a recommendation, solicitation, or offer to buy or sell a security to any person in any jurisdiction.
CEO.CA members discuss high-risk penny stocks which can lose their entire value. Only risk what you can afford to lose.
© 2016 - Pacific Website Company Inc.
@newsfile/sokoman-iron-cuts-2490-m-of-3356-gt-au-at-eastern ↻
0 online
Today This week
Search Subscribe
Members of @newsfile/sokoman-iron-cuts-2490-m-of-3356-gt-au-at-eastern

St. John's, Newfoundland--(Newsfile Corp. - November 16, 2018) - Sokoman Iron Corp. (TSXV: SIC) ('Sokoman' or 'the Company') is pleased to announce that it has received assay results for five of seven holes completed to date in the Eastern Trend, part of the Phase 2 drilling on the Moosehead Project, Central Newfoundland, and that diamond drilling is continuing with two drill rigs. Approximately 5,000 metres in 19 holes have been completed property wide thus far in Phase 2. Program highlights include:

Timothy Froude, P. Geo., President and CEO, states: "Early results from the Phase 2 drilling have expanded the extent of high-grade gold mineralization in the Eastern Trend, as well as discovering a potentially significant new zone of gold mineralization in MH-18-103, one km to the north of the Eastern Trend. The drill holes have also demonstrated that the orientation of the structure hosting the Eastern Trend mineralization is different than initially thought, and that future drill testing of the Eastern Trend would be more effectively completed during the winter from the ice on North Pond. This will result in shorter drill holes required to intersect and define the lateral extent of the Eastern zone, than drilling from the west of North Pond. Moosehead is a complex system and we are learning with every hole. Rig #2 has made a potentially significant discovery in MH-18-103, located approximately 1 km to the north that requires further testing in an area with little previous drilling."

The Phase 2 drilling also indicates that the Eastern Trend mineralization appears to be moderately north to northeast dipping, not a subvertical, west dipping structure as initially thought. This new structural interpretation also suggests that the Eastern and Western trends may be linked, with deformation and therefore gold mineralization, stronger in the Eastern Trend area. The idea of this linkage was initially proposed in a structural report on the Moosehead property by previous operators in 2016. Seven holes totaling 777 metres have been completed in the Western Trend following up on results from Phase 1 that included 2.28m grading 42.36 g/t Au from MH-18-08 (Sokoman News Release August 29, 2018). 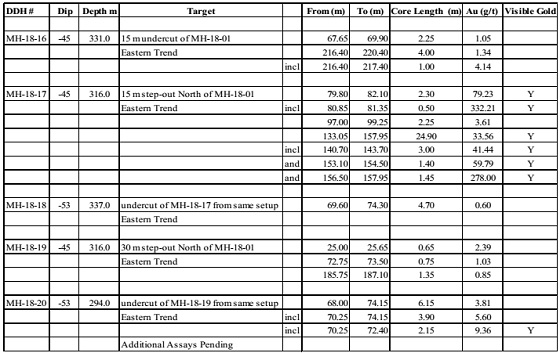 If you cannot view this Table, please visit:
https://orders.newsfilecorp.com/files/6079/41116_sokomon1enhanced.jpg

Note: Core length intercepts reported are 50 to 90% of true thickness.

Rig #2 has completed five holes (1,331 metres, holes MH-18-101 to 105) testing targets up to one km to the north of the Eastern and Western Trend areas (see attached plan). These include a zone of historical anomalous soil and float samples with values ranging from less than 5 ppb Au to a maximum of 64 ppb Au in soils, and from less than 5 ppb Au to a maximum value of 180 g/t Au in rock float samples* outlined over a 400 metre strike length by previous operators. A 2002 drill hole, MH-02-39, in the vicinity of the historical anomalies, reported an eight metre zone of brecciation and veining with maximum assays of 552 ppb Au over 2.3 m* in a broader zone of anomalous gold values. *Values reported are historical in nature and not verified by Sokoman Iron Corp.

Sokoman drill hole MH-18-103, collared 30 metres ahead (west) of MH-02-39, intersected the historical brecciated zone, but continued beyond the termination of the 2002 drill hole and intersected a second, more strongly mineralized vein zone, 2.40 m in core length (true thickness unknown at this time). This lower zone, with 3-5% pyrite, sphalerite and sulphosalt (boulangerite) with visible gold, lies approximately 30 metres beyond the termination of the 2002 drill hole. The lower vein zone is similar to high-grade mineralized veins in the Western Trend, located one km to the south, and to the high-grade boulders located just west of the collar. Sokoman believes this second vein zone is the source of the high-grade float found in this area immediately to the west of the collar. Additional drilling is ongoing in this area, which represents the northernmost holes drilled on the property.

A total of 1300 samples, including duplicates, blanks and standards, have been submitted to Eastern Analytical Ltd. in Springdale, Newfoundland for gold and ICP analysis. Samples with possible visible gold were submitted for total pulp metallics and gravimetric finish. All other samples were analyzed by standard fire assay methods. Eastern Analytical is an accredited assay lab that conforms to requirements of ISO/IEC 17025. Total pulp metallic analysis is a result of a whole sample being crushed to -10 mesh and pulverized to 95% -150 mesh. The total sample is then weighed and screened 150 mesh. The +150 mesh fraction is fire assayed for Au, and a 30 g subsample of the -150 mesh fraction is fire assayed for Au. A calculated weighted average of total Au in the sample is reported as well. The Company included in the sample stream one blank and one industry approved standard for every twenty samples submitted, as well as random duplicates of selected samples. This is in addition to the in-house standard and duplicate policy of Eastern Analytical.

This news release has been reviewed and approved by Timothy Froude, P. Geo., a "Qualified Person" under National Instrument 43-101 and President and CEO for Sokoman Iron Corp.

Drilling services is being provided by the Diamond Drilling Division of Springdale Forest Resources Inc., a diversified natural resources-focused company based in Springdale, NL. The Company would also like to thank the Government of Newfoundland and Labrador for approving the Moosehead Program for 2018 JEA Funding.

Investors are cautioned that trading in the securities of the Corporation should be considered highly speculative. Except for historical information contained herein, this news release contains forward-looking statements that involve risks and uncertainties. Actual results may differ materially. Sokoman Iron Corp. will not update these forward-looking statements to reflect events or circumstances after the date hereof. More detailed information about potential factors that could affect financial results is included in the documents filed from time to time with the Canadian securities regulatory authorities by Sokoman Iron Corp. 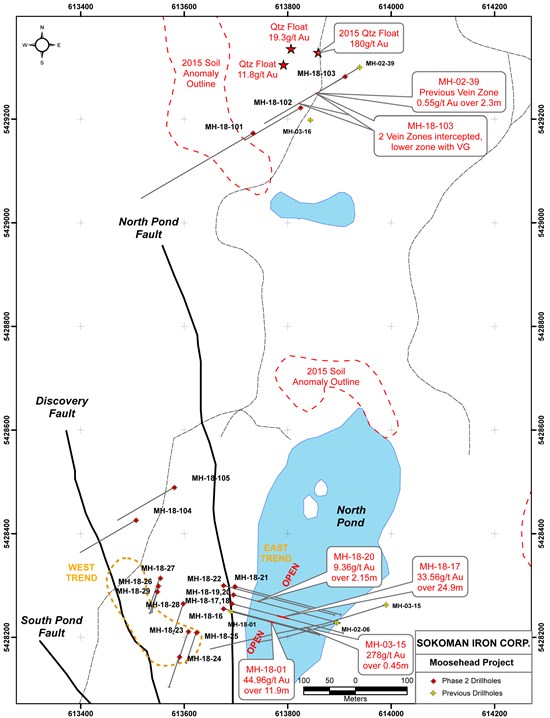 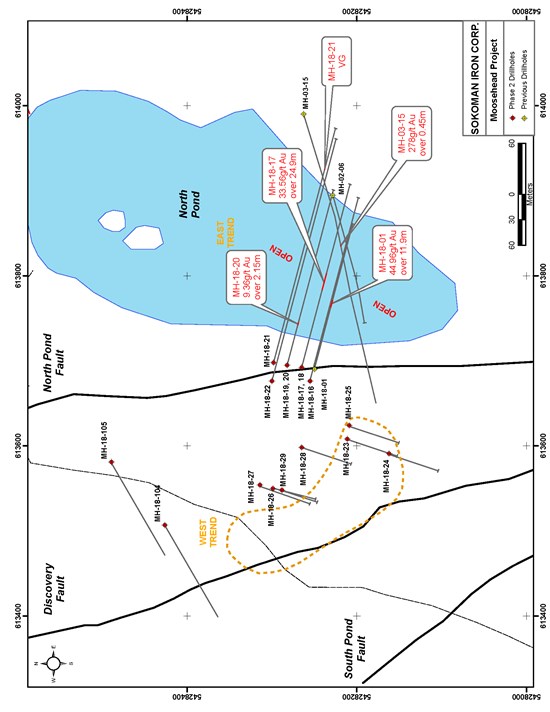 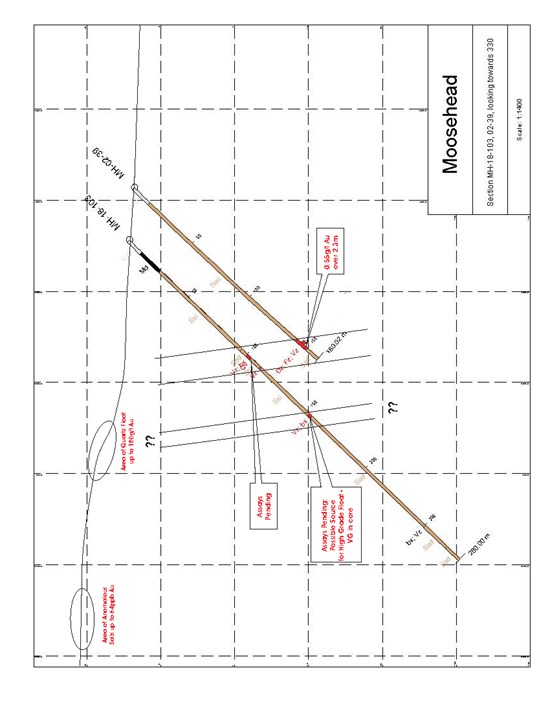