Use of this site indicates acceptance of the Privacy Policy and Terms of Use.
The information on this Website is not reliable and not intended to provide tax, legal, or investment advice. Nothing contained on the Website shall be considered a recommendation, solicitation, or offer to buy or sell a security to any person in any jurisdiction.
CEO.CA members discuss high-risk penny stocks which can lose their entire value. Only risk what you can afford to lose.
© 2022 - CEO.CA Technologies Ltd.
@newsfile/vendetta-announces-high-grade-intersections-in-zones ↻
0 online
Today This week
Search Subscribe
Members of @newsfile/vendetta-announces-high-grade-intersections-in-zones

by @newsfile on 28 Feb 2018, 09:00
Vendetta Announces High Grade Intersections in Zones 2 and 3 at the Pegmont Lead-Zinc Project

Vancouver, British Columbia--(Newsfile Corp. - February 28, 2018) - Vendetta Mining Corp. (TSXV: VTT) (the "Company") is pleased to announce the final results from the completed 2017 program at the Pegmont Lead-Zinc Project in Queensland, Australia. These results are from drilling in Zones 2, 3 and the connecting Z Fold.

A full summary of the sulphide and transition lead-zinc results including estimated true widths are provided in Table 1 and the location of the holes is shown on the map in Figure 1.

Michael Williams, Vendetta's President and CEO commented, "These final results conclude a highly successful 2017 program. In the upcoming mineral resource update we expect to upgrade a significant portion of the mineral resource within the open pit shells and we will include the recently discovered high grade Bridge Zone."

Zone 2 is a flat to moderately dipping area, located between 50 and 100 m from surface, with a known strike length of 2 km.

A new fold structure was intersected in hole PVRD137, as with other such folds at Pegmont it was associated with increased grades. Preliminary structural modelling suggest that this fold should develop to the south-west, further drilling is required to develop this opportunity further.

Three holes; PVRD096, 124 and 156 intersected the mineralised beds multiple times in a relatively large drag fold referred to as the "Z Fold", located between Zones 2 and 3. Holes PVRD096 and 124 are on adjacent sections, PVRD156 is now the northern most intersection in the Z fold to date. PVRD156 intersected the upper limb and passed through the diagonal limb and the lower fold, the 36.61 m long high grade intersecting represents a vertical height of 34.7, with an estimated true thickness on the upright limb of 9.4 m and an estimated true thickness on the lower limb of 8.0 m. This excellent result indicates that further drilling in the Z fold to the north-east is warranted.

Eight holes were drilled outside of the optimised pit shells in Zone 3, they were drilled to better define the limits of the known attenuated zone immediately down dip of the high grade Z fold metal accumulation. These holes confirmed the current model in this area.

Two holes, PVRD161 and 162 were drilled to test the apparent gap between the two of the optimised pit shell centres. PVRD161 intersected a strongly mineralised steeply dipping limb of a fold, not in the current geological model and indicates that further drilling to the south-west is needed, this presents an opportunity to potentially connect the two pit shells. PVRD162 drilled the flat dipping lower limb of this new fold, although low grade.

Metallurgical test work on five composites from Zones 1, 2, 3 and Bridge Sulphides, and Zone 1 Transition is progressing at ALS Metallurgical laboratory in Burnie, Tasmania.

Open cycle test work on the five composites has been completed, locked cycle test conditions have been set and those tests are now being completed. Results will be released as they are finalised. 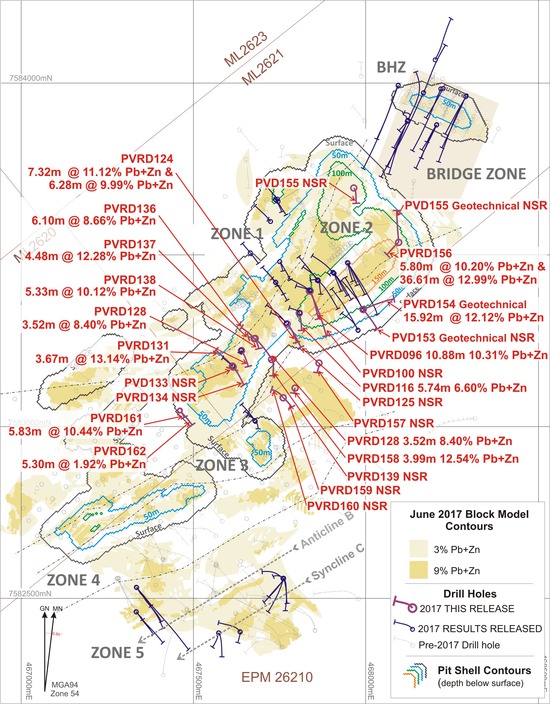 To view an enhanced version of Figure 1, please visit:
https://orders.newsfilecorp.com/files/2983/33177_vendetta1enhanced.jpg

Notes on Drilling and Assay QA/QC

The drilling involved drilling RC pre-collars using a 5.75 inch diameter face sampling bit to depth prior to casing and continuing the hole in either NQ2 or HQ2 diamond core. Diamond core samples were taken on nominal 1 m lengths but varied to match geological contacts. Samples of the core are obtained using a diamond saw to half cut the core, retaining a half for a permanent core record.

Field duplicate samples were taken and blanks and commercially prepared certified reference materials (standards) were added into the sample sequence for every hole submitted. These were analysed by the Company and no issues were noted with analytical accuracy or precision.

Samples used for the results described herein were prepared and analyzed at ALS Laboratory Group in Townsville, Queensland. Analysis was undertaken using a four acid digest and ICP (ALS method: ME-ICP61 for 7 elements) with over limit (>10,000 ppm lead and zinc and >100 ppm silver) high grade samples being read with an atomic absorption spectrometer (AAS), (ALS methods: Pb-OG62, Zn-OG62 and Ag-OG62).

Drill hole collars are located using handheld GPS, and the collars have since been surveyed by a licensed surveyor. Down hole surveys were undertaken using a true north seeking gyroscope with stations nominally every 6 m.

All diamond core is orientated using digital core orientation systems, this data is incorporated into the 3D interpretations. Assay intervals shown in Table 1 are down hole intervals, and the true thickness noted are based on 3D interpretations of the host lithology, structure, and mineralization.

About The Pegmont Lead Zinc Project

Pegmont is a stratiform, Broken Hill-Type deposit that outcrops with an overall shallow dip to the south east and is hosted in a magnetite-rich banded iron formation within high grade metamorphic rocks. The project consists of three granted mining leases and one exploration permit that cover an area of approximately 8,290 ha.

Pegmont is located 25 km west of South 32's Cannington silver-lead-zinc operation, one of the world's largest producers of lead and silver and 28 km north of Chinova Resources' Osborne copper-gold operations. Pegmont is proximal to existing infrastructure including public roads, mine haul roads, rail, and a natural gas pipe line for power generation.

Vendetta Mining Corp. is a Canadian junior exploration company engaged in acquiring, exploring, and developing mineral properties with an emphasis on lead and zinc. It is currently focused on the advanced stage Pegmont Lead Zinc project in Queensland, Australia. Additional information on the Company can be found at www.vendettaminingcorp.com

Peter Voulgaris, MAusIMM, MAIG, a Director of Vendetta, is a non-independent qualified person as defined by NI 43-101. Mr. Voulgaris has reviewed the technical content of this press release, and consents to the information provided in the form and context in which it appears.

The TSX Venture Exchange does not accept responsibility for the adequacy or accuracy of this release.

Certain statements within this news release, other than statements of historical fact relating to Vendetta Mining Corp., are to be considered forward-looking statements with respect to the Company's intentions for its Pegmont project in Queensland, Australia. Forward-looking statements include statements that are predictive in nature, are reliant on future events or conditions, or include words such as "expects", "anticipates", "plans", "believes", "considers", "significant", "intends", "targets", "estimates", "seeks", attempts", "assumes", and other similar expressions.

The forward-looking statements are based on a number of assumptions which, while considered reasonable by Vendetta Mining Corp., are, by their nature, subject to inherent risks and uncertainties and are not guarantees of future performance. Factors that could cause actual results to differ materially from those in forward-looking statements include: the interpretation of previous and current results from the 2017 drilling program mentioned in this news release, further results from the 2017 drilling program, the accuracy of exploration results, the accuracy of Mineral Resource Estimates, the anticipated results of future exploration, the forgoing ability to finance further exploration, delays in the completion of exploration, delays in the completion of the updated Mineral Resource Estimate, the future prices of lead, zinc, and other metals, and general economic, market and/or business conditions. There can be no assurances that such statements and assumptions will prove accurate and, therefore, readers of this news release are advised to rely on their own evaluation of the information contained within. In addition to the assumptions herein, these assumptions include the assumptions described in Vendetta Mining Corp.'s Management's Discussion and Analysis for the three months ended August 31st, 2017.

Although Vendetta Mining Corp. has attempted to identify important risks, uncertainties and other factors that could cause actual performance, achievements, actions, events, results or conditions to differ materially from those expressed in or implied by the forward-looking statements, there may be other risks, uncertainties and other factors that cause future performance to differ from what is anticipated, estimated or intended. Unless otherwise indicated, forward-looking statements contained herein are as of the date hereof and Vendetta Mining Corp. does not assume any obligation to update any forward-looking statements after the date on which such statements were made, except as required by applicable law.