Use of this site indicates acceptance of the Privacy Policy and Terms of Use.
The information on this Website is not reliable and not intended to provide tax, legal, or investment advice. Nothing contained on the Website shall be considered a recommendation, solicitation, or offer to buy or sell a security to any person in any jurisdiction.
CEO.CA members discuss high-risk penny stocks which can lose their entire value. Only risk what you can afford to lose.
© 2016 - Pacific Website Company Inc.
@newsfile/vendetta-announces-pegmont-project-awarded-grant-from ↻
0 online
Today This week
Search Subscribe
Members of @newsfile/vendetta-announces-pegmont-project-awarded-grant-from

Vancouver, British Columbia--(Newsfile Corp. - August 12, 2020) -  Vendetta Mining Corp. (TSXV: VTT) ("Vendetta" or the "Company") is pleased to announce that it has been awarded an A$200,000 grant under the Queensland Government's Collaborative Exploration Initiative ("CEI") to test a conceptual exploration target, the Pegmont Deeps Zinc Target, as described below.

The CEI is a Queensland Government initiative designed to encourage the testing of new exploration concepts of economic and technical merit by directly supporting companies to test high quality exploration targets. The focus for this CEI round was on minerals deemed to be "new economy" minerals, critical for the future of the Queensland Mining industry, of which zinc is viewed to be a key component. The Pegmont Deeps Zinc Target was one of 25 high-quality projects recognised, with Vendetta securing the maximum funding available.

The Pegmont Deeps Zinc Target is the postulated tracing of the Pegmont mineralised banded iron stone ("BIF"), at depth, into the lower limb of a large fold, where Zinc is anticipated to be dominant sulphide.

Metal zonation is a characteristic of Broken Hill Type deposits, such a zonation is present at Pegmont. Lead to Zinc ratios change from 2.5:1 in Zone 1 to 1:1 in Zone 5. Several pieces of structural evidence have now been synthesised and a large-scale fold nose has been recognised in Zone 5. Continued tracing of the BIF into the position of the lower fold limb (see Figure 1), at depth below the current known mineralisation, may yield a Zinc dominant system, if the conceptual structural model proves correct.

The CEI grant will fund the drilling of two 700 m deep drill holes, designed to test for the theorised repetition of the Pegmont host sequence at depth, as show in the schematic cross section below.

Vendetta will send the drill core from the two holes to be analysed by a hyperspectral core scanning system, an automatic system for logging the mineral / chemical and textural variations in drill core. Apart from the BIF and its associated garnet selvage there are no other known marker horizons at Pegmont. It is hoped that the hyperspectral core scanning will help to identify and characterise different quartzite/gneissic beds at Pegmont.

Peter Voulgaris, Director and Project Manager commented: "The acknowledgement of the target is a welcome endorsement of the potential that remains at Pegmont. While the Company's focus has been, and remains, value driven resource development, this Queensland Government initiative allows us the flexibility to step away from that development focus and test a very exciting conceptual structural target. If successful, the potential resource expansion has been enhanced significantly." 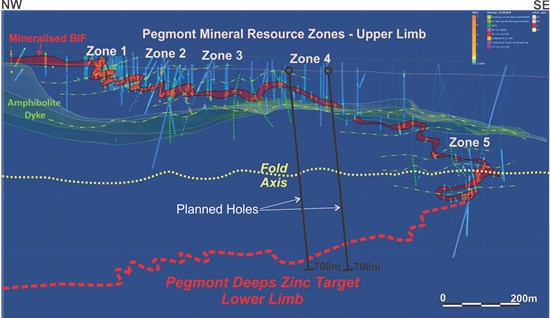 With the Pegmont field season typically staring in March/April the Company felt it was not in the interests of our contractors and the broader community in which we work to safely commence drilling activities in Q1 2020. As a result, Vendetta made an application to the Queensland Government for relief from the balance of the minimum prescribed exploration expenditure on EPM 26210 for the 12-month period ending August 2020. The application has been approved.

The company is now preparing a COVID-19 operating procedure, in line with Australian Federal and Queensland State Government directives which will allow drilling activities to commence and has started planning the drilling of the Pegmont Deeps Zinc Target and a broader drilling program.

Michael Williams, CEO commented: "We would like to acknowledge the very meaningful efforts of the Queensland Government including the CEI program, exploration tenement rent and expenditure relief provided during the extraordinary conditions that explorers and developers are currently facing. The importance of mining and exploration to the Queensland economy is evident in these efforts and we consider ourselves fortunate to be operating in such a supportive jurisdiction."

In support or a larger drilling program starting with the drilling of the Pegmont Deeps Target the Company is announcing a non-brokered private placement of up to 6,250,000 units (the "Units") at a price of $0.08 per Unit for gross proceeds of $500,000. Each Unit will be comprised of one common share and one-half of one common share purchase warrant exercisable for two years at a price of $0.11 per share.

The private placement is subject to the approval of the TSX:V and the securities will be subject to a four-month hold period under securities laws. Net proceeds from the financing will be used to advance the development of the Pegmont Lead-Zinc project as described above and for general working capital.

Finder's fees of up to 7% cash or 7% shares may be payable in this private placement.

About the Pegmont Lead Zinc Project

The current Mineral Resource Estimate at the Project:

Vendetta Mining Corp. is a Canadian junior exploration company engaged in acquiring, exploring, and developing mineral properties with an emphasis on lead and zinc. It is currently focused on advancing the Pegmont Lead Zinc project in Australia. Additional information on the Company can be found at www.vendettaminingcorp.com.

Peter Voulgaris, MAIG, MAusIMM, a Director of Vendetta, a non-independent qualified person as defined by NI 43-101 - Standards of Disclosure for Mineral Projects. Mr Voulgaris has reviewed and approved the technical content of this press release, and consents to the information provided in the form and context in which it appears.

For details of the Pegmont Project including the effective date of the resource estimate, quality control measures applied, key assumptions, parameters and methods used to estimate the mineral resources set forth herein and any known legal, political, environmental or other risks that could materially affect the potential development of the mineral resource estimate, please refer to the technical report entitled "Technical Report - Pegmont Mineral Resource Update and PEA" dated effective January 21, 2019 and available under the Company's profile at www.sedar.com.

The Preliminary Economic Assessment (PEA) referred to herein, is preliminary in nature and includes Inferred Mineral Resources that are considered too speculative geologically to have the economic considerations applied to them that would enable them to be categorized as mineral reserves, and there is no certainty that the preliminary economic assessment will be realized.

The TSX Venture Exchange does not accept responsibility for the adequacy or accuracy of this release.

Certain of the statements and information in this news release constitute "forward-looking information" within the meaning of applicable Canadian provincial securities laws. Any statements or information that express or involve discussions with respect to interpretation of exploration programs and drill results, predictions, expectations, beliefs, plans, projections, objectives, assumptions or future events or performance (often, but not always, using words or phrases such as "expects", "is expected", "anticipates", "believes", "plans", "projects", "estimates", "assumes", "intends", "strategies", "targets", "goals", "forecasts", "objectives", "budgets", "schedules", "potential" or variations thereof or stating that certain actions, events or results "may", "could", "would", "might" or "will" be taken, occur or be achieved, or the negative of any of these terms and similar expressions) are not statements of historical fact and may be forward-looking statements or information.

To view the source version of this press release, please visit https://www.newsfilecorp.com/release/61543