4 Aug 2020, 07:50
@accesswire Anaconda Mining Declares a Mineral Reserve at the Argyle Deposit and Finalizes Mine Plan with an After-Tax IRR of 245% at Cad$1,900 Per Ounce $ANX $ANXGF
show more ▾

Use of this site indicates acceptance of the Privacy Policy and Terms of Use.
The information on this Website is not reliable and not intended to provide tax, legal, or investment advice. Nothing contained on the Website shall be considered a recommendation, solicitation, or offer to buy or sell a security to any person in any jurisdiction.
CEO.CA members discuss high-risk penny stocks which can lose their entire value. Only risk what you can afford to lose.
© 2016 - Pacific Website Company Inc.
@newswire/anaconda-mining-discovers-new-prospective-areas-at ↻
0 online
Today This week
Search Subscribe
Members of @newswire/anaconda-mining-discovers-new-prospective-areas-at

TORONTO, Nov. 27, 2019 /CNW/ - Anaconda Mining Inc. ("Anaconda" or the "Company") (TSX: ANX) (OTCQX: ANXGF) is pleased to announce the initiation of trenching and drilling at key exploration targets at the Tilt Cove Gold Project ("Tilt Cove"), located within the Baie Verte Mining District in Newfoundland, approximately 45 kilometres by road from the Company's Pine Cove Mill (Exhibit A). Tilt Cove is a significant, recently consolidated land package encompassing the same geological trend as the past producing, high-grade Nugget Pond Mine, which had an average recovered grade of 9.85 g/t gold. Tilt Cove covers a 20-kilometre strike extent of the Betts Cove Complex, a highly prospective geological terrane including the Nugget Pond Horizon, the iron-rich sedimentary unit that hosts the past-producing Nugget Pond Mine (Exhibit A). 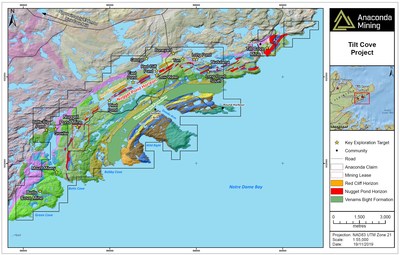 Since providing an update on September 5, 2019, Anaconda has received final results from a LiDAR survey over the entire area, detailed drone magnetic survey (453 line-kilometres) covering the Nugget Pond Horizon and assays from all soil (2,335) samples and prospecting (1,045) samples. From these data sets the following advances have been made:

"Based on data from our recent comprehensive exploration evaluation program, combined with historical data, we have identified exciting new opportunities for discovery at the Tilt Cove Gold Project and have initiated trenching programs and drill testing of these targets. The identification of the Red Cliff Horizon parallel with the Nugget Pond Horizon over a six-kilometre strike means there are now two potential host rocks for Nugget Pond-style gold mineralization in this area. We have also discovered the Growler Showing, which bares similarities to Nugget Pond-style gold mineralization and is located in the immediate hanging wall of a large-scale fault system and acquired another property hosting the Betts Big Pond Showing. The Growler Showing is currently being tested through trenching and drilling, with drilling at the West Pond and Red Cliff Pond targets to follow. We expect to complete these initial trenching and drilling programs by the end of the year and anticipate commencing a second phase of drilling at Tilt Cove in the new year."

The Betts Big Pond Showing is located 1.9 kilometres west of the Nugget Pond Mine and 700 metres west of the Growler Showing. The Betts Big Pond Showing is hosted in a similar setting to the Nugget Pond Mine but near a faulted contact with younger Silurian Intrusive rocks of the Cape Brule Porphyry. Alteration comprises disseminated pyrite and associated quartz veins. Historic grab sampling completed in 1987 includes assays up to 60.66 g/t gold and chip sampling in 2017 across the exposed zone assaying 8.18 g/t gold over 2.3 m (true width unknown). Due diligence re-sampling by Anaconda yielded grab samples assaying up to 3.36 g/t gold.

All "non-historic" samples quoted in this release were analyzed at Eastern Analytical Ltd. in Springdale, NL, for Au by fire assay (30 g) with an AA finish.

Composited assays from historical drill core are compiled from historic reports and data filed with the Department of Natural Resources, Newfoundland and Labrador. Sufficient work has not been completed by Anaconda geologists and QPs to verify the validity of these composited assays.

This news release contains "forward-looking information" within the meaning of applicable Canadian and United States securities legislation. Generally, forward-looking information can be identified by the use of forward-looking terminology such as "plans", "expects", or "does not expect", "is expected", "budget", "scheduled", "estimates", "forecasts", "intends", "anticipates", or "does not anticipate", or "believes" or variations of such words and phrases or state that certain actions, events or results "may", "could", "would", "might", or "will be taken", "occur", or "be achieved". Forward-looking information is based on the opinions and estimates of management at the date the information is made, and is based on a number of assumptions and is subject to known and unknown risks, uncertainties and other factors that may cause the actual results, level of activity, performance or achievements of Anaconda to be materially different from those expressed or implied by such forward-looking information, including risks associated with the exploration, development and mining such as economic factors as they effect exploration, future commodity prices, changes in foreign exchange and interest rates, actual results of current production, development and exploration activities, government regulation, political or economic developments, environmental risks, permitting timelines, capital expenditures, operating or technical difficulties in connection with development activities, employee relations, the speculative nature of gold exploration and development, including the risks of diminishing quantities of grades of resources, contests over title to properties, and changes in project parameters as plans continue to be refined as well as those risk factors discussed in Anaconda's annual information form for the year ended December 31, 2018, available on www.sedar.com. Although Anaconda has attempted to identify important factors that could cause actual results to differ materially from those contained in forward-looking information, there may be other factors that cause results not to be as anticipated, estimated or intended. There can be no assurance that such information will prove to be accurate, as actual results and future events could differ materially from those anticipated in such information. Accordingly, readers should not place undue reliance on forward-looking information. Anaconda does not undertake to update any forward-looking information, except in accordance with applicable securities laws. 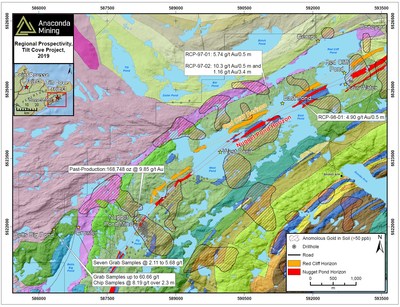