Use of this site indicates acceptance of the Privacy Policy and Terms of Use.
The information on this Website is not reliable and not intended to provide tax, legal, or investment advice. Nothing contained on the Website shall be considered a recommendation, solicitation, or offer to buy or sell a security to any person in any jurisdiction.
CEO.CA members discuss high-risk penny stocks which can lose their entire value. Only risk what you can afford to lose.
© 2021 - CEO.CA Technologies Ltd.
@newswire/anaconda-mining-expands-its-great-northern-project ↻
0 online
Today This week
Search Subscribe
Members of @newswire/anaconda-mining-expands-its-great-northern-project

by @newswire on 29 Jan 2018, 07:00
Anaconda Mining Expands its Great Northern Project With the Acquisition of the Rattling Brook Deposit

TORONTO, Jan. 29, 2018 /CNW/ - Anaconda Mining Inc. ("Anaconda" or "Company") (ANX: TSX) is pleased to announce it has acquired the Rattling Brook Deposit ("Rattling Brook" or the "Property"), in northwest Newfoundland, pursuant to an acquisition agreement between Anaconda and Kermode Resources Ltd. ("Kermode") dated January 25, 2018 (the "Agreement"). Under the Agreement, the Company has acquired a mineral license that hosts the Rattling Brook Deposit containing an Historic Resource Estimate^ with an Inferred Resource of 495,000 ounces** within 425 hectares of property and is contiguous with Anaconda's existing land holdings in the immediate area.

The acquisition of Rattling Brook and the surrounding property consolidates Anaconda's prospective land position in the Northern Peninsula, which also includes the Thor Deposit, located approximately 20 kilometres south of Rattling Brook along strike. The Thor Deposit* contains an Indicated Resource of 83,000 ounces and an Inferred Resource of 31,000 ounces. Anaconda has amassed, on the Northern Peninsula, two deposits, a land position of nearly 10,000 hectares, numerous prospects and associated prospective geology, all collectively referred to as the Great Northern Project ("Great Northern") (Exhibit A).

Highlights of the Great Northern Project

The Great Northern Project is a sizeable exploration package of highly prospective targets in an under-explored area, underpinned by two existing gold deposits. Based on historic data and Anaconda's own exploration work, the Company believes there is a potential to expand the known Mineral Resources and discover more throughout its project area.

With continued focus on the development of the high-grade Goldboro Gold Project, in Nova Scotia, and extending the mine life at the Point Rousse mine operation in Newfoundland, the Company is reviewing strategic options to maximize the value of its highly prospective exploration stage Great Northern Project. With the addition of Rattling Brook, Anaconda has strengthened its Great Northern portfolio to drive maximum value for the entire project area.

The Agreement
Pursuant to the Agreement, Anaconda paid Kermode an initial cash payment of $25,000 and issued Kermode $500,000 of Anaconda common shares, equal to 1,113,218 common shares based on a twenty-day volume weighted average trading price ending as of January 24, 2018.  Anaconda will also pay Kermode an additional cash payment of $25,000 on February 26, 2018.  The Consideration Shares are subject to a hold period which will expire on May 27, 2016 in accordance with the rules and policies of the Toronto Stock Exchange and applicable Canadian securities laws and are also subject to further transfer restriction pursuant to the terms of the Agreement.

About Resources and Technical Reports

Anaconda is a TSX-listed gold mining, exploration and development company, focused in the prospective Atlantic Canadian jurisdictions of Newfoundland and Nova Scotia. The Company operates the Point Rousse Project located in the Baie Verte Mining District in Newfoundland, comprised of the Pine Cove open pit mine, the fully-permitted Pine Cove Mill and tailings facility, the Stog'er Tight and Argyle deposits, and approximately 5,800 hectares of prospective gold-bearing property. Anaconda is also developing the recently acquired Goldboro Project in Nova Scotia, a high-grade Mineral Resource, with the potential to leverage existing infrastructure at the Company's Point Rousse Project.

The Company also has a pipeline of organic growth opportunities, including the Great Northern Project on the Northern Peninsula and the Tilt Cove Property on the Baie Verte Peninsula.

This news release contains "forward-looking information" within the meaning of applicable Canadian and United States securities legislation including, but not limited to, the Company's future plans with respect to the Great Northern Project. Generally, forward-looking information can be identified by the use of forward-looking terminology such as "plans", "expects", or "does not expect", "is expected", "budget", "scheduled", "estimates", "forecasts", "intends", "anticipates", or "does not anticipate", or "believes" or variations of such words and phrases or state that certain actions, events or results "may", "could", "would", "might", or "will be taken", "occur", or "be achieved". Forward-looking information is based on the opinions and estimates of management at the date the information is made, and is based on a number of assumptions and is subject to known and unknown risks, uncertainties and other factors that may cause the actual results, level of activity, performance or achievements of Anaconda to be materially different from those expressed or implied by such forward-looking information, including risks associated with the exploration, development and mining such as economic factors as they effect exploration, future commodity prices, changes in foreign exchange and interest rates, actual results of current production, development and exploration activities, government regulation, political or economic developments, environmental risks, permitting timelines, capital expenditures, operating or technical difficulties in connection with development activities, employee relations, the speculative nature of gold exploration and development, including the risks of diminishing quantities of grades of resources, contests over title to properties, and changes in project parameters as plans continue to be refined as well as those risk factors discussed in Anaconda's annual information form for the year ended May 31, 2017, available on www.sedar.com. Although Anaconda has attempted to identify important factors that could cause actual results to differ materially from those contained in forward-looking information, there may be other factors that cause results not to be as anticipated, estimated or intended. There can be no assurance that such information will prove to be accurate, as actual results and future events could differ materially from those anticipated in such information. Accordingly, readers should not place undue reliance on forward-looking information. Anaconda does not undertake to update any forward-looking information, except in accordance with applicable securities laws. 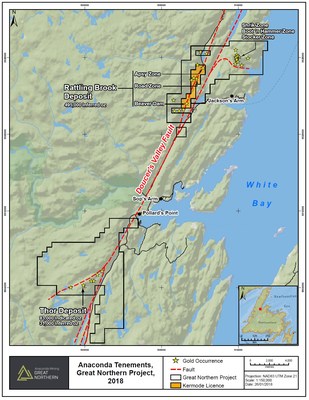