Use of this site indicates acceptance of the Privacy Policy and Terms of Use.
The information on this Website is not reliable and not intended to provide tax, legal, or investment advice. Nothing contained on the Website shall be considered a recommendation, solicitation, or offer to buy or sell a security to any person in any jurisdiction.
CEO.CA members discuss high-risk penny stocks which can lose their entire value. Only risk what you can afford to lose.
© 2021 - CEO.CA Technologies Ltd.
@newswire/callinex-intersects-755m-of-501-copper-eq-in-257m ↻
0 online
Today This week
Search Subscribe
Members of @newswire/callinex-intersects-755m-of-501-copper-eq-in-257m

VANCOUVER, BC, April 26, 2021 /CNW/ - Callinex Mines Inc. (the "Company" or "Callinex") (TSXV: CNX) (OTC: CLLXF) is pleased to announce that it has more than doubled the vertical extent of the Rainbow Deposit (the "Rainbow") by extending the high-grade copper, gold, silver and zinc deposit 257m closer to surface. The Rainbow is located at the 100% owned Pine Bay Project within a mineral lease, less than 250m from a high-voltage hydroelectric power-line and 550m from a historic shaft with direct road access to processing facilities in Flin Flon, MB (Pine Bay Plan View). 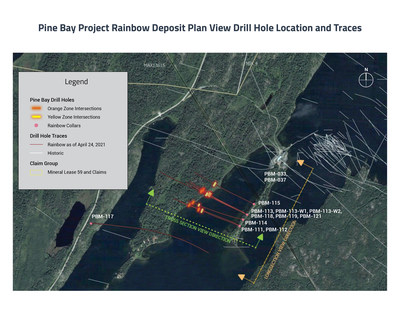 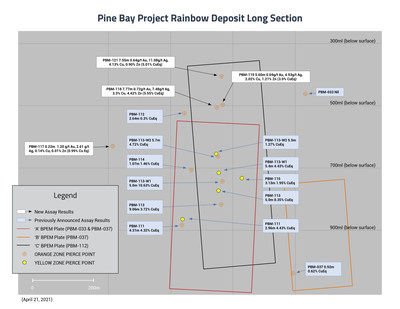 Max Porterfield, President and CEO, stated, "We are excited to see the Rainbow expand closer to surface with the high-grade copper intersections announced today." Mr. Porterfield continued, "The Rainbow Deposit has the potential to be accessible by a ramp which in turn would translate to a more attractive development plan."

Currently, two rigs continue operating to expand the Rainbow closer to surface and at depth. Since the Company resumed drilling in mid February, 9 holes have been completed (3 holes abandoned) for a total of 7,600 meters out of a 30,000 meter budgeted drill program. Callinex will continue to provide results on an ongoing basis for the duration of the 2021 drilling campaign. 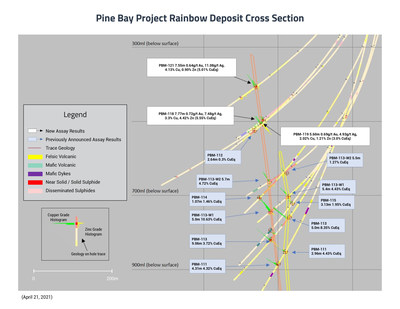 In addition, the Company has commenced two deep penetrating geophysical surveys along the trend that hosts the Rainbow and Sourdough deposits as well as the past producing Centennial Mine (Pine Bay Geophyiscal Grids). An induced polarization ("IP") survey is being completed by Abitibi Geophysics using their proprietary OreVision IP system, which can reveal targets at four times the depth of conventional IP. The Rainbow Deposit was discovered by utilizing the OreVision IP system as a critical vectoring tool. The objective of the survey is to detect pyrite-rich mineralization that may host high-grade copper and zinc up to depths of 580m along the favorable volcanogenic massive sulphide ("VMS") trend that hosts the known deposits. The 24 km IP Survey, currently underway, will span a linear 3.2 km north-south trend with line widths up to 1.4 km at 150m spacing.

Koop Geotechnical is in the process of completing a 13.4 line km deep penetrating surface pulse electromagnetic survey ("SPEM") that will cover an additional 10 km of the Rainbow trend to the south. 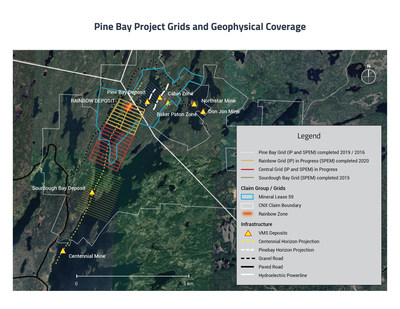 J.J. O'Donnell, P.Geo, a qualified person under National Instrument 43-101, has reviewed and approved the technical information in this news release.

QA / QC Protocols
Individual samples were labeled, placed in plastic sample bags, and sealed. Groups of samples were then placed in security sealed bags and shipped directly to SGS lab in Vancouver, BC for analysis. Samples were weighed then crushed to 75% passing 2mm and pulverized to 85% passing 75 microns in order to produce a 250g pulverized split. 35 elements including copper, zinc, lead and silver assays were determined by Aqua Regia digestion with a combination of ICP-MS and ICP-AES finish, with over limits rerun using an ore grade analysis (two acid digest ICP-AES).  Gold was analyzed by fire assay. Specific gravity (sg) measured for each sample using the pycnometer and water and air method. QA/QC included the insertion and continual monitoring of numerous standards, blanks, and duplicates.

Callinex Mines Inc. (TSXV: CNX) (OTC: CLLXF) is advancing its portfolio of base and precious metals rich deposits located in established Canadian mining jurisdictions. The portfolio is highlighted by the rapidly expanding Rainbow Discovery at its Pine Bay Project located near existing infrastructure in the Flin Flon Mining District. Additionally, Callinex has emerging near-surface silver discoveries at its Nash Creek Project located in the Bathurst Mining District of New Brunswick. A 2018 PEA on the Company's Bathurst projects outlined a mine plan that generates a strong economic return with a pre-tax IRR of 34.1% (25.2% post-tax) and NPV8% of $230 million ($128 million post-tax).

Some statements in this news release contain forward-looking information. These statements include, but are not limited to, statements with respect to future expenditures. These statements address future events and conditions and, as such, involve known and unknown risks, uncertainties and other factors which may cause the actual results, performance or achievements to be materially different from any future results, performance or achievements expressed or implied by the statements. Such factors include, among others, the ability to complete the proposed drill program and the timing and amount of expenditures. Except as required under applicable securities laws, Callinex does not assume the obligation to update any forward-looking statement.