Use of this site indicates acceptance of the Privacy Policy and Terms of Use.
The information on this Website is not reliable and not intended to provide tax, legal, or investment advice. Nothing contained on the Website shall be considered a recommendation, solicitation, or offer to buy or sell a security to any person in any jurisdiction.
CEO.CA members discuss high-risk penny stocks which can lose their entire value. Only risk what you can afford to lose.
© 2022 - CEO.CA Technologies Ltd.
@newswire/canada-please-welcome-the-mcdonalds-maccoin ↻
0 online
Today This week
Search Subscribe
Members of @newswire/canada-please-welcome-the-mcdonalds-maccoin

TORONTO, July 29, 2018 /CNW/ - To mark the 50th anniversary of the iconic Big Mac sandwich, McDonald's Canada is joining in a global celebration to launch the first fully food-backed global currency*: the MacCoin – yes, this is real life! 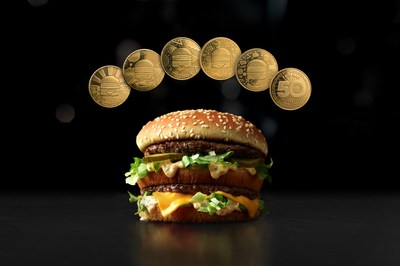 Beginning August 2, MacCoins will make their debut in Canada and in more than 50 countries globally. Each coin is redeemable for one Big Mac at participating restaurants around the world.

There will be 50,000 coins in Canada (wink wink, symbolizing 50 years of the iconic burger!). Canadians can get their hands on some of the limited edition coins by:

Coins are not being distributed with purchase in Canadian restaurants.

The MacCoin is drawing inspiration from The Economist's Big Mac Index – a measure of global purchasing power. Even the Royal Canadian Numismatic Association is joining the celebration calling the MacCoin a "collectible keepsake" (see below).

"As one of the most well-known and iconic McDonald's menu items – and business driver – around the globe and in Canada, the Big Mac deserves the celebration that the coin evokes," says Jeff McLean, Chief Financial Officer, McDonald's Canada. "The fact that in 50 years, the Big Mac has become so universally recognized it's used to measure the purchasing power of international currencies is pretty remarkable."

"The Big Mac is a cultural icon and what better way to celebrate its continuing status than to issue a commemorative coin" says Henry Nienhuis, President of the Royal Canadian Numismatic Association. "The many designs of the MacCoin reflect the incredible international network that comprises the McDonald's global system. We all know what the Big Mac is worth to us, but giving it its own limited mintage official celebratory coin, expands that worth giving us a collectible keepsake as well."

"When my great-grandfather Jim Delligatti invented the Big Mac at his grill in Uniontown, Pennsylvania, he just wanted to make his local customers happy," said Nick Delligatti, fourth-generation McDonald's owner-operator and great-grandson of Jim Delligatti, the inventor of the Big Mac. "August 2 would have been my great-grandfather's 100th birthday, and I believe he would be very proud knowing his humble sandwich has made such a lasting impression that people all around the world can enjoy it wherever they find a McDonald's."

About McDonald's Canada
In 1967, Canadians welcomed the first McDonald's restaurant to Richmond, British Columbia. Today, McDonald's Restaurants of Canada Limited has become part of the Canadian fabric, serving close to three million guests every day. Together McDonald's and our franchisees proudly employ nearly 100,000 people from coast-to-coast and more than 90 per cent of McDonald's 1,400 Canadian restaurants are locally owned and operated by independent entrepreneurs. Of the almost $1 billion we spend on food, beverages and packaging, more than 85 per cent is purchased from over 100 suppliers in Canada. For more information on McDonald's Canada visit McDonalds.ca.