Use of this site indicates acceptance of the Privacy Policy and Terms of Use.
The information on this Website is not reliable and not intended to provide tax, legal, or investment advice. Nothing contained on the Website shall be considered a recommendation, solicitation, or offer to buy or sell a security to any person in any jurisdiction.
CEO.CA members discuss high-risk penny stocks which can lose their entire value. Only risk what you can afford to lose.
© 2016 - Pacific Website Company Inc.
@newswire/cantex-announces-48-gold-and-base-metal-discoveries ↻
0 online
Today This week
Search Subscribe
Members of @newswire/cantex-announces-48-gold-and-base-metal-discoveries

by @newswire on 9 Jul 2020, 08:30
Cantex Announces 48 Gold and Base Metal Discoveries on North Rackla Claims in the Yukon 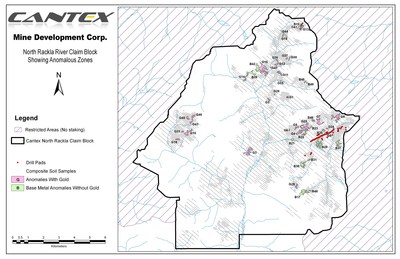 While the Company is working on defining drill targets for its massive sulphide drill program, which is expected to commence in early August, the Company has identified 48 new discoveries of gold and base metals.

Most of the anomalous drainages were initially soil-talus sampled on lines spaced 200 metres apart perpendicular to the dominant geologic trend.  Each sample is an approximately 1.5kg composite of soil and talus collected every 5 metres over a 25 metre interval.  The samples are sent to C.F. Mineral Research Ltd., a laboratory owned by Dr. Charles Fipke, where they are pulverized and prepared for analysis including the insertion of standards.  ALS Chemex conducts the analyses for 49 elements by ICP Mass Spectroscopy.

In anomalous areas the sampling density is increased; additional infill lines are completed on either 50 or 100 metre spacing.  To date, 24,658 soil-talus samples and 881 rock samples have been collected on the North Rackla claims.

This technique is effective where weathering does not break down siliceous rock, thereby not allowing gold and other metals to disperse into conventional -0.177mm (-80 mesh) soil only samples. The technique has been used to detect drill targets on the claims, including the discovery of the high grade massive sulphides in the Discovery and Extension Targets as situated in Map 1.

Some of the higher priority targets are as follows:

Anomaly G16 is a large (15.7 hectare) irregular anomaly roughly 640m long and 245m wide of weak to very strong anomalous gold frequently accompanied by weak to moderate zinc in soil-talus samples.  Several rock grab samples contained up to 39.6 g/t gold.  Other rock samples show values of up to 38.3% zinc, 368 g/t silver or 30.2% copper.  An additional 8 hectare anomaly (B42) of silver-lead-zinc occurs on the southwest border of the anomaly.

The 9.9 hectare anomaly B17 contains weak to strongly anomalous copper-lead-zinc-silver soil-talus samples.  The anomaly remains open to the southwest, where the next closest sample line is 1,100 metres away.  This line of samples is also anomalous in copper-lead-zinc-silver; infill sampling will be completed this year to determine whether Anomaly B17 continues all the way to this next anomalous sample line.

Anomaly G7 is an irregular 7.7 hectare area containing weak to strongly anomalous copper-lead-zinc-silver with local weak to moderately anomalous gold.  Four rock samples collected from the area analyzed 25 to 73ppb gold with up to 5.6% lead and 79 g/t silver.

The 10 hectare anomaly G8 contains weakly to strongly anomalous copper-lead-zinc-silver rarely with weakly anomalous gold in soil-talus.  Eleven rock grab samples collected from the area analyzed between 11 and 49 ppb gold, and up to 0.96% copper, 6.8% zinc, 1.2% lead and 80 g/t silver.

Anomaly G4 is a 13.4 hectare irregular area roughly 900 metres long and 150 metres wide of moderately to strongly anomalous copper-lead-zinc-silver with common weakly to moderately anomalous gold in soil-talus.  A rock sample collected within the anomaly analyzed 4.27% zinc, 0.54% copper, 0.61% lead, 318 g/t silver and 21ppb gold.  There are three similarly anomalous areas of 3.21, 1.2 and 0.87 hectares adjacent to G4.

Anomaly G11 consists of a 2.57 hectare southeast trending anomaly 400 metres in length and 65 metres in width and remains open to the south east.  Soil-talus is strongly to weakly anomalous in gold, arsenic, silver and zinc.  Ten rock grab samples collected from this anomaly are weakly to strongly anomalous in gold (up to 293ppb) and arsenic (up to 8,450ppm).  Three rock samples are anomalous in zinc (up to 30%) and silver (up to 327 g/t).

Defining Drill Targets
Most anomalies are not completely closed off and additional soil-talus sampling is needed to establish the exact dimensions of the anomalous areas.  The existing geochemical coverage has shown that the minimum sizes of the anomalies range from 15.7 hectares (~640m x 245m) down to 5 areas less than 0.4 hectares in size.  In addition to soil-talus sampling, field work in July will include prospecting, rock sampling and geologic mapping to prepare the highest priority areas for drill testing in 2020 or 2021.