Use of this site indicates acceptance of the Privacy Policy and Terms of Use.
The information on this Website is not reliable and not intended to provide tax, legal, or investment advice. Nothing contained on the Website shall be considered a recommendation, solicitation, or offer to buy or sell a security to any person in any jurisdiction.
CEO.CA members discuss high-risk penny stocks which can lose their entire value. Only risk what you can afford to lose.
© 2016 - Pacific Website Company Inc.
@newswire/cantex-discovers-new-gossan-at-north-rackla-expands ↻
0 online
Today This week
Search Subscribe
Members of @newswire/cantex-discovers-new-gossan-at-north-rackla-expands

KELOWNA, BC, Sept. 10, 2019 /CNW/ - Cantex Mine Development Corp. (CD: TSXV) (the "Company") has released an update on the work program at its Massive Sulphide project within its 100-per-cent-owned 14,077 hectare North Rackla claim block.

An airborne magnetic survey completed earlier this year has recently been processed and interpreted (Figure 1). The results of the survey have provided valuable insight in terms of correlating mapped surface exposures and drill results with geophysical trends for the first time. The survey shows a linear anomaly that correlates well with the mapped surface trace of the massive sulphide Main Zone and intercepts of the zone in drill core. Based on this geophysical interpretation, the massive sulphide Main Zone trend has expanded by one kilometre, to 3.4 kilometres, of total strike length.

An additional ~1 kilometre of prospective strike length has also been identified at the "New Gossan" South Zone, detailed further below. The South Zone shows similar geophysical character and is parallel to the Main Zone, which correlates well with its mapped 1,200 metre long exposure at surface. In total, there are now approximately 4.1 kilometres of strike length at North Rackla that are deemed to be prospective.

The survey also clearly defines a steeply dipping post-mineralization mafic dike swarm that cuts through the area running from Pads MZ7 to MZ13 (~300m of strike). This E-W trending mafic dike swarm intruded after the sulphides were emplaced and has digested and remobilized the zone in this segment, but the occurrence is localized. To that end, heavy massive sulphides have been logged at Pad MZ12, but are away from the mafic dikes. Additional drilling along the strike of the Main Zone to the northeast and southwest of the dikes has confirmed the presence of heavy massive sulphides as detailed in the Company's September 5, 2019 press release. The Main Zone continues to show predictable geometry and orientation and is consistently found along a stratigraphic boundary between argillite and dolostone.

Surface prospecting in the North Rackla claim block continues, with talus samples along a parallel trend to the northwest of the Main Zone showing anomalous geochemistry. This trend will be followed up on in due course. 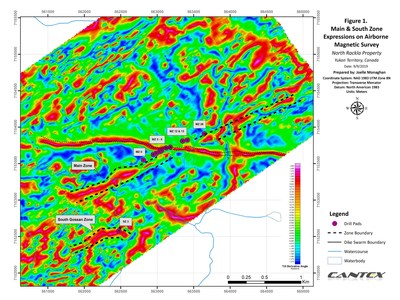 Prospecting and sampling carried out 1 kilometre south of the Main Zone has resulted in the discovery of a new exposure of outcropping massive gossan (weathered sulphides). This steeply dipping gossan has been traced for 1,200 metres along surface and down 320 metres of elevation, with exposed apparent widths at surface ranging from 2 to 20 metres.  As discussed above, the exposure of the zone correlates well with a linear feature that can be traced for over 1 kilometre of strike length on the recently interpreted magnetic survey. The geophysical character of this zone is comparable to that of the Main Zone.

Assays of grab samples taken from this gossan have returned significantly elevated zinc and manganese levels (up to 12.35% Zn and up to 5.82% Mn), which are also key geochemical markers seen at the Main Zone. The location of this new South Zone in relation to the Main Zone is shown in Figure 1, attached to this press release. The high manganese values are unique to the massive sulphides of the Main Zone in the area and are believed to be indicative of a basinal sedex environment.

In light of the geophysical results and outcropping massive gossan at surface, one drill rig was recently mobilized to the new South Zone target where drilling is underway, targeting the down-dip extension of the gossan.

Full assay data from the first 2,648 metres of assayed drill core (first released on September 5, 2019) is included below and should be reviewed in conjunction with the figures within this release and on the Company's website (www.cantex.ca/yukon). The drill results are presented and summarized in Table 1.

Pads MZ7 and MZ8 are within the area affected by the mafic dike swarm discussed above and were spotted and drilled before the results of the airborne magnetic survey were received.

As previously reported (September 5, 2019), heavy massive sulphides have been logged in two fans of five drill holes (all ten holes) from each of Pad MZ3 and Pad MZ4, as well as a fan of four holes from Pad MZ26. Pads are not drilled in numerical order and drilling is ongoing; both along strike (ENE and WSW) and down dip within the Main Zone where the zone has thus far been intersected down to 335 metres vertical depth. Additional drill pads are being built to support drilling further down dip. Drill pads with summer-only access are being prioritized while pads on flatter ground will be drilled later in the season.

Cantex is highly encouraged by the results to date at North Rackla where the recently interpreted magnetic survey has allowed the Company to correlate drill core and outcrop to geophysical character for the first time, while extending the mapped prospective strike length in areas without surface exposure. With more than 4 kilometres of mapped prospective strike length now identified at North Rackla, drilling is continuing to encounter massive sulphides in the Main Zone in both directions along strike and at depth along an argillite-dolostone contact.

Two drills are currently focused on the southwest portion of the Main Zone while the third is testing the newly discovered South Zone.  With 68 holes and over 15,500 metres drilled to date, Cantex looks forward to providing additional assays and operational updates from its ongoing exploration and delineation program in the near future.

In light of the good drilling productivity seen to date, it is expected that the company will expand its drill program beyond the initially planned 17,000 metres of drilling during 2019.