Use of this site indicates acceptance of the Privacy Policy and Terms of Use.
The information on this Website is not reliable and not intended to provide tax, legal, or investment advice. Nothing contained on the Website shall be considered a recommendation, solicitation, or offer to buy or sell a security to any person in any jurisdiction.
CEO.CA members discuss high-risk penny stocks which can lose their entire value. Only risk what you can afford to lose.
© 2016 - Pacific Website Company Inc.
@newswire/drilling-confirms-discovery-of-a-high-grade-gold-epithermal ↻
0 online
Today This week
Search Subscribe
Members of @newswire/drilling-confirms-discovery-of-a-high-grade-gold-epithermal

by @newswire on 29 Apr 2020, 08:30
Drilling Confirms Discovery of a High-Grade Gold Epithermal System at Shot Rock

OTTAWA, April 29, 2020 /CNW/ - Northern Shield Resources Inc. ("Northern Shield" or the "Company") (TSXV: NRN) is pleased to announce that all drill core assays from the inaugural drilling program at the Shot Rock Property ("Shot Rock" or the "Property") in Nova Scotia have been received and include high-grade gold intercepts of up to 22 g/t Au, the highest gold grades to date from Shot Rock. Northern Shield can earn up to an 80% interest in Shot Rock. The Property is being explored for low sulphidation epithermal (LSE) gold mineralization. 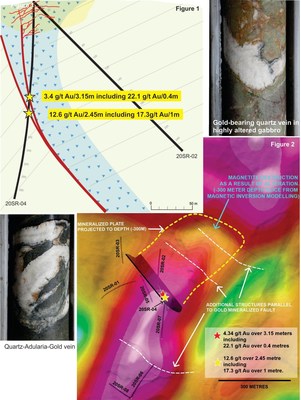 Eight drill-holes, totalling approximately 2,189 metres, have been completed at the Highway Zone (see Figure 1) with the purpose of determining the geometry of the system, identifying which structures are gold bearing and validating the LSE model that gold grades increase significantly as a function of depth in the boiling zone.

The orientation of the gold-bearing structures, which was previously uncertain due to very limited surface exposure, is now also better understood. This will greatly assist in the targeting of follow-up drill holes. Specifically, valuable insight was gained from the robust and distinct halos of pathfinder elements associated with the gold mineralization (see below for details). The Company believes that it has now isolated the structures that host the gold mineralization and has a much better understanding of the camp-scale regional features (see below for details) that influenced the location of the LSE gold system centred on the Highway Zone. This breakthrough delivers the geological opportunity that supports a large-scale and productive LSE gold system so the Company can now move forward confidently with further drilling.

Phase 2 Drill Targets - Highway Zone
Drill core observations show that the alteration associated with the mineralization unequivocally causes a reduction in the magnetic signature of the host rocks. An area of distinctly lower magnetic signature is apparent from the airborne magnetic survey and coincides with the projected continuation of the gold mineralization intersected in drill-hole 20SR-04. (see Figure 2). This feature will be a high-priority target in the follow-up drilling program currently being planned. Other priority targets will include two other faults which are well defined on both the airborne magnetic survey and Lidar imagery, and are parallel to the gold-bearing structure intersected in drill hole 20SR-04.

"We are delighted to see high grades from the inaugural drilling program at Shot Rock. The rapid increase in gold grade over a vertical distance of only 100 metres is impressive and consistent with LSE gold systems. Combined with the structural and pathfinder elements compilation, the high gold assays from the drilling program now provide a very compelling picture of a large and productive LSE system. The Company now feels it can move forward confidently, following-up on the higher grades and the correct structures, which we believe will quickly and significantly expand the gold bearing zones."

Technical Aspects - Pathfinders
Surface sampling over the past few years has defined a suite of pathfinder elements often associated with the LSE gold mineralization. Drilling has confirmed and refined the nature of these pathfinder halos around the gold mineralized structures and provides a very useful tool to guide drilling and further surface sampling (see presentation on website). Specifically, barium (Ba) forms the most extensive halo followed inward by elements such as antimony (Sb). In all cases, the pathfinder elements penetrate much further into the hanging wall (above the fault), than the footwall. Molybdenum (Mo) appears to be constrained to the centre of main gold-bearing structures.

These pathfinders serve two important purposes: firstly, they identify structures on surface that are related to the gold mineralization, providing an outline of the overall LSE gold system and targets for further drilling; secondly, on a drill-scale, they provide excellent vectors towards the mineralized structures. The signature of drill hole 20SR-02, for instance, indicates that its position is above and very proximal to the gold-bearing vein system intersected in hole 20SR-04.

Technical Aspects – Pull Apart Structure
The integration of structural and geochemical data gathered from the drilling program, together with data from surface work completed by Northern Shield since 2017, suggests that the Highway Zone may be at the centre of a pull-apart structure. Such structures result in zones of dilatancy that are then easily infiltrated by gold-bearing fluids rising from depth, providing the ideal geological environment for the formation of large quartz veins in low sulphidation systems (see presentation on website). On a camp-scale, the bounds of the interpreted pull-apart structure are largely coincident with samples anomalous in gold and/or pathfinder elements (see presentation on website).

The drilling program was contracted to Logan Drilling Group based in Stewiacke, Nova Scotia, and was overseen by Christine Vaillancourt, P. Geo., the Company's Chief Geologist and a Qualified Person under National Instrument 43-101. Samples from the program were analyzed by ALS Global in Sudbury, Ontario and in Vancouver, BC, for Au by Fire Assay with ICP-AES finish and base metals by four acid digestion and ICP-AES. All standards, blanks and duplicates meet targeted values.

This news release contains statements concerning the exploration plans, results and potential for epithermal gold deposits, and other mineralization at the Company's Nova Scotia property, geological, and geometrical analyses of the properties and comparisons of the properties to known epithermal gold deposits and other expectations, plans, goals, objectives, assumptions, information or statements about future, conditions, results of exploration or performance that may constitute forward-looking statements or information under applicable securities legislation.  Such forward-looking statements or information are based on a number of assumptions, which may prove to be incorrect. 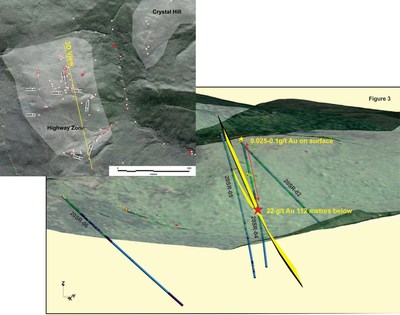