Use of this site indicates acceptance of the Privacy Policy and Terms of Use.
The information on this Website is not reliable and not intended to provide tax, legal, or investment advice. Nothing contained on the Website shall be considered a recommendation, solicitation, or offer to buy or sell a security to any person in any jurisdiction.
CEO.CA members discuss high-risk penny stocks which can lose their entire value. Only risk what you can afford to lose.
© 2021 - CEO.CA Technologies Ltd.
@newswire/e79-resources-completes-a-detailed-in-fill-soil-sampling ↻
0 online
Today This week
Search Subscribe
Members of @newswire/e79-resources-completes-a-detailed-in-fill-soil-sampling

VANCOUVER, BC, Jan. 12, 2021 /CNW/ - E79 Resources Corp. (CSE: ESNR) ("E79" or the "Company") is pleased to report that it has completed the first round of in-fill soil sampling over the high priority target areas on the Beaufort Project in Victoria. In-fill sampling was conducted on a 25m x 25m grid, designed to test both the north–northwest and east–west anomalous trends defined by the previously reported soil geochemistry program. The in-fill survey is focused on the intersection of the two anomalous trends. This in-fill program will help guide E79's initial drilling campaign at Beaufort and determine optimal sample spacing to be employed on the extensions to the soil grid over the remainder of the 20km structural trend.

Rory Quinn, E79's President and Chief Executive Officer stated, "We are confident that off the back of this in-fill survey the Company will be able to start sighting our initial drill collars on this exciting multi-element trend. We are proving that these cost-effective geochemical surveys allow us to narrow in on very precise target areas and we look forward to generating further drill targets as we expand upon the soil grids at Beaufort."

In December, an in-fill soil sampling program (Figure 2) started within the completed central soil grid to increase the resolution of the anomalies and to assist in defining maiden drill targets. The focus of the in-fill sampling are the well-defined gold-arsenic-antimony anomalies identified on the 100m x 100m soil grid completed earlier in 2020. Those defined anomalies are coincident and aligned with a pyritic shale unit and its intersection with a northeast-trending fault. In-fill sampling will extend along both linear trends.

Approximately 550 samples from the top of bedrock at depths of up to 2m were collected for analysis of the clay fraction for a multi-element suite and gold by an Aqua Regia digestion followed by analysis by inductively coupled plasma mass spectrometry (ICP-MS). Sampling is completed and the samples are currently on the way to a laboratory in Western Australia. Final analytical results are expected mid-February. Data quality will be assessed through the use of a comprehensive QA/QC program involving the use of field duplicates and certified reference materials.

Soil sampling on a 100m x 100m grid, similar to that used on the central soil grid area, is scheduled for both the proposed southern and northern soil grid areas (Figure 1) in the first quarter of 2021. These surveys cover areas of state-owned Crown Land along the main NW-trending structural trend which is spatially associated with the inferred source of a majority of the historical alluvial gold mining activity. Further in-fill sampling on these soil grids is anticipated once analytical results are received and will be used to generate further drill targets at Beaufort. 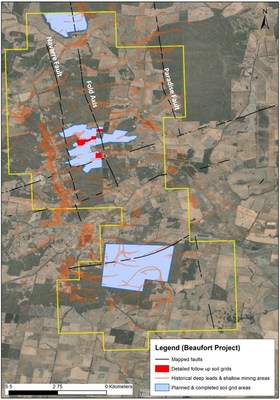 Figure 1 - location of Central block and the target areas where in-fill surveys were completed and the location of the  North & South Blocks which will be the focus of future work. Notably, the 2km long anomaly which has been defined on the central block sits within a much larger mineralised trend (over 18km strike), which has the potential to host a large gold system. 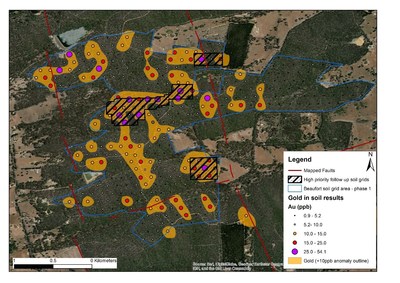 Figure 2 – location of the infill sampling grids over the central block. The in-fill grid is centered over the highest gold responses from the orientation survey and where those gold anomalies were associated with anomalous Arsenic and Antimony coincident with a NW-trending pyritic shale unit.

Dennis Arne, MAIG (RPGeo), PGeo (British Columbia), a "Qualified Person" as defined by National Instrument 43-101, has read and approved all technical and scientific information contained in this news release. Dr. Arne is the owner of Telemark Geosciences Pty Ltd, a geological consulting services company based in Victoria, Australia, and is Director of Exploration for E79 Resources.

E79 Resources is focused on exploring for Fosterville-type mineralization at its Beaufort and Myrtleford properties in the Victorian Goldfields, Australia. At Beaufort, an opportunity exists to explore for a hard rock source of a major alluvial goldfield along a structure that is known to host gold in the region. The Myrtleford property represents the consolidation of an entire historic gold camp with over 70 past producing gold mines on the property, where the bulk of historic mining stopped at the water table. The Company continues to evaluate corporate development opportunities in the underexplored and prolific Victorian Goldfields.