Use of this site indicates acceptance of the Privacy Policy and Terms of Use.
The information on this Website is not reliable and not intended to provide tax, legal, or investment advice. Nothing contained on the Website shall be considered a recommendation, solicitation, or offer to buy or sell a security to any person in any jurisdiction.
CEO.CA members discuss high-risk penny stocks which can lose their entire value. Only risk what you can afford to lose.
© 2016 - Pacific Website Company Inc.
@newswire/excellon-options-silver-city-project-from-globex ↻
0 online
Today This week
Search Subscribe
Members of @newswire/excellon-options-silver-city-project-from-globex

TORONTO, Sept. 24, 2019 /CNW/ - Excellon Resources Inc. (TSX:EXN, EXN.WT, OTC:EXLLF and FRA:E4X1) ("Excellon" or the "Company") is pleased to announce that it has entered into an agreement (the "Agreement") with Globex Mining Enterprises Inc. (TSX:GMX, OTCQX:GLBXF and FRA:G1MN) ("Globex") for the option (the "Option") to acquire a 100% interest in the Silver City Project (the Bräunsdorf exploration license), a 164 km2 silver district in Saxony, Germany. The Silver City Project is located within a large, high-grade epithermal system and has a long history of mining dating back to the 12th century, with no modern exploration for precious metals.

Highlights of the Silver City Project

"This low-risk, low-cost option gives us first mover advantage in a large high-grade epithermal silver district," stated Brendan Cahill, President and CEO. "With historic, high-grade mines seldom reaching depths of 200 metres, Silver City may be akin to turning the clock back 100 years on the Fresnillo trend. This opportunity aligns perfectly with our focus on exploring large, underexplored properties for high-grade discoveries on world-class precious metal belts."

Mr. Cahill continued, "Exploration and mining are on the brink of a renaissance in Saxony and significant talent is readily available in the broader region. The Freiberg University of Mining and Technology, the world's oldest mining and metallurgy college, is within 10 km of the Silver City Project and is actively training geologists and metallurgists, while the Helmholtz Institute Freiberg is developing high technology solutions for the mining industry in Germany and globally."

The Silver City Project encompasses a 36 km SW-NE strike by 1 to 5 km wide epithermal vein system situated west of the city of Freiberg (30 km southwest of Dresden). The immediate exploration license and surrounding area have a long and rich history of silver mining with numerous historic mining camps, small mines and prospects, many of which have only been explored and/or mined to shallow depths seldom exceeding 200 metres below surface.

Similar to the gold rush in North America, the silver rush in Europe originated in the ore mountains of Saxony, which were the source of wealth and power for the Saxon monarchy. Mining continued from the 12th to the 19th century but ceased when Germany abandoned the silver standard after the Franco-Prussian war and as the depth of mining operations became difficult with the methods then being employed. Sporadic silver mining continued from the 1880's, but ultimately ceased in 1969 due to economic, political and technological limitations.

The district of Freiberg has excellent infrastructure and is home to the Freiberg University of Mining and Technology (TU Bergekademie Freiberg) (https://tu-freiberg.de/en/university/profile), the oldest university of mining and metallurgy in the world and the Helmholtz Institute Freiberg ("HIF") (https://www.hzdr.de/db/Cms?pNid=2423), which specializes in a broad array of innovative mining technologies. HIF was founded in 2011 by the federal government of Germany to align the country's rich mineral history with a new national strategy on raw materials. 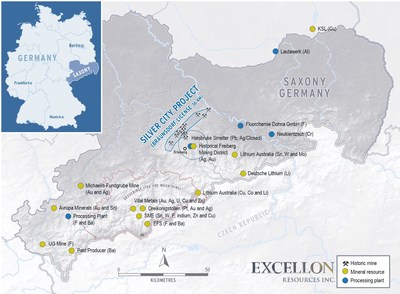 The Bräunsdorf project is located in the Freiberg district on the western edge of the Erzgiberge terrain. This terrain is an erosional window of Variscan basement rocks exposed due to uplifting of the terrain during the Cenozoic period.  A large number of hydrothermal veins have been emplaced into this terrain. These veins are typically sub-vertical and host predominantly silver and base metal rich deposits associated with Permian magmatic activity. In the Bräunsdorf district in particular, polymetallic veins are hosted within mica schist units, parallel to the tectonic contacts along a gneiss unit.

There are currently a number of underground mines and projects active in Germany mining primarily industrial metals. Saxony is considered the most mining friendly state in Germany due to its transparent and collaborative mining law process, with no holding costs on exploration concessions as long as work is advanced. Exploration licenses are eligible for 5-year terms and can be renewed or converted to production licenses during the term or at the anniversary. Both the Saxon and German governments are proactively attracting mining investment and research through affiliations with several technology and mining institutes.

Under the terms of the Agreement, to exercise the Option and earn a 100% interest in the Silver City Project, the Company must:

The total value of cash and share over the three-year term is C$500,000 and C$1.6 million, respectively. The Company may accelerate any of the payments, issuances or the royalty grant at any time during the term of the option. Additionally, the Company may terminate the option at any time provided that the payments and issuances described in (i) and (ii), above, have been completed and the work commitments under the exploration license in respect of the first year of the option have been satisfied.

The listing of the common shares issuable to Globex pursuant to the Agreement has been conditionally approved by the Toronto Stock Exchange.

Mr. Ben Pullinger, P. Geo., Senior Vice President Geology, has acted as the Qualified Person, as defined in NI 43-101, with respect to the disclosure of the scientific and technical information relating to exploration results contained in this press release.

Excellon's 100%-owned Platosa Mine has been Mexico's highest-grade silver mine since production commenced in 2005. The Company is focused on optimizing Platosa's cost and production profile, discovering further high-grade silver and carbonate replacement deposit (CRD) mineralization on the 21,000 hectare Platosa Project and epithermal silver mineralization on the 100%-owned 45,000 hectare Evolución Property, and capitalizing on current market conditions by acquiring undervalued projects in the Americas. The Company also holds an option on the 164 km2 Silver City Project in Saxony, Germany, a high-grade epithermal silver district with 750 years of mining history and no modern exploration.

Additional details on the Platosa Mine and the rest of Excellon's exploration properties are available at www.excellonresources.com.

The Toronto Stock Exchange has not reviewed and does not accept responsibility for the adequacy or accuracy of the content of this Press Release, which has been prepared by management. This press release contains forward-looking statements within the meaning of Section 27A of the Securities Act and Section 27E of the Exchange Act. Such statements include, without limitation, statements regarding the future results of operations, performance and achievements of the Company, including potential property acquisitions, the timing, content, cost and results of proposed work programs, the discovery and delineation of mineral deposits/resources/reserves, geological interpretations, proposed production rates, potential mineral recovery processes and rates, business and financing plans, business trends and future operating revenues. Although the Company believes that such statements are reasonable, it can give no assurance that such expectations will prove to be correct. Forward-looking statements are typically identified by words such as: believe, expect, anticipate, intend, estimate, postulate and similar expressions, or are those, which, by their nature, refer to future events. The Company cautions investors that any forward-looking statements by the Company are not guarantees of future results or performance, and that actual results may differ materially from those in forward looking statements as a result of various factors, including, but not limited to, variations in the nature, quality and quantity of any mineral deposits that may be located, significant downward variations in the market price of any minerals produced, the Company's inability to obtain any necessary permits, consents or authorizations required for its activities, to produce minerals from its properties successfully or profitably, to continue its projected growth, to raise the necessary capital or to be fully able to implement its business strategies. All of the Company's public disclosure filings may be accessed via www.sedar.com and readers are urged to review these materials, including the technical reports filed with respect to the Company's mineral properties, and particularly the September 7, 2018 NI 43-101 technical report prepared by SRK Consulting (Canada) Inc. with respect to the Platosa Property. This press release is not, and is not to be construed in any way as, an offer to buy or sell securities in the United States.