Use of this site indicates acceptance of the Privacy Policy and Terms of Use.
The information on this Website is not reliable and not intended to provide tax, legal, or investment advice. Nothing contained on the Website shall be considered a recommendation, solicitation, or offer to buy or sell a security to any person in any jurisdiction.
CEO.CA members discuss high-risk penny stocks which can lose their entire value. Only risk what you can afford to lose.
© 2021 - CEO.CA Technologies Ltd.
@newswire/exro-employees-move-into-us-headquarters-in-mesa-arizona ↻
0 online
Today This week
Search Subscribe
Members of @newswire/exro-employees-move-into-us-headquarters-in-mesa-arizona

CALGARY, AB, Nov. 23, 2021 /CNW/ - Exro Technologies Inc. (TSX: EXRO) (OTCQB: EXROF) (the "Company" or "Exro"), a leading clean technology company that has developed a new class of power electronics for electric motors and batteries, announced today that the Company employees have moved into its U.S. headquarters in Mesa, Arizona. Since Exro first announced the location of its U.S. headquarters, at 7853 East Ray Road, the Company has brought in the first dozen employees who will open the doors in the Greater Phoenix region. Arizona is a leading state for cutting-edge research and development in mobility technology and, from the new location in Mesa, Exro will be able to enhance service to its U.S. partners and customers.

The plans for Exro's 15,000 square foot Arizona office include a research and development facility, an innovation center, and a robust engineering area from which the Company will continue product development and testing of the Coil Driver technology's ability to cost-effectively optimize and improve performance in electric motors. Exro will also develop and pilot its Energy Storage System from the same location. The new Mesa facility will be equipped with two electric motor dynamometers ("dyno") in the first quarter of 2022. This will triple Exro's testing capacity. Full facility completion is expected for the second quarter of 2022.

"Moving into our Mesa facility today marks another milestone for the company this year," said Sue Ozdemir, CEO of Exro. "With our doors officially open for business, we expect to increase our testing capacity and scale to meet the demand we're creating. We can't wait to welcome our partners, customers and shareholders to tour our state-of-the-art innovation and development facility early next year."

The news of Exro employees' move into its Mesa, Arizona office follows the Company's application to list on the Nasdaq, further demonstrating Exro's expansion plans to gain a global footing, increase visibility in the marketplace, diversify its shareholder base, and strengthen long-term shareholder value. With its U.S. headquarters now open, Exro plans to create 50 new jobs in 2022. 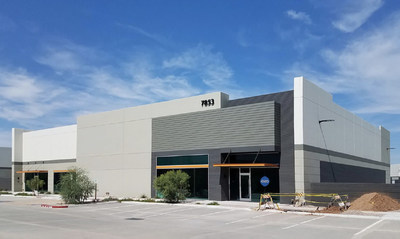