Use of this site indicates acceptance of the Privacy Policy and Terms of Use.
The information on this Website is not reliable and not intended to provide tax, legal, or investment advice. Nothing contained on the Website shall be considered a recommendation, solicitation, or offer to buy or sell a security to any person in any jurisdiction.
CEO.CA members discuss high-risk penny stocks which can lose their entire value. Only risk what you can afford to lose.
© 2022 - CEO.CA Technologies Ltd.
@newswire/filo-mining-reports-701m-at-113-cueq-extends-the ↻
0 online
Today This week
Search Subscribe
Members of @newswire/filo-mining-reports-701m-at-113-cueq-extends-the

VANCOUVER, BC, Aug. 23, 2022 /CNW/ - Filo Mining Corp. (TSX: FIL) (Nasdaq First North Growth Market: FIL) (OTCQX: FLMMF) ("Filo Mining", or the "Company") is excited to announce results from two holes at the Filo del Sol Project in San Juan, Argentina. Drillholes FSDH061 and FSDH063 have successfully extended the strike length of the Aurora Zone by 180m to a total of 1.6km, and it remains open to expansion in the north and south directions. Highlights and detailed results are shown below: View PDF version.

Commenting on the results, Jamie Beck, President, and CEO stated, "Hole 61 pulls the Aurora Zone another 180m northeast of Hole 57, which was our previous northernmost intersection in this zone of elevated grade. The Aurora Zone is completely open to the north beyond this hole, and now extends 1.6 km southwest to the intersection in Hole 63. As we ramp up drilling into the South American spring and summer, we will continue a combination of larger step-out holes to try to find the edges of the mineralized system, along with step-out and infill holes to try to fully define the size of this remarkable Aurora Zone."

FSDH061 was collared 230m to the northeast of FSDH057 and drilled to the west at an angle of -70o to a final depth of 1,093m where it was unable to continue due to technical problems. The hole cut the typical sequence of fragmental and coherent rhyolite country rock to a depth of 522m where it intersected the main mineralized breccia. The breccia is dominated by rhyolite clasts to a depth of 1,025m where it transitions to a granite-dominated breccia. The hole ended in well mineralized, potassic altered, homogeneous granite and granite breccia cut by moderately abundant A veins. The last 21m returned 1.03% CuEq (0.73% Cu, 0.38g/t Au, 2.8g/t Ag). Sparse, narrow, late-mineral porphyry dykes cut the sequence throughout, and scattered clasts of porphyry are common within the breccia.

FSDH063 intersected the resource block model down to a depth of 436m, with grades as predicted. The interval from 436m to 548m is interpreted as the Aurora Zone in this hole, ending at the contact with an intermineral porphyry which continues to 649m. The mineralized breccia continues below this, however, grades are diminished from the main interval and alteration is predominantly phyllic rather than silica and quartz-alunite as is seen further north.  Granite and associate breccias are intersected from 907m to the end of the hole.

Drilling was interrupted by an unusually harsh winter in the Andes, with uncharacteristically large snowfalls and strong winds occurring through several storms since late June. As always, we prioritize the safety of our personnel while maintaining operations. The weather has now improved, and drilling is currently underway with six diamond rigs on site, and six holes in progress. As the weather continues to moderate into spring and summer, we will be adding two brand new, state-of-the-art diamond rigs into the program in September which will allow us to drill even deeper at Filo del Sol. Our year-round operations planning sees the company drilling with up to 11 rigs, and this plan would see approximately 40,000m of drilling completed over the next 12 months.

Holes that have been completed with assays pending include:

Holes underway, with current depths, include:

Assay results for these holes will be released as they are received, analyzed and confirmed by the Company.

On behalf of Filo Mining,

The scientific and technical disclosure for the Filo del Sol Project included in this news release have been reviewed and approved by Bob Carmichael, B.A.Sc., P.Eng. who is the Qualified Person as defined by NI 43-101. Mr. Carmichael is Vice President, Exploration for the Company. Samples were cut at Filo Mining's operations base near the town of Guañizuil, Argentina by Company personnel. Diamond drill core was sampled in 2 metre intervals (except where shortened by geological contacts) using a rock saw for sulphide mineralization. Oxide mineralization was cut with a core splitter in order to prevent dissolution of water-soluble copper minerals during the wet sawing process. Core diameter is a mix of PQ, HQ and NQ depending on the depth of the drill hole. Samples were bagged and tagged and packaged for shipment by truck to the ALS preparation laboratory in Mendoza, Argentina where they were crushed and a 500g split was pulverized to 85% passing 200 mesh. The prepared samples were sent to the ALS assay laboratories in either Lima, Peru or Santiago, Chile for copper, gold and silver assays, and multi-element ICP and sequential copper analyses. ALS is an accredited laboratory which is independent of the Company. Gold assays were by fire assay fusion with AAS finish on a 30g sample. Copper and silver were assayed by atomic absorption following a 4 acid digestion. Samples were also analyzed for a suite of 36 elements with ICP-ES and a sequential copper leach analysis was completed on each sample with copper greater than 500ppm (0.05%). Copper and gold standards as well as blanks and duplicates (field, preparation and analysis) were randomly inserted into the sampling sequence for Quality Control. On average, 9% of the submitted samples are Quality Control samples. No data quality problems were indicated by the QA/QC program.

Mineralized zones within the Filo del Sol deposit are typically flat-lying, or bulk porphyry-style zones and drilled widths are interpreted to be very close to true widths.

Filo Mining is a Canadian exploration and development company focused on advancing its 100% owned Filo del Sol copper-gold-silver deposit located in Chile's Region III and adjacent San Juan Province, Argentina. The Company's shares are listed on the TSX and Nasdaq First North Growth Market under the trading symbol "FIL", and on the OTCQX under the symbol "FLMMF". Filo Mining is a member of the Lundin Group of Companies.

The information contained in this news release was accurate at the time of dissemination, but may be superseded by subsequent news release(s). The Company is under no obligation nor does it intend to update or revise the forward-looking information, whether as a result of new information, future events or otherwise.

This information was submitted by Filo Mining Corp. for publication, through the agency of the contact person set out below, on August 23, 2022 at 18:00 EDT. 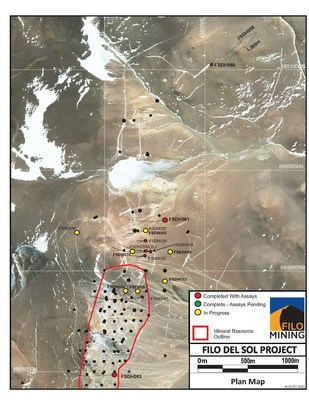 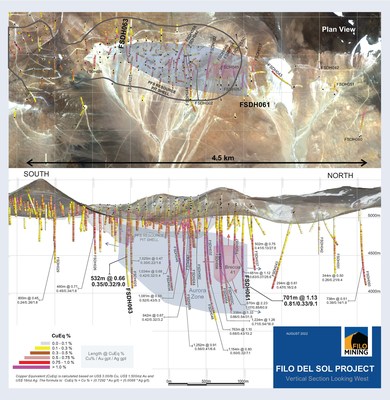 The Company believes that the expectations reflected in the forward-looking information included in this news release are reasonable but no assurance can be given that these expectations will prove to be correct and such forward-looking information should not be unduly relied upon.  Information contained in this news release is as of the date of this press release. In particular, this press release contains forward-looking information pertaining to assumptions made in the interpretation of drill results, geology, grade, geochemistry and continuity of mineral deposits; expectations regarding access and demand for equipment, skilled labour and services needed for exploration and development of mineral properties; and that activities will not be adversely disrupted or impeded by exploration, development, operating, regulatory, political, community, economic, environmental and/or healthy and safety risks. In addition, this news release may contain forward-looking statements or information pertaining to: potential exploration upside at the Filo del Sol Project, including the extent and significance of the porphyry copper-gold system underlying the current Mineral Resource and the prospectivity of exploration targets; exploration and development plans and expenditures, including a transition to year-round operations and the timing thereof; the ability of the Company's COVID-19 operating protocol to continue to meet government-mandated health and safety guidelines enabling it to conduct its field programs as planned; the success of future exploration activities; potential for resource expansion; ability to build shareholder value; expectations with regard to adding to its Mineral Reserves or Resources through exploration; expectations with respect to the conversion of inferred resources to an indicated resources classification; ability to execute planned work programs; plans or ability to add additional drill rigs; timing or anticipated results of an update to the mineral resource estimate for Filo del Sol; government regulation of mining activities; environmental risks; unanticipated reclamation expenses; title disputes or claims; limitations on insurance coverage; and other risks and uncertainties.

Statements relating to "mineral resources" are deemed to be forward-looking information, as they involve the implied assessment, based on certain estimates and assumptions that the mineral resources described can be profitably produced in the future.

The forward-looking statements contained in this news release are made as at the date of this news release and Filo does not undertake any obligations to publicly update and/or revise any of the included forward-looking statements, whether as a result of additional information, future events and/or otherwise, except as may be required by applicable securities laws. Forward-looking information is provided for the purpose of providing information about management's current expectations and plans and allowing investors and others to get a better understanding of the Company's operating environment. Forward-looking information is based on certain assumptions that the Company believes are reasonable, including that the current price of and demand for commodities will be sustained or will improve, the supply of commodities will remain stable, that the general business and economic conditions will not change in a material adverse manner, that financing will be available if and when needed on reasonable terms and that the Company will not experience any material labour dispute, accident, or failure of plant or equipment. These factors are not, and should not be construed as being, exhaustive. Although the Company has attempted to identify important factors that would cause actual results to differ materially from those contained in forward-looking information, there may be other factors that cause results not to be as anticipated, estimated, or intended. There can be no assurance that such statements will prove to be accurate, as actual results and future events could differ materially from those anticipated in such statements. All the forward-looking information contained in this document is qualified by these cautionary statements. Readers are cautioned not to place undue reliance on forward-looking information due to the inherent uncertainty thereof. 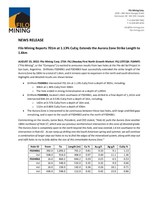