Use of this site indicates acceptance of the Privacy Policy and Terms of Use.
The information on this Website is not reliable and not intended to provide tax, legal, or investment advice. Nothing contained on the Website shall be considered a recommendation, solicitation, or offer to buy or sell a security to any person in any jurisdiction.
CEO.CA members discuss high-risk penny stocks which can lose their entire value. Only risk what you can afford to lose.
© 2021 - CEO.CA Technologies Ltd.
@newswire/first-cobalt-observes-canadas-national-day-for-truth ↻
0 online
Today This week
Search Subscribe
Members of @newswire/first-cobalt-observes-canadas-national-day-for-truth

TORONTO, Sept. 30, 2021 /CNW/ - As a symbol of respect and acknowledgement toward Canada's First Anniversary of the National Day for Truth and Reconciliation, First Cobalt Corp. (TSXV: FCC) (OTCQX: FTSSF) has lowered the symbolic Every Child Matters flag. The flag, flown in front of the Company's hydrometallurgical battery materials refinery in the community of Temiskaming Shores, Ontario will remain lowered for the next 30 days.

The day honors the lost children and survivors of Canadian residential schools, their families and communities. Public commemoration of the tragic and painful history and ongoing impacts of residential schools is a vital component of the reconciliation process.

"We want to acknowledge the importance of inclusivity and collaboration among all peoples. As a corporate entity working within First Nations lands, we are committed to playing an active role in supporting their future. Recognition of the significance of this Day is a start to the reconciliation and healing process we whole-heartedly support", explains President and CEO, Trent Mell. 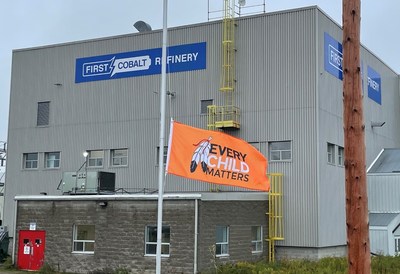 Since its arrival in Ontario, Canada, First Cobalt has been dedicated to building and maintaining respectful and mutually beneficial relationships with all the local Indigenous people and First Nations communities; namely the Timiskaming First Nation, Temagami First Nation, Matachewan First Nation, Beaverhouse First Nation and Metis Nation of Ontario. Over the past several years, the Company has held numerous consultations and open houses to gain the insights and perspective of these groups. Through collaborative reviews of permit applications for the re-opening of the Company's refinery, support has been gained for the project.

First Cobalt is also committed to employment and potential business opportunities specifically for Indigenous people as the refinery construction activities ramp-up. First Cobalt has partnered with First Nation communities on new initiatives to study potential environmental impacts to plants and wildlife in the refinery area. Student bursaries and community support funding has also been an area of focus thus far.