Use of this site indicates acceptance of the Privacy Policy and Terms of Use.
The information on this Website is not reliable and not intended to provide tax, legal, or investment advice. Nothing contained on the Website shall be considered a recommendation, solicitation, or offer to buy or sell a security to any person in any jurisdiction.
CEO.CA members discuss high-risk penny stocks which can lose their entire value. Only risk what you can afford to lose.
© 2016 - Pacific Website Company Inc.
@newswire/granada-gold-mine-intersects-1145-gt-gold-over-33 ↻
0 online
Today This week
Search Subscribe
Members of @newswire/granada-gold-mine-intersects-1145-gt-gold-over-33

ROUYN NORANDA, QC, Jan. 9, 2020 /CNW/ - Granada Gold Mine Inc. (TSXV: GGM) (the "Company" or "Granada") is pleased to provide assays results from the last hole in the latest drill program at its 100%-owned Granada gold deposit in Rouyn-Noranda. Unexpected near-surface, high-grade mineralization has been discovered within the recently explored two-kilometer LONG Bars Zone of the five and half kilometer Granada Shear zone which trends east-west on the property.

The 450-meter Fall, 2019 drill program focused on testing the gold grade continuity and variability within mineralized structures. The Granada Shear Zone and the South Shear Zone contains, based on historical detailed mapping as well as from current and historical drilling, up to twenty-two mineralized structures trending east-west over five and half kilometers. Three of these structures were mined historically from two shafts and two open pits. Historical underground grades were 8 to 10 grams per tonne gold from two shafts down to 236 m and 498 m with open pit grades from 5 to 3.5 grams per tonne gold.

Hole GR-19-A was drilled down-dip from a surface exposure of the mineralized zone composed of a massive quartz vein within a sheared and altered conglomerate adjacent to feldspar porphyry to the south. The entire mineralized zone has a 9-meter horizontal thickness in that sector. GR-19-A was drilled at azimuth 21 degrees North with a dip of 41 degrees in NQ core size.

An ongoing drilling and stripping exploration program at Granada will focus on defining new zones of high-grade mineralization, both on surface and at depth. Numerous high-grade intercepts have been found from surface to below a depth of 1000 meters.  It is open both at depth and on east-west strike for 5.5 kilometers." 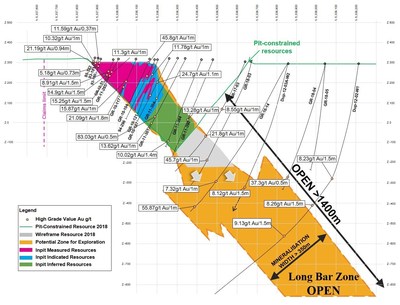 The company has completed surface stripping over a 25-meter by 50-meter extent in the immediate area and has begun another short drill program to further test for near-surface high grade mineralization.

The company has retained the drilling services of MultiDrilling based in Rouyn-Noranda. The program was under supervision of GoldMinds Geoservices technical team.

The Company has closed a private placement financing raising gross proceeds of $200,000. A total of 2,000,000 units were issued with each unit consisting of one common share in the capital of the Company and one share purchase warrant. Each warrant entitles the holder to purchase one share of the Company for a period of two years from closing at an exercise price of $0.15 cents per share.

All securities issued are subject to a four-month-and-a-day hold period expiring on May 10, 2020, in accordance with applicable securities laws. The private placement is subject to final TSX Venture Exchange approval.

The proceeds of the private placement will be used for surface exploration, trenching, and historical resampling of drill core on the Company's Granada Gold Property in Québec and for general working capital purposes.

The technical information in this news release has been reviewed by Claude Duplessis, P.Eng., GoldMinds Geoservices Inc. member of Québec Order of Engineers and a qualified person in accordance with National Instrument 43-101 standards.

All NQ core assays reported were obtained by either 1-kilogram screen fire assay or standard 50-gram fire-assaying-AA (Atomic Absorption) finish or gravimetric finish at (i) ALS Laboratories in Val d'Or, Québec, Thunder Bay, Ontario, Sudbury, Ontario or Vancouver, British Columbia. The screen assay method is selected by the geologist when samples contain visible gold. All samples are also analyzed for multi-elements, using an Aqua Regia-ICP-AES method at ALS Laboratories. The drill program, Quality Assurance/Quality Control ("QA/QC") and interpretation of results is performed by qualified persons employing a QA/QC program consistent with NI 43-101 and industry best practices. Standards and blanks are included with every 12 samples for QA/QC purposes for this program in addition to the lab QA/QC.

About Granada Gold Mine Inc.

Granada Gold Mine Inc. continues to develop the Granada Gold Property near Rouyn-Noranda, Quebec. Approximately 120,000 meters of drilling has been completed to date on the property, focused mainly on the extended LONG Bars zone which trends 2 kilometers east-west over a potential 5.5 kilometers of mineralized structure. The highly prolific Cadillac Break, the source of more than 75 million plus ounces of gold production in the past century, cuts through the north part of the Granada property.

+ Open pit mineral resources are reported at a cut-off grade of 0.4 g/t Au within a conceptual pit shell. Cut-off grades are based on a gold price of US$1,300 per ounce, a foreign exchange rate of US$0.76, and a gold recovery of 95%.

The Company is in possession of all mining permits that are required to commence the initial mining phase, known as the "Rolling Start", which allows the company to mine up to 550 tonnes per day. Additional information is available at www.granadagoldmine.com.

Neither the TSX Venture Exchange nor its Regulation Service Provider (as that term is defined in the policies of the TSX Venture Exchange) accepts responsibility for the adequacy or accuracy of this release. This news release may contain forward-looking statements including but not limited to comments regarding the timing and content of upcoming work programs, geological interpretations, receipt of property titles, potential mineral recovery processes, etc. Forward-looking statements address future events and conditions and therefore, involve inherent risks and uncertainties. Actual results may differ materially from those currently anticipated in such statemen