Use of this site indicates acceptance of the Privacy Policy and Terms of Use.
The information on this Website is not reliable and not intended to provide tax, legal, or investment advice. Nothing contained on the Website shall be considered a recommendation, solicitation, or offer to buy or sell a security to any person in any jurisdiction.
CEO.CA members discuss high-risk penny stocks which can lose their entire value. Only risk what you can afford to lose.
© 2016 - Pacific Website Company Inc.
@newswire/great-bear-completes-14-drill-fences-along-32-kilometres ↻
0 online
Today This week
Search Subscribe
Members of @newswire/great-bear-completes-14-drill-fences-along-32-kilometres

Chris Taylor, President and CEO of Great Bear said, "With aggressive drilling we have now completed 14 drill fences spaced from 50 to 800 metres apart along 3.2 kilometres (or just 18%) of the LP Fault and have a large number of drill results pending.  New observations have transformed our understanding of the LP Fault mineralization system.  We have observed similar and correlatable geology and/or mineralization styles within all drill holes intersecting the structure to-date.  We will continue to utilize sub-zone names such as Bear-Rimini, Yuma and Auro for geographic reference, however it now appears these are portions of a continuous mineralized system spanning kilometres of strike length which remains open along strike and at depth."

Highlights of the LP Fault drill program's progress to-date include:

Fully funded with $18m in cash, Great Bear plans to drill along approximately 18 kilometres of the strike length of the LP Fault target between now and summer 2020. Drilling will continue along strike of the LP Fault in generally 100 metre to 1 kilometre step-outs. 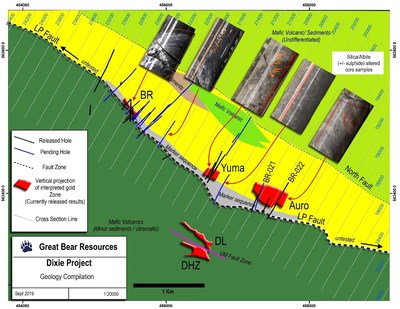 The LP fault represents a major break/deformation zone between felsic and mafic volcanic rocks and is associated with significant gold-bearing alteration.   It is similar in character to other large gold-hosting deformation zones in Archean greenstone belts.  Well-known Canadian examples include the Larder Lake Cadillac Break that extends through Kirkland Lake and Val D'Or, the Porcupine Destor Fault Zone of the Timmins Camp, the Detour Lake Fault Zone, the Pike Fault in the Meliadine camp of Nunavut, and the Cochenour-Gullrock deformation zone of the Red Lake Mine complex. 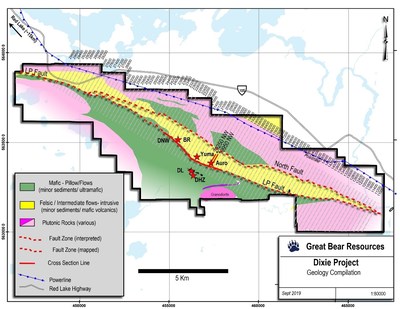 While most additional drill results remain pending at this time, completed assays from two additional Auro Zone drill holes have been returned to-date and are summarized in Table 1: 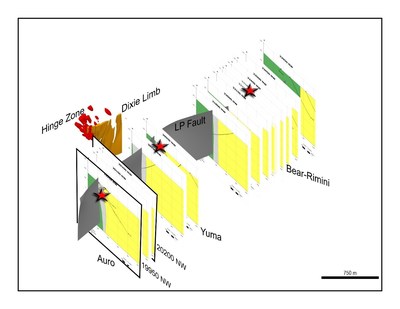 Great Bear will continue to provide regular drill program updates throughout the remainder of 2019 and through 2020.  Assay results will continue to be released in batches as received and processed.  Approximately 28,000 metres of drilling remain to be completed as part of the Company's ongoing 90,000 metre drill program.

Table 1: Assay intervals from the newest LP Fault drilling in Auro Zone area.  Vertical depths reported from the centre of each interval. 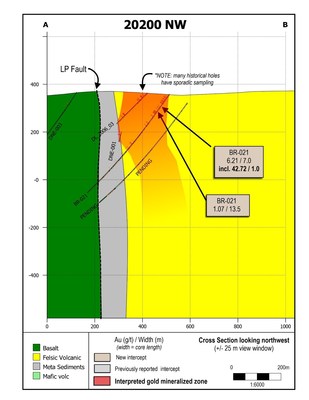 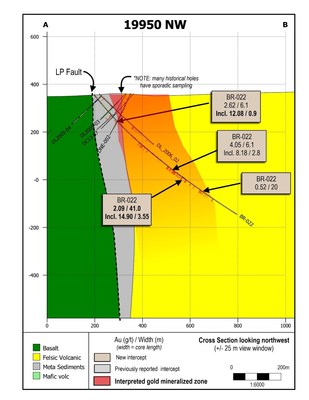 Great Bear Resources Ltd. (TSX-V: GBR) is a well-financed company based in Vancouver, Canada, managed by a team with a track record of success in the mineral exploration sector. Great Bear holds a 100% interest, royalty free, in its flagship Dixie property, which is road accessible year-round via Highway 105, a 15 minute drive from downtown Red Lake, Ontario.  The Red Lake mining district is one of the premier mining districts in Canada, benefitting from major active mining operations including the Red Lake Gold Mine of Newmont Goldcorp Corp., plus modern infrastructure and a skilled workforce.  Production from the Red Lake district does not necessarily reflect the mineralization that may, or may not be hosted on the Company's Dixie property.

The LP Fault is large a trans-crustal deformation zone that is interpreted to traverse the Dixie property for approximately 20 kilometres of strike length and has been drilled along 3.2 kilometres of strike length to-date.  It hosts high-grade gold mineralization that is controlled by structural and geological contacts, and low to moderate grade disseminated gold that surrounds and flanks the high-grade intervals.  The dominant gold-hosting stratigraphy consists of felsic sediments and volcanic units.

In addition, Great Bear is also earning a 100% royalty-free interest in the Pakwash, Dedee and Sobel properties, which cover regionally significant gold-controlling structures and prospective geology.  All of Great Bear's Red Lake projects are accessible year-round through existing roads.