Use of this site indicates acceptance of the Privacy Policy and Terms of Use.
The information on this Website is not reliable and not intended to provide tax, legal, or investment advice. Nothing contained on the Website shall be considered a recommendation, solicitation, or offer to buy or sell a security to any person in any jurisdiction.
CEO.CA members discuss high-risk penny stocks which can lose their entire value. Only risk what you can afford to lose.
© 2016 - Pacific Website Company Inc.
@newswire/great-bear-drills-new-near-surface-high-grade-yauro ↻
0 online
Today This week
Search Subscribe
Members of @newswire/great-bear-drills-new-near-surface-high-grade-yauro

VANCOUVER, Oct. 30, 2019 /CNW/ - Great Bear Resources Ltd. (the "Company" or "Great Bear", TSX-V: GBR) today reported new results from its ongoing, fully-funded 90,000 metre drill program at its 100% owned Dixie project in the Red Lake district of Ontario.  Three new gold discoveries have been made and drill results disclosed in this news release are from the following zones along the LP Fault: Yauro (new zone), Viggo (new zone), Bear-Rimini, Northwest of Bear Rimini; and along the North Fault (new zone), which runs parallel to the LP Fault.  Highlights include:

Table 1: Most recent results from drilling along 4 kilometres of the LP Fault target.

*Widths are drill indicated core length, as insufficient drilling has been undertaken to determine true widths at this time.  Average grades are calculated with un-capped gold assays, as insufficient drilling has been completed to determine capping levels for higher grade gold intercepts.  Average widths are calculated using a 0.10 g/t gold cut-off grade with < 3 m of internal dilution of zero grade.

Chris Taylor, President and CEO of Great Bear said, "The new high grade Yauro discovery occurs within a  predicted zone of increased structural dilation between the Yuma and Auro discoveries, and is coincident with one of the recently identified geochemical (SGH) anomalies. I would encourage investors to refer to the cross sections provided in Figures 1, 2 and 3 to gain context.  The LP Fault discovery including the Yauro zone are not typical of vein-hosted Red Lake style gold deposits, but are flanked to the north and south by Red Lake style gold-bearing veins at the Hinge/Limb and new North Fault discoveries.  Two drill holes collared 125 metres apart were required to cross what we interpret as a major dilatancy or "blow" along the LP Fault at Yauro.  Finding something this large and high-grade within metres of the surface is one of the most important discoveries on the project to-date.  And like other areas of the LP Fault, the high-grade is flanked by wide intervals of moderate grade gold mineralization that could be very important for the project as it progress to more advanced stages." 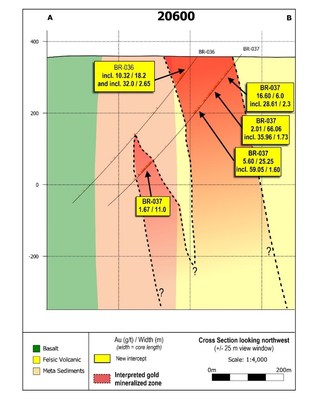 This discovery marks the largest apparent concentration of near-surface high-grade gold intersected at the Dixie property to-date.  The relationship between the Yauro Zone, LP Fault, Dixie Limb and Hinge Zones is shown in cross section on Figure 3. Coarse visible gold was observed in several intervals at the Yauro Zone, as shown on Figure 4. 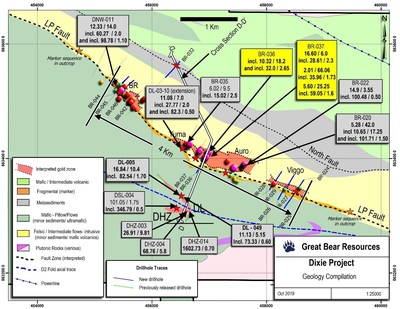 Oriented structural data collected during drilling shows that the Yauro Zone trends northwest to southeast, parallel to the LP Fault.  Discovery holes BR-036 and BR-037 were drilled towards the southwest, at right angles to the mineralized trend. 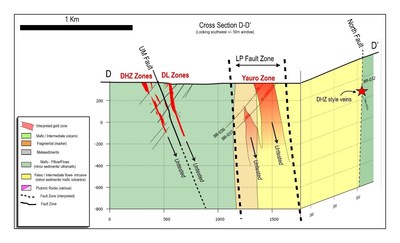 The Company continues to step-out systematically along strike of the LP Fault to the east. 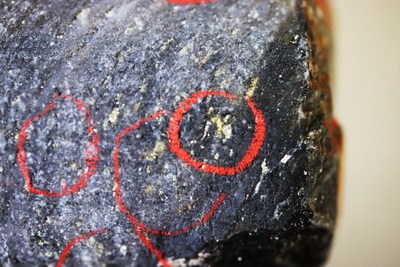 A single test drill hole, BR-032, was completed across the North Fault, which is a major geophysical lineament that parallels the LP Fault for over 18 kilometres of strike length, up to 1.2 kilometres to the north of the LP Fault.  The drill hole discovered gold-bearing quartz veins similar to those observed at the Hinge Zone within 3 metres of the projection of the North Fault, as shown on Figure 6.

The main quartz vein assayed 1.39 g/t gold over 2.70 metres with an individual assay of 2.32 g/t over 0.50 metres.  Of note, the vein was hosted by similar mafic volcanic units to those observed at the Hinge Zone.  The location of the North Fault gold vein drill intercept is also shown in cross section of Figure 3.

Chris Taylor said, "This was a surprising result, and has the potential to become a significant discovery, since this target is over 18 kilometres long and is well defined geophysically.  Prior to drilling, we had expected to see another deformation zone like the LP Fault, but instead the drill hole intersected minimally sheared rocks with gold mineralized quartz veins similar to the Hinge Zone, hosted by similar mafic volcanic rocks to those we see at Hinge Zone and Dixie Limb.  At both the Hinge and Dixie Limb zones, high-grade gold is concentrated in steeply-plunging zones within the quartz veins.  We now need to complete a grid of test holes along the North Fault to determine if such concentrations exist there as well, and what their orientations and spatial distributions are."

Follow-up drilling will be carried out along the North Fault during the winter 2019 to 2020 drill program. 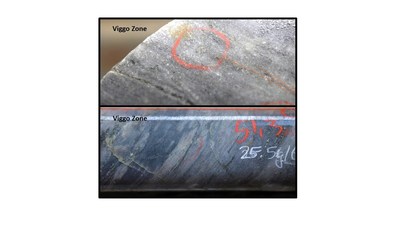 Great Bear's exploration team has observed gold mineralization to be largely continuous over several kilometres of the LP Fault, including between the Bear-Rimini, Yuma, Yauro, Auro and Viggo discoveries, and is currently completing drill fences between already drilled areas to establish continuity.  The Company will continue to undertake widely spaced reconnaissance step-out drilling along the LP Fault until the limits of the gold mineralized system are reached.

Sub-zone names like Bear-Rimini and Yauro will continue to be utilized to communicate where discoveries and ongoing drilling occur.  The LP Fault is a geophysically-defined target that extends along approximately 18.5 kilometres of strike length at the Dixie property.  4 kilometres of this strike length have been tested to date, with gold observed and/or detected in all drill holes that have successfully intersected the structure. 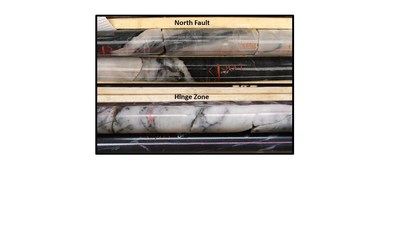 A number of additional regional targets outside of the LP Fault also have yet to be tested across the property, including regional D2 fold axes such as that which hosts the Hinge Zone, and Soil Geochemical Hydrocarbon survey targets which were disclosed by the Company on October 10, 2019.

A webinar will take place on Wednesday, November 6th at 4:05 pm EST/ 1:05 pm PST where Chris Taylor will update shareholders on the Company's recent progress.  Chris will be available to answer questions following the presentation.  Online registration and participation details may be found at the following link:

For those unable to participate, a recording of the webinar will be posted to the Company's web site following the live broadcast.

Great Bear Resources Ltd. (TSX-V: GBR) is a well-financed company based in Vancouver, Canada, managed by a team with a track record of success in the mineral exploration sector. Great Bear holds a 100% interest in its flagship Dixie property, which is road accessible year-round via Highway 105, a 15 minute drive from downtown Red Lake, Ontario.  The Red Lake mining district is one of the premier mining districts in Canada, benefitting from major active mining operations including the Red Lake Gold Mine of Newmont Goldcorp Corp., plus modern infrastructure and a skilled workforce.  Production from the Red Lake district does not necessarily reflect the mineralization that may, or may not be hosted on the Company's Dixie property.

The LP Fault is large a trans-crustal deformation zone that is interpreted to traverse the Dixie property for approximately 20 kilometres of strike length and has been drilled along 4.0 kilometres of strike length to-date.  It hosts high-grade gold mineralization that is controlled by structural and geological contacts, and low to moderate grade disseminated gold that surrounds and flanks the high-grade intervals.  The dominant gold-hosting stratigraphy consists of felsic sediments and volcanic units.

In addition, Great Bear is also earning a 100% royalty-free interest in the Pakwash, Dedee and Sobel properties, which cover regionally significant gold-controlling structures and prospective geology.  All of Great Bear's Red Lake projects are accessible year-round through existing roads.