Use of this site indicates acceptance of the Privacy Policy and Terms of Use.
The information on this Website is not reliable and not intended to provide tax, legal, or investment advice. Nothing contained on the Website shall be considered a recommendation, solicitation, or offer to buy or sell a security to any person in any jurisdiction.
CEO.CA members discuss high-risk penny stocks which can lose their entire value. Only risk what you can afford to lose.
© 2022 - CEO.CA Technologies Ltd.
@newswire/highest-gold-grades-to-date-reported-from-new-trend ↻
0 online
Today This week
Search Subscribe
Members of @newswire/highest-gold-grades-to-date-reported-from-new-trend

OTTAWA, June 24, 2019 /CNW/ - Northern Shield Resources Inc. ("Northern Shield" or the "Company") (TSXV: NRN) is pleased to provide an update on exploration at the Shot Rock Gold Property (the "Property" or "Shot Rock") in Nova Scotia, which is being explored for epithermal gold mineralization. Northern Shield can earn up to an 80% interest in the Property. 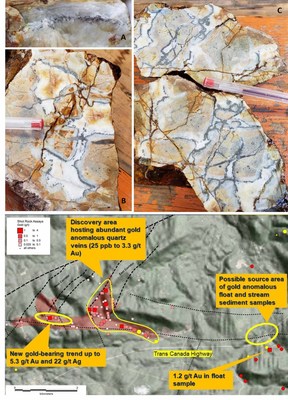 Assays from rock sampling of the second low sulphidation system discovered within the Highway Zone at Shot Rock (see Press Release dated May 1, 2019) show a 300 metre long gold-anomalous trend including assays of 5.3 and 4.9 g/t Au. These are the two highest gold assays reported from Shot Rock to date. These two samples are composed of brecciated and potassic altered rhyolite with void fillings of crustiform banded quartz, bands of sulphide and coarser comb-textured quartz. The sulphide-rich bands are dominantly composed of pyrite though silver minerals are also present. A photo of one of the gold-bearing samples is provided below (Photo A). A further 24 of 59 samples from this trend were anomalous in gold (> 0.025 g/t Au). (A list of assays from this subset can be found on the Company's website.) The two highest rock samples come from float material (local) with the remainder a mix of sub-crop, float (local) and outcrop. This trend is dominated by stockwork-style epithermal quartz veining and chalcedonic veins/bands hosted in clay-altered rhyolite.

A follow-up visit was made to the site of the two samples mentioned above and hand trenching located another large angular boulder, suggesting local providence, in addition to what appears to be sub-crop of similar material. Twenty further samples were collected from these sites. Some of these samples contain significantly more sulphide bands than the two samples reported above (see Photos B & C). Assays are pending from this batch of samples.

Significantly, a small boulder of crustiform banded quartz vein which assayed 1.2 g/t Au has been found approximately 5 kilometres east, along strike from the Highway Zone. The sample was collected in the same general area as several historic gold anomalous stream sediment samples and a few hundred metres south of the same structure that hosts the Highway Zone.

"I have just returned from a tour of the Highway Zone and the extent of the system and the intensity of the veining and alteration is really impressive. Although the surface exposure of the mineralized system is high-level and seemingly above the boiling cap, we are beginning to see leakage of higher grades which bodes well to what may be encountered at depth," explains Northern Shield President and CEO, Ian Bliss. "The discovery of a float sample of gold-bearing crustiform banded quartz vein 5 kilometres east of the Highway Zone hints that there is yet more to be found at Shot Rock."

The programs are being overseen by Christine Vaillancourt, P. Geo., the Company's Chief Geologist and a Qualified Person under National Instrument 43-101. Samples were analyzed by ALS Global in Sudbury, Ontario and in Vancouver, BC, for Au by Fire Assay with ICP-AES finish and base metals by four acid digestion and ICP-AES. All standards and duplicates by ALS meet targeted values.

This news release contains statements concerning the exploration plans, results and potential for epithermal gold deposits, and other mineralization at the Company's Nova Scotia properties, geological, and geometrical analyses of the properties and comparisons of the properties to known epithermal gold deposits in Nevada and elsewhere, and other expectations, plans, goals, objectives, assumptions, information or statements about future, conditions, results of exploration or performance that may constitute forward-looking statements or information under applicable securities legislation.  Such forward-looking statements or information are based on a number of assumptions, which may prove to be incorrect.