Use of this site indicates acceptance of the Privacy Policy and Terms of Use.
The information on this Website is not reliable and not intended to provide tax, legal, or investment advice. Nothing contained on the Website shall be considered a recommendation, solicitation, or offer to buy or sell a security to any person in any jurisdiction.
CEO.CA members discuss high-risk penny stocks which can lose their entire value. Only risk what you can afford to lose.
© 2021 - CEO.CA Technologies Ltd.
@newswire/meridian-commences-drilling-on-cabaal-west-conductor ↻
0 online
Today This week
Search Subscribe
Members of @newswire/meridian-commences-drilling-on-cabaal-west-conductor

Drilling underway on Cabaçal West and near mine Cabaçal EM conductors.

LONDON, July 20, 2021 /CNW/ - Meridian Mining UK S (TSXV: MNO) (Frankfurt: 2MM) (OTCQB: MRRDF) ("Meridian" or the "Company") is pleased to report that it has initiated drilling on the Cabaçal West target recently defined by its Fixed-Loop Transient Electro-Magnetic ("FLTEM") surface surveys at its Cabaçal Copper-Gold Project ("Cabaçal") in Mato Grosso, Brazil. Cabaçal West is 1.5km west of the Cabaçal mine and coincident with a significant soil anomaly while the FLTEM response is open and strengthens to the northwest. An associated strong copper in soil anomaly also remains open to the west approaching the conductor. The initiation of the near mine drill program marks the first phase in a long-term program to test the numerous prospects defined by the recent VTEM airborne survey, and the historical surface exploration programs of BP Minerals / RTZ.

"We are excited to initiate drilling on Cabaçal West, one of many bedrock targets distributed along the 36kms of prospective VMS stratigraphy in this under-explored camp," commented Dr Adrian McArthur, CEO and President. "Meridian's in-house geophysical survey team has remained active in deploying our own state of the art geophysical equipment on surface surveys to the south-east of the mine. This new phase of exploration drilling will be accompanied by bore-hole EM surveys, to further develop vectors in the 3D targeting of hidden sulphide mounds. These deposits are known to occur in clusters in analogue VMS camps, and FLTEM has been a key tool in unlocking discoveries over the life of these camps. Our ongoing drill program will balance drilling on new targets with ongoing resource definition on Cabaçal itself in this exciting expansion phase for the Company".

Cabaçal Near Mine Drilling Campaign

The initiation of the drill program targeting blind geophysical anomalies marks the first phase in a long-term program to test the many target positions defined by both the more recent VTEM survey, and historical surface exploration programs of BP Minerals / RTZ. This wealth of near surface, untested targets is not unusual as Cabaçal is a camp scale and intact VMS system. In addition, the Company has commenced a program to digitize available historical geophysical data retrieved from the archives of RTZ, to refine drill targets for massive to disseminated sulphides characteristic of Volcanic Massive Sulphide ("VMS") systems.

The Company has commenced drilling on two near-mine targets, tarting Cabaçal West and Cabaçal South (Figure 1). These targets represent the first of multiple anomalies representing targets for massive sulphide mineralization in the Cabaçal VMS system distributed over the 36 strike-kilometres of prospective stratigraphy. The initiation of the drilling program follows Meridian's successfully deployment of its new Electro-Magnetic survey equipment purchased from EMIT (ElectroMagnetic Imaging Technology) – an Australian specialist manufacturer whose equipment has been successfully deployed in analogue camps such as Hudbay's Flin Flon project in Canada.

The initial targets being prioritised for drilling include Cabaçal West, defined by Meridian's recent in-house survey program, and Cabaçal South, defined during the first phase of orientation work by Brazilian geophysical contractor, Geomag.

The Cabaçal West conductor forms a deep-rooted late channel response extending over 485m in length, open to the NW. The modelled plate ("Plate") is situated along the Cabaçal conductive trend, 1.5 km west-northwest of the historical Cabaçal mine and down dip from an extensive Cu-Au soil anomaly. The EM conductivity increases with depth and strengthens to the north-west. The modelled late channel response has a conductance is 109 Siemens ("S"), and the conductive source dips 45˚ to the southwest. Cabaçal West's conductivity is over an order of magnitude greater than that surveyed over the Cabaçal deposit, which is dominated by disseminated style mineralization and lower intervals of stringer and stockwork mineralization.

The Cabaçal South late channel conductor measures 200m in strike length, and is a stronger conductor than Cabaçal West. The conductor is centred approximately 430m to the south of the historical limit of development of the Cabaçal Mine. The modelled plate dips 37˚ to the southwest and has a conductivity of 458 S.

These targets represent two of 21 targets in the belt defined by the 2007 VTEM survey, and additional "C-series" targets developed by historical mapping, geochemical and early geophysical programs of BP Minerals, whose programs discovered greenstone belts in the 1980's. In addition, there are some 27 conductors defined by the aerial INPUT surveys within the Company's 484 km² of new licenses in the adjacent Jaurú & Araputanga Greenstone belts, which form part of the long-term exploration and development strategy of the Company with a focus on copper and gold.

The Company has engaged the contract services of Brazilian specialist geophysicist Eduardo Henrique, who has 25 years of experience, working for Western Mining Corporation, Reconsult Geofísica Ltda, and Vale Metais S/A. who has support the initiation of the Company's in-house survey program, and to conduct a review of historical geophysical data and reports retrieved from the archives of RTZ. Some initial observations from past data and reporting indicate that the mineralized Cabaçal Deposit is associated with:

The chargeability response associated with the main deposit are very high (historical line LT600N) – readings typically above 20 mV extending up to 90mV – uncommonly high.  Whilst part of the deposit projects below a mafic dyke, an IP response extends up to 2km south of the historical mine workings, into BP's C2 target area. The data is under review and will form an important foundation for focussing ongoing exploration programs building out from the Cabaçal mine. 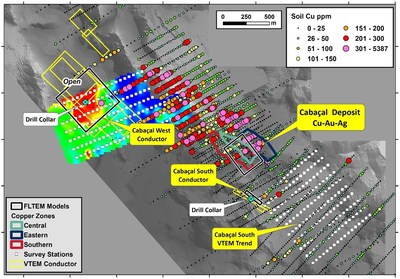 The Company appreciates the support of local landholders who have signed contracts facilitating the extension of surveys over and to the south of the historical Cabaçal mine site, and continues a program to engage with further landholders in this historical mining district. The Company draws much of its current employees from local communities. Survey work is non-disturbing to grazing land on which it occurs, and activities from drilling programs will undergo progressive rehabilitation to return areas of limited ground disturbance to the same high-quality pasture.

Electromagnetic surveys have been conducted using the SMARTem Geophysical Receiver System manufactured by ElectroMagnetic Imaging Technology (EMIT). Data sent to the Company's independent consultant, Core Geophysics. Modelling of conductivity response is undertaken using industry-standard Maxwell software. Geophysical targets are preliminary in nature and not conclusive evidence of the likelihood of a mineral deposit.

Meridian Mining UK S is focused on the acquisition, exploration and development activities in Brazil. The Company is currently focused on resource development of the Cabaçal VMS Copper-Gold project, exploration in the Jaurú & Araputanga Greenstone belts located in the State of Mato Grosso; exploring the Espigão polymetallic project and the Mirante da Serra manganese project in the State of Rondônia, Brazil.

Some statements in this news release contain forward-looking information or forward-looking statements for the purposes of applicable securities laws. These statements include, among others, statements with respect to the Company's plans for exploration, development and exploitation of its properties and potential mineralization. These statements address future events and conditions and, as such, involve known and unknown risks, uncertainties and other factors, which may cause the actual results, performance or achievements to be materially different from any future results, performance or achievements expressed or implied by the statements. Such risk factors include, among others, failure to obtain regulatory approvals, failure to complete anticipated transactions, the timing and success of future exploration and development activities, exploration and development risks, title matters, inability to obtain any required third party consents, operating risks and hazards, metal prices, political and economic factors, competitive factors, general economic conditions, relationships with strategic partners, governmental regulation and supervision, seasonality, technological change, industry practices and one-time events. In making the forward-looking statements, the Company has applied several material assumptions including, but not limited to, the assumptions that: (1) the proposed exploration, development and exploitation of mineral projects will proceed as planned; (2) market fundamentals will result in sustained metals and minerals prices and (3) any additional financing needed will be available on reasonable terms. The Company expressly disclaims any intention or obligation to update or revise any forward-looking statements whether as a result of new information, future events or otherwise except as otherwise required by applicable securities legislation.