Use of this site indicates acceptance of the Privacy Policy and Terms of Use.
The information on this Website is not reliable and not intended to provide tax, legal, or investment advice. Nothing contained on the Website shall be considered a recommendation, solicitation, or offer to buy or sell a security to any person in any jurisdiction.
CEO.CA members discuss high-risk penny stocks which can lose their entire value. Only risk what you can afford to lose.
© 2022 - CEO.CA Technologies Ltd.
@newswire/meridian-drills-strongest-zones-of-visible-gold-and ↻
0 online
Today This week
Search Subscribe
Members of @newswire/meridian-drills-strongest-zones-of-visible-gold-and

The Company has also completed drill hole CD-066, into the Cabaçal West target, intersecting disseminated to stringer sulphide mineralization (sphalerite, chalcopyrite, pyrrhotite) associated with chlorite-sericite-silica alteration and intervals of stratiform carbonate banding. A Bore Hole ElectroMagnetic ("BHEM") survey on CD-066 has detected the strongest conductor to date at 680 Siemens (almost 10 times the norm of conductors at Cabaçal). The modeling of the conductor shows that CD-066 clipped the top corner of the plate at ~380m and the Company is now collaring the next drill hole to target the center of this conductor.

"CD-072's three veins hosting visible gold truncating strong VMS mineralization within the CNWE, indicate strong continuity to the CD-049's high-grade gold core of 8.0m @ 71.3g/t Au & 0.4% Cu", commented Dr Adrian McArthur, CEO and President. "Strong alteration and chalcopyrite dominant bedded sulphide layers suggest we are now defining a second Cu-Au VMS feeder system overprinted by a series of high-grade gold veins, similar to that of the Cabaçal Mine, except the CNWE's high-grade gold vein system is unmined and entirely intact. Ongoing drilling will test for extensions to the Cabaçal system over a 2km strike length and beyond. Plunging below these two VMS feeder systems is the mineralized Cabaçal West target, that we now know has the classic alteration signature to a VMS centre and hosts our strongest BHEM conductor. With these open results, Cabaçal is demonstrating its high prospectivity for multiple open pit and underground Copper-Gold resource development programs". 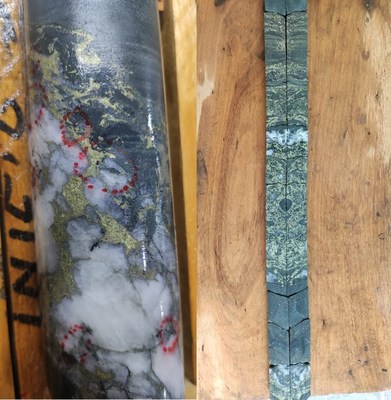 The evolving strike length of these high-grade and shallow gold veins extending out from the Cabaçal Mine along the CNWE corridor has an immediate impact on how Meridian views the development of Cabaçal. CNWE's high-grade Au veins are strongly influencing Cabaçal's future planning for technical and financial studies including but not limited to the repayment of CAPEX time frames, OPEX estimations and location of mine processing facilities. These high-grade gold veins traversing strong Cu-Au VMS type layers are a recent discovery by Meridian and have the potential to exceed the Cabaçal Mine's original mineral endowment, being wholly intact and open. 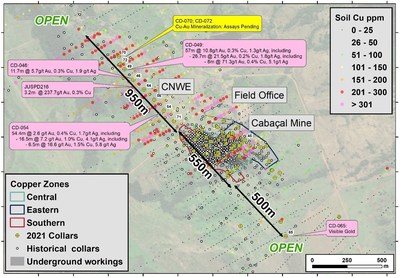 Meridian's primary focus is to develop Cabaçal's camp scale, near surface, high-grade gold veins hosted within Cu-Au (+Zn-Ag) VMS mineralization. During this same period, the additional upside presented by deeper underground targets such as Cabaçal West will continue to be drilled, but future programs will be guided by the expected timeline associated with Cabaçal's surface prospects. Comparative VMS camps have shown that the timelines for the transition to focus a company's activities from surface opportunities that have been or are nearing exhaustion towards underground prospects can be measured over a period of decades.

CD-070 passed through saprolite to 7.2m and saprock / transition zone to 39.5m, from where sulphide abundance increased and continued through to 69.0m (disseminated and stringer zones, with particular concentration from 62.0 to 63.6m (breccia zone)). The contact with the footwall unit (TAC / felsic volcanic sequence) was intersected at 83.4m. The high concentrations of sulphides were unexpected this far north and combined with strong chloritic alteration leads the Company to believe there is a satellite feeder system. The copper-in-soil anomaly defined by BP Minerals extends for a further 350m northwest of CD-070 and remains open, providing a target corridor of at least 2km extent to test associated with the Cabaçal mineral system.

CD-072 intersected saprolite to 24.7m and saprock / transition zone to 38.6m. Disseminated chalcopyrite was evident from 43.1m. Disseminated and stringer mineralization persisted through to a late over-printing quartz vein set containing visible gold, which was developed from 79.4 - 82.1m. Disseminated sulphide extended to 88.0m. The contact with the footwall unit (TAC / felsic volcanic sequence) was intersected at 92.0m.

Hole CD-066 was completed at Cabaçal West, testing the northern sector of the Fixed Loop surface EM response2. Alteration intensity increased down hole at 268.4m accompanied by punctuated disseminated Chalcopyrite – Pyrrhotite – Pyrite mineralization. Intervals of more heavily disseminated to stringer sulphide mineralization were observed intermittently from 367 to 390m, coinciding with an in-hole conductivity response. Modelling of the BHEM data indicates that the hole clipped the top of the anomaly which is modelled with a down-dip extent of 500m. Hole CD-066 was initially planned to a depth of 500m to provide good coupling with the conductor but was extended when at 492m the hole again returned disseminated sulphide mineralization co-incident with the appearance of stratiform carbonate alteration bands through to 533.5m. Periodic disseminated and locally stringer sulphide mineralization persisted to 554.6m. The hole was terminated at 590.6m. The hole contained a significantly wider footprint of mineralization and alteration compared to CD-058, located 130m to the southeast. A new hole is being collared to intersect the extension of the CD-066 position ~150m down-plunge.

The company has completed 72 holes to date for 9,952 metres. With the closure of the recent financing the Company has lifted the embargo of assays from SGS, and these will be reported shortly after standard QAQC review. With the development of the regional targets, the Company intends to expand the drilling beyond the planned 10,000m program. CD-058 continuation was paused due to shipment delays of specialist drill bits and will be revaluated after the follow up hole to CD-066. At least three drill rigs will continue with delineation programs on the CNWE, Cabaçal mine area and Cabaçal South, with periodic testing of longer-term development targets.

Dr. Adrian McArthur, B.Sc. Hons, PhD. FAusIMM., CEO and President of Meridian as well as a Qualified Person as defined by National Instrument 43-101, has supervised the preparation of the technical information in this news release.

Meridian Mining UK S is focused on the acquisition, exploration, and development activities in Brazil. The Company is currently focused on resource development of the Cabaçal VMS Copper-Gold project, exploration in the Jaurú & Araputanga Greenstone belts located in the state of Mato Grosso; exploring the Espigão polymetallic project and the Mirante da Serra manganese project in the State of Rondônia Brazil.

Some statements in this news release contain forward-looking information or forward-looking statements for the purposes of applicable securities laws. These statements include, among others, statements with respect to the Company's plans for exploration, development and exploitation of its properties and potential mineralization. These statements address future events and conditions and, as such, involve known and unknown risks, uncertainties, and other factors, which may cause the actual results, performance, or achievements to be materially different from any future results, performance or achievements expressed or implied by the statements. Such risk factors include, among others, failure to obtain regulatory approvals, failure to complete anticipated transactions, the timing and success of future exploration and development activities, exploration and development risks, title matters, inability to obtain any required third party consents, operating risks and hazards, metal prices, political and economic factors, competitive factors, general economic conditions, relationships with strategic partners, governmental regulation and supervision, seasonality, technological change, industry practices and one-time events. In making the forward-looking statements, the Company has applied several material assumptions including, but not limited to, the assumptions that: (1) the proposed exploration, development and exploitation of mineral projects will proceed as planned; (2) market fundamentals will result in sustained metals and minerals prices and (3) any additional financing needed will be available on reasonable terms. The Company expressly disclaims any intention or obligation to update or revise any forward-looking statements whether as a result of new information, future events or otherwise except as otherwise required by applicable securities legislation.