Use of this site indicates acceptance of the Privacy Policy and Terms of Use.
The information on this Website is not reliable and not intended to provide tax, legal, or investment advice. Nothing contained on the Website shall be considered a recommendation, solicitation, or offer to buy or sell a security to any person in any jurisdiction.
CEO.CA members discuss high-risk penny stocks which can lose their entire value. Only risk what you can afford to lose.
© 2016 - Pacific Website Company Inc.
@newswire/meridian-encounters-wide-intervals-of-mineralisation ↻
0 online
Today This week
Search Subscribe
Members of @newswire/meridian-encounters-wide-intervals-of-mineralisation

LONDON, March 29, 2021 /CNW/ - Meridian Mining UK S (TSXV: MNO) ("Meridian" or the "Company") today announces that the drill and surface geophysical programs have advanced at its Cabaçal copper-gold project in Mato Grosso, Brazil with the completion of the first two diamond holes of the approximate seventy drill hole program Figure 1. The first diamond drill hole ("DDH") CD-001 targeting the Southern Copper Zone ("SCZ") has been concluded to a depth of 189.55m by Rig One. Rig Two concluded CD-002 as an initial test the Easter Copper Zone ("ECZ") and was completed to a depth of 95.2m. Assays from the first two holes are pending. The surface electromagnetic ("EM") program is completed and has defined the Cabaçal mine sequence's response that extends past the historic mine limits. The Company has also signed a technical exchange agreement with the Universidade Federal de Mato Grosso ("UFMT") accessing its historical core collection from Cabaçal.

Highlights of the exploration program's rollout: 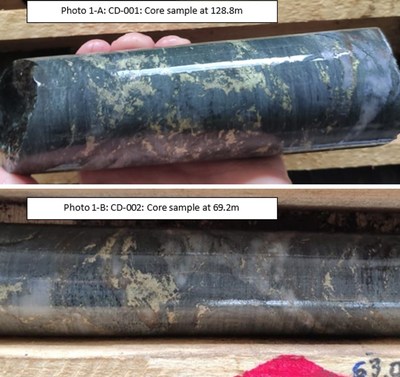 CD-001 was collared above the SCZ and projecting ~ 80m south of the limit of historical workings based on digitized records of historical selective room and pillar mine development. The hole was drilled from the historical drill pad of JUSPD 596, which intersected 15m @ 5.20% Cu, 2.66g/t Au, 9.54 g/t Ag. CD-001 was drilled HQ through the saprolite and upper bedrock and reduced to NQ. The hole intersected the "CTB" mine sequence unit - a foliated meta-volcaniclastic horizon, with disseminated sulphides and local stringer mineralisation, from 50m downhole, and continued to the acid volcanic footwall ("TAC") from 151.6m. As standard practice CD-001 is now being surveyed to check the down hole trajectory.

CD-002 was collared above the ECZ, ~ 50m west of an exploratory branch of the historical mine workings, into an area where this sequence becomes more copper dominant. Part of the mine stratigraphy here projects below a sub-horizontal gabbroic sill that blocks all surface expression or soil anomaly of the Eastern Copper Zone. The hole was drilled from the historic pad of JUSDP 228, which intersected 23.03m @ 0.95% Cu, 0.3g/t Au, 7g/t Ag, including 3.18, @ 4.45% Cu, 1.36g/t Au, 39.06g/t Ag. Adjacent holes in historical cross sections show the projection of stringer sulphide zones, with verification drilling required in some areas where historical assays are not available. CD-002 confirms that the ECZ remains open and requires further drilling. The 1990 Mason and Kerr targeting study stresses that testing the extension of this sequence to the east is a high priority exploration target, for the potential of a fourth centre of focussed copper-gold vein systems as part of a larger hydrothermal discharge field: "We cannot stress enough the importance of exhaustive exploration for VMS-related mineralization at this highly-productive CTB/TAC contact horizon". CD-002 was drilled HQ to end of hole and intersected a 24.2m wide package of CTB stratigraphy with disseminated to stringer and breccia sulphides.

Rig 2 initially focused on the ECZ while Rig One's DDH CD-001 was completed, providing the platform for the first Bore Hole EM survey targeting the zones of strong Cu-Au mineralisation historically drilled from surface and underground. There is some spatial variance in the exact position of these intersections, and with the precise position of the surface collars no longer visible on the two historical drill pads (and limited historical down-hole survey information). Bore Hole EM is being conducted as a vectoring tool to better orientate the surface program to more concentrated stringer to brecciated/stockwork sulphide concentrations within the SCZ. Once this zone's program is completed the drill program will then proceed with a combination of twinning, infill and extension drilling on the program's other known targets. 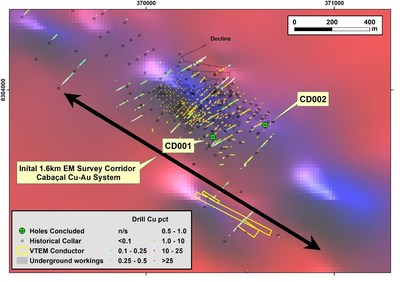 Dr Adrian McArthur, CEO, states, "I congratulate the technical and administrative team on initiating the concurrent geophysical and drilling programs at a time at Cabaçal so promptly after receiving the environmental. The core is being cut for dispatch and we soon will be receiving a steady stream of assays and other analytical data. The geophysical orientation work over the Cabaçal deposit has shown great promise. We will extent geophysical trails using the company's own IP equipment as a parallel tool for testing for Cabaçal's style of EM responses in addition to the established VTEM targets. BHEM will be an important tool and ongoing work will be conducted in campaigns, with a particular focus on areas of structural complexity such as the southern copper zone with the shallow-east dipping stratigraphy interacts with the steep NE-striking Alpha Fault. Via the agreement with UFMT we can now have access to their Cabaçal core library and re-assay it as part of the verification of the historical drill results and collaborate in field programs and technical studies at Cabaçal."

Meridian Mining UK S is focused on the acquisition, exploration and development activities in Brazil. The Company is currently focused on developing the Cabaçal VMS Copper-Gold project in the state of Mato Grosso; exploring the Espigão polymetallic project, the Mirante da Serra manganese project, and the Ariquemes tin portfolio in the State of Rondônia Brazil.

Some statements in this news release contain forward-looking information or forward-looking statements for the purposes of applicable securities laws.  These statements include, among others, statements with respect to the Company's plans for exploration, development and exploitation of its properties and potential mineralisation.  These statements address future events and conditions and, as such, involve known and unknown risks, uncertainties and other factors, which may cause the actual results, performance or achievements to be materially different from any future results, performance or achievements expressed or implied by the statements. Such risk factors include, among others, failure to obtain regulatory approvals, failure to complete anticipated transactions, the timing and success of future exploration and development activities, exploration and development risks, title matters, inability to obtain any required third party consents, operating risks and hazards, metal prices, political and economic factors, competitive factors, general economic conditions, relationships with strategic partners, governmental regulation and supervision, seasonality, technological change, industry practices and one-time events.  In making the forward-looking statements, the Company has applied several material assumptions including, but not limited to, the assumptions that: (1) the proposed exploration, development and exploitation of mineral projects will proceed as planned; (2) market fundamentals will result in sustained metals and minerals prices and (3) any additional financing needed will be available on reasonable terms.  The Company expressly disclaims any intention or obligation to update or revise any forward-looking statements whether as a result of new information, future events or otherwise except as otherwise required by applicable securities legislation.