Use of this site indicates acceptance of the Privacy Policy and Terms of Use.
The information on this Website is not reliable and not intended to provide tax, legal, or investment advice. Nothing contained on the Website shall be considered a recommendation, solicitation, or offer to buy or sell a security to any person in any jurisdiction.
CEO.CA members discuss high-risk penny stocks which can lose their entire value. Only risk what you can afford to lose.
© 2022 - CEO.CA Technologies Ltd.
@newswire/neo-lithium-receives-catamarca-government-approval ↻
0 online
Today This week
Search Subscribe
Members of @newswire/neo-lithium-receives-catamarca-government-approval

by @newswire on 11 Jan 2022, 07:30
Neo Lithium Receives Catamarca Government Approval of its Environmental Impact Assessment for the Construction and Operation of its 3Q Project

TORONTO, Jan. 11, 2022 /CNW/ - Neo Lithium Corp. ("Neo Lithium" or the "Company") (TSXV: NLC) (OTCQX: NTTHF) (FSE: NE2) is pleased to announce that its wholly owned subsidiary, LIEX S.A. ("LIEX"), has received a "Declaracion de Impacto Ambiental" (the "DIA") from the Environmental and Mining Authority in Catamarca Province, Argentina. The DIA represents the Environmental and Mining Authority's approval of LIEX's Environmental Impact Assessment (the "EIA") for construction and operation of the mine as set out in the feasibility study for its wholly-owned Tres Quebradas lithium brine project ("3Q Project") announced on October 26, 2021 and described in the technical report filed on November 25, 2021. The DIA is the main environmental approval document required for the construction and operation of mining projects in Catamarca Province. 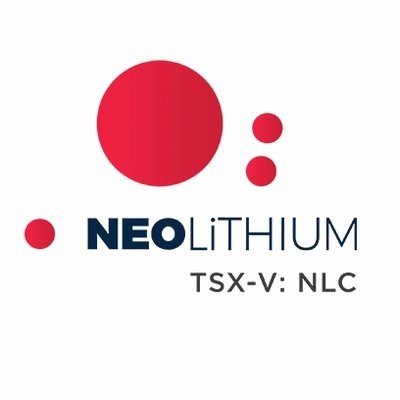 The issuance of the DIA confirms that the EIA is in compliance with the standards and regulations under the national and provincial mining law and contains customary requirements to maintain the DIA in good standing. As part of the issuance of the DIA, the Company agreed with Catamarca Province to fund an infrastructure trust to be administered for the benefit of the 3Q Project and its impacted areas.

As announced on October 8, 2021, Zijin Mining Group Co., Ltd. ("Zijin") (SSE: 601899) (SEHK: 2899) and Neo Lithium entered into a definitive arrangement agreement (the "Arrangement Agreement") pursuant to which Zijin agreed to acquire all the outstanding shares of Neo Lithium (the "Transaction") at a price of C$6.50 per share in cash. The Transaction will be completed pursuant to a court approved plan of arrangement under the Business Corporations Act (Ontario).

The issuance of the DIA satisfies one of the final conditions precedent on the part of the Company to fulfill pursuant to the Arrangement Agreement, other than conditions that can only be satisfied at the effective time of the Transaction.

The Transaction was approved by Neo Lithium's shareholders at a special meeting held for that purpose on December 10, 2021, and the Ontario Superior Court of Justice (Commercial List) granted a final order approving the plan of arrangement to implement the Transaction at a hearing held on December 15, 2021. Zijin is in the process of obtaining approval for the Transaction from relevant authorities in the People's Republic of China. Closing of the Transaction would be expected to close soon thereafter.

The 3Q Project is located in the Province of Catamarca, the largest lithium producing area in Argentina. The project covers approximately 35,000 ha and the salar complex within this area is approximately 16,000 ha.

Additional information regarding Neo Lithium Corp. is available on SEDAR at www.sedar.com under the Company's profile and at its website at www.neolithium.ca.

Cautionary Note Regarding Forward Looking Statements - Certain information set forth in this news release may contain forward-looking statements. Such statements include but are not limited to, statements with respect to the expected satisfaction of conditions precedent related to the Transaction, including approval of the Transaction required from the People's Republic of China, the construction and operation of the 3Q Project, and the anticipated closing of the Transaction and the timing therefor. Generally, forward-looking statements can be identified by the use of words such as "plans", "expects" or "is expected", "scheduled", "estimates" "intends", "anticipates", "believes", or variations of such words and phrases, or statements that certain actions, events or results "can", "may", "could", "would", "should", "might" or "will", occur or be achieved, or the negative connotations thereof. Forward-looking statements are subject to numerous risks and uncertainties, certain of which are beyond the control of the Company, which could cause the actual results, performance or achievements of the Company to be materially different from the future results, performance or achievements expressed or implied by such statements. These risks include, without limitation, the possibility that the Transaction will not be completed on the terms and conditions, or on the timing, currently contemplated, and that it may not be completed at all, due to a failure to obtain or satisfy, in a timely manner or otherwise, required approvals and other conditions of closing necessary to complete the Transaction or for other reasons, the possibility of adverse reactions or changes in business relationships resulting from the announcement or completion of the Transaction, political and regulatory risks associated with mining and exploration activities and operations in Argentina, environmental regulation, and other risks and uncertainties related to the Company's prospects, properties and business detailed elsewhere in the Company's disclosure record, including, but not limited to, the risk factors described in the Company's revised annual information form for the year ended December 31, 2019 available on SEDAR. Although the Company believes its expectations are based upon reasonable assumptions and has attempted to identify important factors that could cause actual actions, events or results to differ materially from those described in forward-looking statements, there may be other factors that cause actions, events or results not to be as anticipated, estimated or intended and undue reliance should not be placed on forward-looking statements.