Use of this site indicates acceptance of the Privacy Policy and Terms of Use.
The information on this Website is not reliable and not intended to provide tax, legal, or investment advice. Nothing contained on the Website shall be considered a recommendation, solicitation, or offer to buy or sell a security to any person in any jurisdiction.
CEO.CA members discuss high-risk penny stocks which can lose their entire value. Only risk what you can afford to lose.
© 2022 - CEO.CA Technologies Ltd.
@newswire/nevada-king-announces-commencement-of-deep-core-drilling ↻
0 online
Today This week
Search Subscribe
Members of @newswire/nevada-king-announces-commencement-of-deep-core-drilling

VANCOUVER, BC, May 3, 2022 /CNW/ - Nevada King Gold Corp. (TSXV: NKG) (OTCQX: NKGFF) ("Nevada King" or the "Company") is pleased to announce initiation of its phase II exploration drilling campaign at the Company's 100% owned Iron Point Gold Project ("Iron Point" or the "Project") in Humboldt County, Nevada. Drilling is currently underway on the first of five diamond drill core tails planned for the 2022 drill program targeting Lower Plate hosted gold. Iron Point is located at the juncture between the prolific Getchell and Battle Mountain gold trends and as such represents a district-scale Carlin-type gold exploration target. 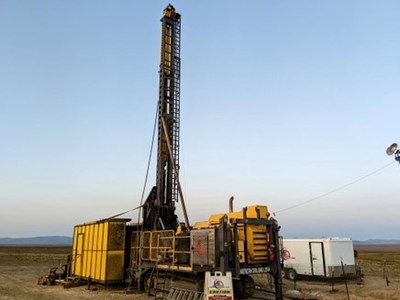 Iron Point Project Manager Geoff Sterling stated: "Building upon our 2019 drilling campaign, this year's program is designed to step out from the zone of Carlin-type gold mineralization intersected at the bottom of hole VM-008C within a thick sequence of Lower Plate silty carbonates. Additionally, we intend to complete an initial deep scout hole test of the Fairway Zone target. The Fairway target was identified during the comprehensive, integrated project-scale review undertaken during 2021, in which anomalies identified from new geophysical surveys and historical geochemical datasets coincide along a NNW trending corridor. The widespread gold-arsenic-mercury anomalies hosted in Upper Plate rocks throughout the Iron Point District are interpreted as structural leakage from a potential gold-bearing system at depth hosted in the more favorable underlying Lower Plate carbonate sequence. This same sequence of carbonate rocks host multiple major gold deposits across northern Nevada. Nevada King is well positioned to vector in to the source of the Carlin-type gold mineralization with this targeted deep drill program." 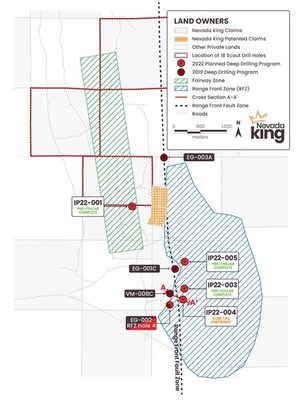 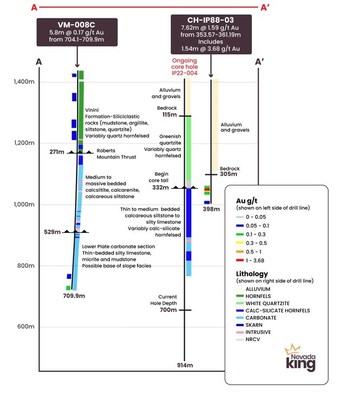 The Iron Point Gold Project is located 35km east of Winnemucca, Nevada, at the intersection of the Battle Mountain and Getchell gold belts and on trend from several world-class gold mines including Twin Creeks and Turquoise Ridge with a combined gold endowment of 52 Moz Au (NBMG Nevada Mineral Explorer Website, January 2022), and Marigold and Lone Tree with a reported gold endowment of 12 Moz (NBMG Nevada Mineral Explorer Website, January 2022).

Since the mid-1960s, the Iron Point district and surrounding area have been explored by numerous companies for different commodities, including gold and vanadium, beginning with Newmont in 1966 and continuing to Miranda Gold in 2008. Exploration efforts focused almost exclusively on shallow, Upper Plate hosted gold targets (<300m depths), whereas deeper potential for a Carlin-type gold deposit in Lower Plate rocks beneath the Roberts Mountain thrust remains virtually untested.

Some of the strongest Carlin-type gold pathfinder element geochemistry anomalism known in Nevada occurs at Iron Point along a north-trending zone 5 km long that is also anomalous in gold. Historic drilling encountered multiple intervals of significantly anomalous gold mineralization in Upper Plate stratigraphy. A small number of historical holes testing shallow Lower Plate stratigraphy exposed in the northern part of the property within an erosional window beneath the Roberts Mountain thrust also returned significantly anomalous pathfinder values, including an interval of Carlin-type gold mineralization. The Company's 2019 drilling which tested these Lower Plate rocks encountered an interpreted recumbent Zed-fold that is partially exposed along the range front fault. A similar geologic setting including recumbent Zed-folding along a range front fault approximately 40km northeast of Iron Point is host to extensive gold-mineralization at Newmont's Twin Creeks mine and partly based on this model. However, within the property's southern portion, only Nevada King's deep core hole VM-008C has to date encountered Carlin-type mineralization in rocks conclusively identified as Lower Plate.

Three of the five pre-collars are located close to a deep structural break striking north-south (the "Range Front Zone" or "RFZ") along the eastern margin of Iron Point mining district. As shown in Figure 2, the mineralized interval in Lower Plate stratigraphy encountered near the bottom of core hole VM-008C occurs on the west side (upthrown side) of the RFZ, while the three pre-collar holes are located on the east side within the down-thrown block. A ground-based gravity survey completed in 2020 provided higher resolution definition of the RFZ and indicated the down-thrown eastern block extends up to 3.5km eastward from the RFZ.  If favourable Lower Plate carbonates are intersected in this down-dropped block, the target area along and east of the RFZ will be greatly expanded. The three scout holes in this area are designed to step-out eastwardly from intervals of Lower Plate hosted gold and pathfinder mineralization intercepted in hole VM-008C and test the down-dropped fault block on the hanging wall (east) side of the RFZ.

RFZ pre-collar IP22-005, situated 600m to the NNE of drill hole VM-008C, is a 265m step-out of mineralization encountered in 2019 drill hole EG-001C. Grade-thickness contours of nearby historic drill holes indicate an ENE orientation to Au mineralization in the Upper Plate siliciclastic rocks, thus forming vector that coincides with a pronounced shoulder in the gravity dataset. EG-001C intersected the following zones of low-grade gold mineralization:

EG-002, the fourth planned deep test along the RFZ, is a 265m step-out to the south of VM-008C. This drill hole was pre-collared to 305m during the 2019 program but a core tail was not drilled at that time. A 610m core tail is planned during the 2022 program, bringing the total planned depth of this hole to 915m. This hole is situated within the same structural block as VM-008C and is expected to fully test prospective Lower Plate stratigraphy in this area west of the RFZ.

During 2021, Nevada King's geologists compiled and integrated extensive datasets including new (2020), separate geophysical surveys for Bouguer gravity, resistivity (CSAMT) , and aeromagnetics, along with historic soil and drill results, resulting in identification of a profound NNW-trending structural corridor, referred to as the "Fairway Zone" (Figure 2). This zone displays alteration and gold mineralization centered along an interpreted intrusive complex which extends over a distance of 4.5km, projecting under the post-mineral basalt flows to the north. Prospective Lower Plate stratigraphy is expected to be encountered in this area.

Drill hole IP22-001, collared 2.2km NNW of VM-008C, is the initial test of this target area. The pre-collar has been drilled and cased to a depth of 245m and will be extended with a diamond drill core tail to a planned total depth of 760m. Zones of quartz veining, decalcification, and silicification were encountered in the pre-collar indicating the presence of a hydrothermal system. Pending drill samples were submitted for analysis to American Assay Labs in Reno, Nevada, in late January 2022.

The scientific and technical information in this news release has been reviewed and approved by Calvin R. Herron, P.Geo., who is a Qualified Person as defined by National Instrument 43-101 ("NI 43-101").

Nevada King is the third largest mineral claim holder in the State of Nevada, behind Nevada Gold Mines (Barrick/Newmont) and Kinross Gold. Starting in 2016 through to the present day the Company has staked large project areas hosting significant historical exploration work along the Battle Mountain trend located close to current or former producing gold mines. These project areas were initially targeted based on their potential for hosting multi-million ounce gold deposits and were subsequently staked following a detailed geological evaluation. District-scale projects in Nevada King's portfolio include (1) the 100% owned Atlanta Mine, located 100km southeast of Ely, (2) the Lewis and Horse Mountain-Mill Creek projects, both located between Nevada Gold Mines' large Phoenix and Pipeline mines, and (3) the Iron Point project, located 35km east of Winnemucca, Nevada.

The Atlanta Mine is a historical gold-silver producer with a NI 43-101 compliant pit-constrained resource of 460,000 oz Au in the measured and indicated category (11.0M tonnes at 1.3 g/t) plus an inferred resource of 142,000 oz Au (5.3M tonnes at 0.83 g/t). See the NI 43-101 Technical Report on Resources titled "Atlanta Property, Lincoln County, NV" with an effective date of October 6, 2020, and a report date of December 22, 2020, as prepared by Gustavson Associates and filed under the Company's profile on SEDAR (www.sedar.com).

Tabulation of NI 43-101 Mineral Resources at the Atlanta Mine