Use of this site indicates acceptance of the Privacy Policy and Terms of Use.
The information on this Website is not reliable and not intended to provide tax, legal, or investment advice. Nothing contained on the Website shall be considered a recommendation, solicitation, or offer to buy or sell a security to any person in any jurisdiction.
CEO.CA members discuss high-risk penny stocks which can lose their entire value. Only risk what you can afford to lose.
© 2022 - CEO.CA Technologies Ltd.
@newswire/nevada-king-drilling-extends-gold-mineralization-200m ↻
0 online
Today This week
Search Subscribe
Members of @newswire/nevada-king-drilling-extends-gold-mineralization-200m

Cal Herron, Exploration Manager of Nevada King stated, "Drill holes completed by Nevada King along cross section A-A' (Released November 16, 2021) revealed potential for extending the 2020 Gustavson resource beyond the model's boundaries to both the south and east. Today's release of 10 new holes drilled south of section A-A' confirm the further extension of gold mineralization 200m to the south of the historic pit. As seen in both sections D-D' (Figure 2) and E-E' (Figure 3) the mineralized horizons display good continuity between the sections and along trend northward into section A-A'. Holes AT21-051 through AT21-053 drilled south of section E-E' indicate mineralization continues to the south within a fault block that was raised 17m relative to section D-D' (see Figures 1 and 3). South of this fault, the Atlanta Mine Fault zone was displaced westward. There is clearly a high probability that gold mineralization extends southward in ground that was historically never sampled nor drill-tested because of post-mineral cover and old structural models. 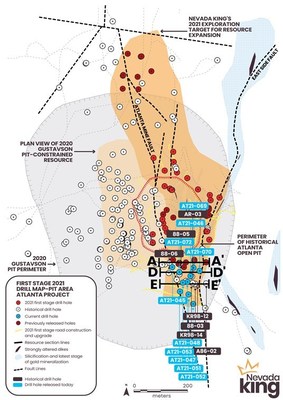 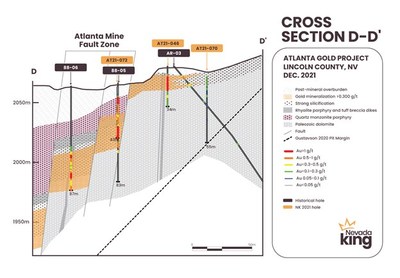 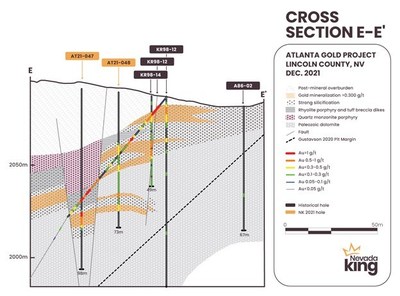 Assay results from Nevada King's drilling program south of the historical Atlanta pit are reported below. Intercept lengths for the vertical holes are close to true thickness given the low dip angle of mineralized zones being tested. Intercept lengths are reported as averaged, down-hole lengths utilizing a 0.30 g/t external cut-off grade.

Gold mineralization in all ten RC holes is identical to that previously reported in the other Nevada King  holes. Mineralization  is hosted within a gently west-dipping, strongly silicified collapse breccia horizon that developed directly underneath a clay-altered granitic sill along the contact with strongly brecciated dolomitic rocks. Flow-banded rhyolitic dikes and explosive tuff dikes composed of vesiculated rhyolite porphyry and strongly silicified dolomitic breccia clasts typically occur between the granitic sill and mineralized zone. In places we see strata controlled replacement-type mineralization within decalcified dolomite both adjacent to and along trend of silicified zones.

The scientific and technical information in this news release has been reviewed and approved by Calvin R. Herron, P.Geo., who is a Qualified Person as defined by National Instrument 43-101 ("NI 43-101").

The Atlanta Mine is a historical gold-silver producer with an NI 43-101 compliant pit-constrained resource of 460,000 oz Au in the measured and indicated category (11.0M tonnes at 1.3 g/t) plus an inferred resource of 142,000 oz Au (5.3M tonnes at 0.83 g/t). See the NI 43-101 Technical Report on Resources titled "Atlanta Property, Lincoln County, NV" with an effective date of October 6, 2020, and a report date of December 22, 2020, as prepared by Gustavson Associates and filed under the Company's profile on SEDAR (www.sedar.com).