Use of this site indicates acceptance of the Privacy Policy and Terms of Use.
The information on this Website is not reliable and not intended to provide tax, legal, or investment advice. Nothing contained on the Website shall be considered a recommendation, solicitation, or offer to buy or sell a security to any person in any jurisdiction.
CEO.CA members discuss high-risk penny stocks which can lose their entire value. Only risk what you can afford to lose.
© 2021 - CEO.CA Technologies Ltd.
@newswire/ng-energy-granted-environmental-license-for-sinu-9 ↻
0 online
Today This week
Search Subscribe
Members of @newswire/ng-energy-granted-environmental-license-for-sinu-9

VANCOUVER, BC, Sept. 10, 2021 /CNW/ - NG Energy International Corp. ("NGE" or the "Company") (TSXV: GASX) (OTCQX: GASXF) is pleased to announce all environmental requirements asked by the National Environmental Licensing Authority ("ANLA") have been met, and it has granted, through Resolution no. 1578 of September 6, 2021, the Environmental License which allows exploratory drilling area in the SN9 block, including the construction of civil works, production infrastructure and the construction of up to 11 locations for a total of 22 wells to be developed. 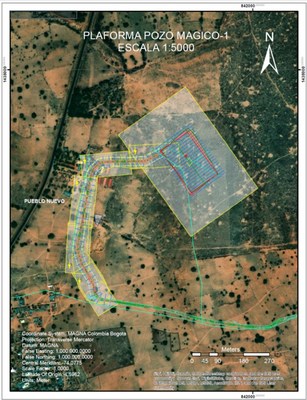 The Company will begin construction of the road and pad for the first well, Magico-1X, immediately. The drilling rig has been contracted and is standing by at a location near the concession, ready to be mounted and begin drilling by the first week of November 2021 under the direction of CPVEN. The Magico-1X well is the first well in a fully funded, four well drill program to be conducted by CPVEN in the coming months and will be followed by the drilling of Mago, Hechicero and Hechizo.

Executive Chairman of NGE, Ronald Pantin commented "The Company is pleased to have met all the environmental requirements requested by the ANLA and we as a management team are very excited to begin work on the Company's crown jewel block SINU-9. We will start our exploration program focusing on the Magico/Mago/Hechicero area, which shows strong evidence of gas bearing formations due to the presence of class 6 AVO interpretations with several flat and bright spots."

The Company's flagship SINU-9 is a 311,353 acre block located in northern Colombia in the Lower Magdalena and San Jacinto basins, which are two basins with the largest gas and light oil potential in the country. The block has been successfully tested for dry gas through the Hechizo-1 well, which was drilled to 4,500ft by Ecopetrol SA in 1992. The area has excellent infrastructure with open access to national oil and gas pipelines, and coverage of a reliable electricity grid.

The block is adjacent to Canacol Energy Ltd. (TSX: CNE), Colombia's largest independent gas producer, which has 2P reserves of 637 BCF and production of 172 MMcf/d for FY20201. Canacol Energy Ltd. recently drilled Aguas Vivas 1 and hit 402 ft of pay zone and tested 35.5 MMcf/d2 on its property immediately east of SINU-9. It then drilled Aguas Vivas 2 encountering 229 ft of net gas pay.3 Hocol, a subsidiary of Ecopetrol SA, recently drilled the Arrecife-3 well on its property to the south-east and test results showed gas production of 3-10 MMcf/d4 with no production of water.

The Company's working interest is 72%, subject to payment of ANH sliding scale royalties. The effective date of the resources reports is December 31, 2020. The chance of commerciality for the prospective resources (Prospects) is based on the product of the chance of discovery (geological chance of success) and the chance of development and is assessed at 30.3% to 31.5%. No risk has been assessed to the contingent resources and prospective resources (Leads), as the leads have to be upgraded to prospects before risk can be addressed. Due to sparsely shot 2-D seismic data (31 2-D lines of 752 km), there is insufficient data for coverage to map certain closures. However, the block has 12 wells drilled previously with good geological data for correlation. The Company would require sufficient funding to fulfill the committed work program and development if any discoveries are made.  For more information, see the Company's news release dated March 18, 2021, titled "NG ENERGY ANNOUNCES CONTINGENT AND PROSPECTIVE RESOURCES IN SINÚ 9 AND MARIA CONCHITA BLOCKS".

Petrotech and Associates Ltd., an independent qualified reserves and resources evaluator, has reviewed the contents of this news release and found it to be prepared in accordance with National Instrument 51-101 Standard of Disclosure for Oil and Gas Activities ("NI 51-101").

NG Energy International Corp. is a publicly traded E&P company on a mission to provide a clean and sustainable solution to Colombia's energy needs. The Company intends on executing this mission by producing and bringing gas to the premium priced Colombian gas market from its concessions, SN-9, a 311,353 acres block which is adjacent to Canacol Energy Ltd.'s Nelson field, as well Maria Conchita, a 32,518-acre block located in the region of La Guajira. NGE's team has extensive technical expertise and a proven track record of building companies and creating value in South America. For more information, please visit SEDAR (www.sedar.com) and the Company's website (www.ngenergyintl.com).

Except for the statements of historical fact, this news release contains "forward-looking information", within the meaning of applicable Canadian securities legislation, that is based on expectations, estimates and projections as at the date of this news release. Wherever possible, words such as "anticipate," "believe," "expects," "intend" and similar expressions have been used to identify the forward-looking statements. The forward-looking information in this news release includes, but is not limited to, statements regarding the completion of the operations described herein, drilling operations, receipt of governmental permits, licences or approvals, estimations of gas production, completion and installation of the gas pipeline and related plant facilities.

This news release discloses estimates of the Company's prospective and contingent resources. Contingent resources are those quantities of petroleum estimated, as of a given date, to be potentially recoverable from known accumulations using established technology or technology under development but which are not currently considered to be commercially recoverable due to one or more contingencies.

The resource estimates presented above are subject to certain risks and uncertainties, including those associated with the drilling and completion of future wells, limited available geological and geophysical data and uncertainties regarding the actual production characteristics of the reservoirs, all of which have been assumed for the preparation of the resource estimates. 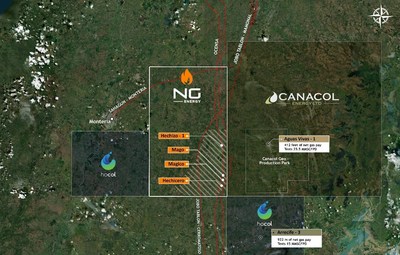