Use of this site indicates acceptance of the Privacy Policy and Terms of Use.
The information on this Website is not reliable and not intended to provide tax, legal, or investment advice. Nothing contained on the Website shall be considered a recommendation, solicitation, or offer to buy or sell a security to any person in any jurisdiction.
CEO.CA members discuss high-risk penny stocks which can lose their entire value. Only risk what you can afford to lose.
© 2016 - Pacific Website Company Inc.
@newswire/northern-shield-acquires-extensive-alteration-system ↻
0 online
Today This week
Search Subscribe
Members of @newswire/northern-shield-acquires-extensive-alteration-system

OTTAWA, ON, Aug. 4, 2020 /CNW/ - Northern Shield Resources Inc. ("Northern Shield" or the "Company") (TSX-V: NRN) is pleased to announce that it has acquired two licences through online-staking and, through an option agreement, also acquired the right to earn a 100% interest in an adjacent licence (the "Merasheen Option") on Merasheen Island in Placentia Bay, Newfoundland, about 60 km northeast of the Company's Root & Cellar gold project. Collectively, the three licences (the "Merasheen Property" or the "Property") cover 27 square kilometres. 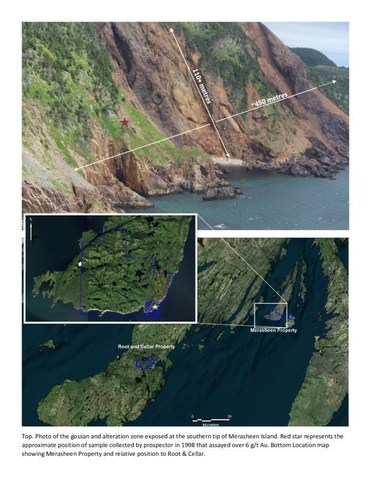 The Property is being explored for gold and silver with local anomalous lead and zinc. There is very limited information and data available on the area, but what is found in the Mineral Occurrence Database of Newfoundland, and previously-filed assessment reports suggests that the target has characteristics of both bulk tonnage high sulphidation epithermal gold-silver systems and an Eskay Creek-style, precious-metal-rich, Volcanogenic Massive Sulphide deposits.

"within an extensive zone of intense sericite-silica-pyrite alteration that is well exposed along a 1.4 km coastal section, approximately 500 m wide (across strike) at its southern end. It has been traced inland to the north for approximately 3 km along strike. Grab samples collected in 1998 from shoreline outcrop of pyrite-quartz veinlets hosted in semi-massive to massive pyrite returned assays up to 6.8g/t Au and 314g/t Ag. Anomalous gold values from 0.1g/t to 2.0g/t in association with anomalous As, Pb, Zn and elevated Mo and Hg are also reported from other samples collected along the 1.4 km coastal section. Galena and sphalerite occur in this zone associated with abundant disseminated pyrite all hosted within a grey rhyolite or dacite have been reported."

Assays reported in this press release are not from samples collected or assayed by Northern Shield and hence have not been independently verified by Northern Shield. In order to confirm the existence and extent of the reported mineralization and alteration, the Property was visited last week by Mr. Bryan Sparrow (P. Geo., Eastern Geo Services Inc.), a registered professional geoscientist (PEGNL) and a Qualified Person under the National Instrument 43-101, on behalf of Northern Shield, The shoreline exposure is accessible by boat. The alteration zone extends from the shoreline vertically upwards for ~110 m and is largely composed of deeply weathered sulphidic, gossanous material that has been traced inland for approximately 2.5 kilometres. It has been noted to be at least 450 m wide, confirming historical government reporting.  Abundant, intensely deformed quartz veining and iron-carbonate alteration was also noted from the property visit.

"This is an extremely attractive precious metal target that is deserving of a thorough investigation which we can advance steadily without impacting our other flagship properties. The intensity of the alteration and mineralization and the reported grades from only a handful of samples suggest to us that there is more to this occurrence than is currently known. Mineralized systems with the apparent scale of Merasheen are not common. Early stage investigation is logistically simple and relatively inexpensive but could nonetheless lead to potentially rapid advancement of the project, if successful. This project, along with the recently announced acquisition, an epithermal gold target 150 km west of Shot Rock in Nova Scotia, provide the Company with a pipeline of projects that capitalize both on our growing geological understanding of the terrane and the increasing investor interest in these underexplored, yet accessible, regions of Atlantic Canada.  While remaining focused on advancing Shot Rock and Root and Cellar we felt it was important to identify and tie down similar prospects at this time."

Under the terms of the Option Agreement, which is subject to TSX-V approval, Northern Shield can earn a 100% interest in the Merasheen Option by incurring $2,000,000 in expenditures within four years. The Option Agreement also contains cash payments totalling $115,000 and share issuances totalling 1,600,000 Company shares to the vendor over five installments during the four-year period. The vendor will retain a 1.5% NSR of which 1% can be bought back by Northern Shield for $2M. The first-year commitments are modest and can be extended at the Company's discretion.

Root & Cellar Gold - Program Update
The soil sample program at Root & Cellar is approximately three-quarters complete, with nearly 900 samples collected.  Approximately 550 samples are in the lab, with the remaining samples in transit. As soon as enough soil assays are received to make preliminary interpretations, a more detailed update will be provided, along with an outline of the next phase of exploration at the Root & Cellar Gold Property.

This press release and program has been reviewed Christine Vaillancourt, P. Geo., the Company's Chief Geologist.

Northern Shield Resources Inc. is a Canadian-based company focused on generating high-quality exploration programs with experience in many geological terranes. The Company is known as a leader in executing grass-roots exploration programs using a model-driven approach. Seabourne Resources Inc. is a wholly-owned subsidiary of Northern Shield focussing on epithermal gold and related deposits in Atlantic Canada and elsewhere.

This news release contains statements concerning the exploration plans, results and potential for gold and silver deposits, and other mineralization at the Company's Merasheen Property in Newfoundland, geological, and geometrical analyses of the properties and comparisons of the properties to known epithermal gold deposits and other expectations, plans, goals, objectives, assumptions, information or statements about future, conditions, results of exploration or performance that may constitute forward-looking statements or information under applicable securities legislation.  Such forward-looking statements or information are based on a number of assumptions, which may prove to be incorrect.