Use of this site indicates acceptance of the Privacy Policy and Terms of Use.
The information on this Website is not reliable and not intended to provide tax, legal, or investment advice. Nothing contained on the Website shall be considered a recommendation, solicitation, or offer to buy or sell a security to any person in any jurisdiction.
CEO.CA members discuss high-risk penny stocks which can lose their entire value. Only risk what you can afford to lose.
© 2021 - CEO.CA Technologies Ltd.
@newswire/northern-shield-discovers-further-gold-mineralization ↻
0 online
Today This week
Search Subscribe
Members of @newswire/northern-shield-discovers-further-gold-mineralization

OTTAWA, ON, July 27, 2021 /CNW/ - Northern Shield Resources Inc. ("Northern Shield" or the "Company") (TSXV: NRN) is pleased to the announce the identification of additional IP geophysical anomalies along with the discovery of additional gold mineralization in outcrop from the Conquest Zone at the Root & Cellar Gold-Silver Project ("Root & Cellar" or the "Project") in Newfoundland. The Company can earn a 100% interest in the Property, which is being explored for epithermal gold-silver mineralization and porphyry copper deposits. 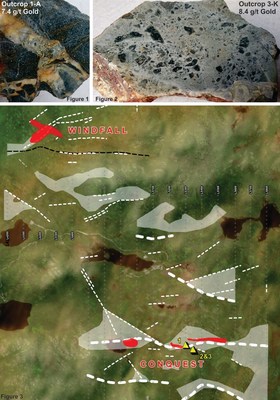 Prospecting
Prospecting and ground truthing of some of the near surface IP anomalies identified from the recently completed ground geophysical survey at the Conquest Zone (see press release dated June 29, 2021) has uncovered additional gold mineralization in outcrop with assays up to 8.4 g/t gold and nine of the eighteen samples from three outcrops assaying greater than 1 g/t gold. These showings consist of sulphide-bearing and strongly silicified outcrops, locally brecciated and quartz veined (Figures 1 & 2).

These new discoveries were made in the vicinity of grid lines 5300E and 5400E (Figure 3) where IP results show a chargeability anomaly coming to surface. Chargeability can be indicative of the presence of disseminated sulphides, which has now been confirmed with the prospecting at this location. Numerous other chargeability anomalies remain untested within the survey grid.

The discovery of these mineralized outcrops has increased the exposed width of the Conquest Zone from 40 metres to over 80 metres at this location. The Conquest Zone, which is believed to be a sub-vertical feature, has so far been traced on surface for 650 metres with grades up to 48 g/t Au (see press release dated May 19, 2019). The ground IP survey shows a coincident chargeability anomaly with a strike length of 1,100 metres and open at both ends (see details below).

A 2,500 metre drilling program is planned for the fall with and a drill permit application is underway. The drilling will focus on the Conquest Zone but the Windfall Zone along with IP targets to the south east of Windfall will also be tested.

IP Survey
In addition to the IP anomalies coinciding with the Conquest Zone (see press release dated June 29, 2021) modelling of the data has shown a modest IP anomaly underlying the Windfall Zone (Figure 3) as well as series of sub-parallel chargeability anomalies extending approximately one kilometre southeast from Windfall. These targets appear to be flat-lying and in general do not come to surface but they may still be related to the Windfall Zone. They are associated with very resistive rocks and collectively cover a substantial area.

"These are very encouraging as not only do they expand the footprint of the Conquest Zone, but they indicate that at least some of the IP anomalies are indeed gold-bearing. With multiple IP anomalies in the Conquest Zone over a strike length of 1,100 meters and numerous other similar untested targets within the survey grid, we very much like the direction this is going."

The survey program at Root & Cellar was contracted to Clearview Geophysics of Brampton, Ontario, and was overseen by Joe Mihelcic, P. Geo. and a qualified person under NI 43-101. This press release has also been reviewed by Christine Vaillancourt, P. Geo. and the Company's Chief Geologist. Samples from the program were analyzed by Eastern Analytical Ltd of Springdale Newfoundland for Au by Fire Assay with ICP-AES finish. All standards, blanks and duplicates meet targeted values.