Use of this site indicates acceptance of the Privacy Policy and Terms of Use.
The information on this Website is not reliable and not intended to provide tax, legal, or investment advice. Nothing contained on the Website shall be considered a recommendation, solicitation, or offer to buy or sell a security to any person in any jurisdiction.
CEO.CA members discuss high-risk penny stocks which can lose their entire value. Only risk what you can afford to lose.
© 2016 - Pacific Website Company Inc.
@newswire/northern-shield-intersects-large-epithermal-veins-at ↻
0 online
Today This week
Search Subscribe
Members of @newswire/northern-shield-intersects-large-epithermal-veins-at 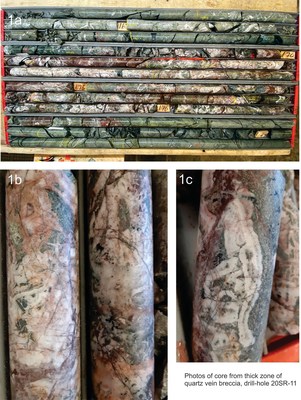 To date, approximately 700 metres of the planned 2,500 to 3,000 metre Phase 2 diamond drilling program has been completed at the Highway Zone, with the third hole still in progress at the time of writing.

Of significance, the third drill hole of the second phase of drilling, drill hole 20SR-11, intersected significant widths of veining between a down-hole depth of 162 to 177 m (Figure 1a). This intercept consists of small-scale crustiform-colloform banded stockwork veins composed of quartz-chalcedony and jasperoid from 162 to 166 metres. This was followed by three metres of a silicified breccia zone with small-medium sized crustiform-colloform quartz-chalcedony veins with dark grey rims. The last eight metres, from 169 m to 177 m, consisted almost entirely of brecciated colloform-crustiform banded quartz veins (Figure 1b and 1c) containing quartz, chalcedony, hematite, jasperoid, adularia, pyrite and an unidentified silver-coloured mineral. True width of the vein system is not known at this time.

The first drill hole of this second round of Shot Rock drilling, 20SR-09, targeted the continuity of gold-bearing stockwork observed at surface but did not hit significant veining or mineralization. Drill hole 20SR-10 was positioned to intersect the same structure that hosts the high-grade gold mineralization reported from 20SR-04 from the first phase of drilling (see press release February 28, 2020) but approximately 75 m deeper. Several intervals of stockwork and disseminated sulphides were observed over intervals 85-89 m, 142-148 m and 164-174 metres. The latter is at the projected intercept depth of the targeted structure. Some of the veins contain adularia and sulphides and are similar to those observed near the gold mineralization in drill hole 20SR-04.

A drill hole plan map (Figure 2a) accompanying this release shows the collar locations and drill hole traces for holes completed to date. Pictures showing representative sections of core from some of the above-mentioned intervals are also appended to this news release.

"We are very pleased with the visual observations to date from the second phase of drilling program at Shot Rock, especially drill-hole 20SR-11, which is on-going. The significant increase in vein density compared to the other nearby drill-holes is impressive and suggest we are vectoring in the right direction. The observed presence of the mineral adularia in the last two holes is also a good sign, as on-going research being conducted at St Mary's University in Halifax, from samples from the Phase 1 drilling program, shows a good correlation between gold (electrum) and adularia."

The drilling program is contracted to Logan Drilling Group based in Stewiacke, Nova Scotia, and is overseen by Christine Vaillancourt, P. Geo., the Company's Chief Geologist and a Qualified Person under National Instrument 43-101.